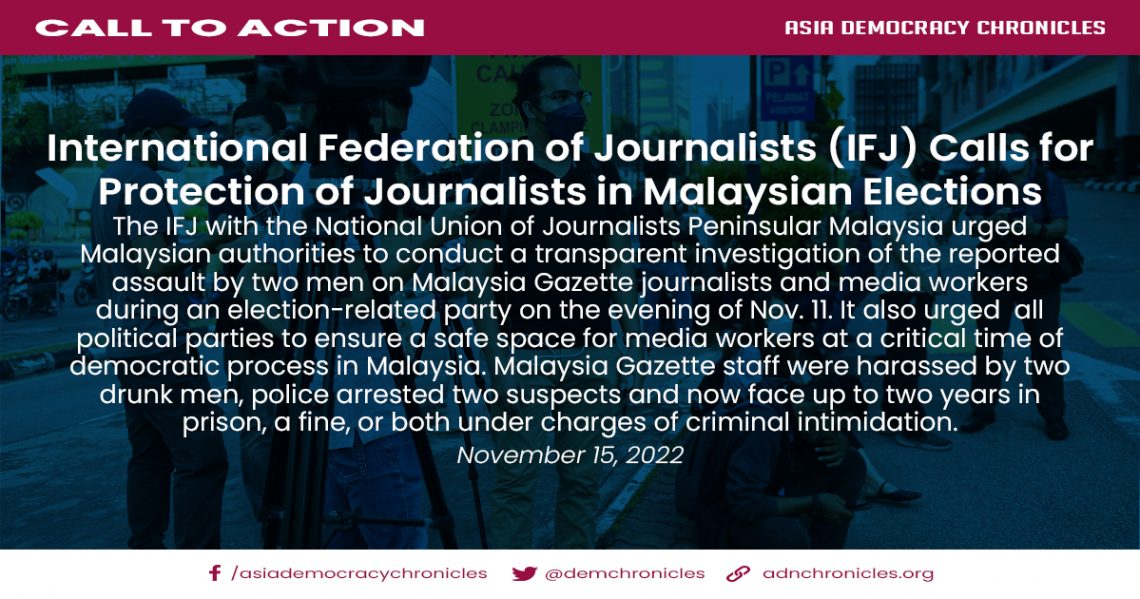 On November 12, police announced the arrest of two men accused of threatening and abusing Malaysia Gazette journalists and media workers. The International Federation of Journalists joins its Malaysia affiliate, the National Union of Journalists Peninsular Malaysia (NUJM), in condemning the incident and urging media houses to ensure the safety and security of staff during coverage of Malaysia’s upcoming general election.

Negeri Sembilan state Police Chief Draffir Mohd. Yussof said two men had been arrested for allegedly threatening and abusing Malaysia Gazette staff. Yussof said the two men were believed to be drunk when they began pushing the media workers, throwing glasses, shoes and wine bottles during an election-related party on the evening of November 11.

In a video posted to the news outlet’s YouTube channel, two men can be seen confronting journalists, throwing projectiles and attempting to intimidate them. Police say they arrested two suspects close to midnight the day of the incident. They face up to two years in prison, a fine, or both under charges of criminal intimidation.

Last week, the NUJM released its official guidelines for covering Malaysia’s upcoming elections. In the accompanying  statement, the NUJM stressed the importance of fair, impartial and high-quality reporting going into the election, and provided information to journalists on how to best protect oneself when covering the election.

NUJM said: “Journalists regardless of their publication should be treated equally and be given access to information without discrimination. We also would like to advise our peers out there to voice out to NUJM or relevant parties if they encounter hostile behaviour towards them while working.

The IFJ said: “The IFJ urges the authorities to conduct a transparent investigation into this case and to remind all political parties to ensure a safe space for media workers at a critical time of democratic process” #