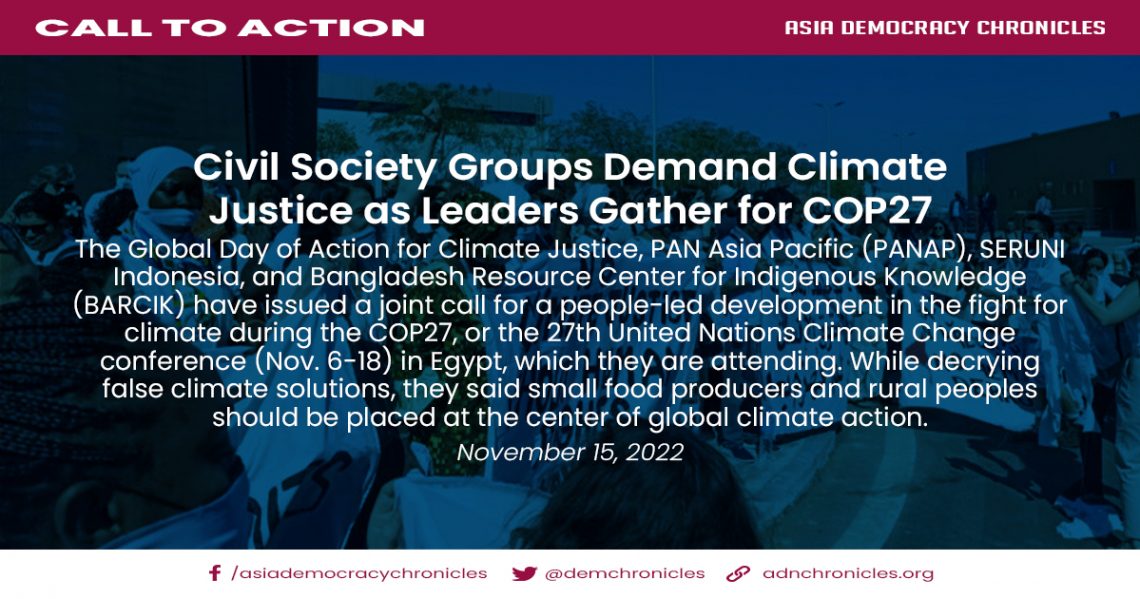 Today, the Global Day of Action for Climate Justice, PAN Asia Pacific (PANAP), SERUNI Indonesia, and Bangladesh Resource Center for Indigenous Knowledge (BARCIK) join social movements gathered in Egypt to demand climate justice and an end to climate imperialism. As #COP27 is  again shaping up to be a platform for world leaders to endorse corporate greenwashing and intensified plunder and pollution through false climate solutions, it becomes more urgent than ever to assert the radical transformation of food systems for the people and the planet.

Capitalist industrial agriculture contributes up to one-third of greenhouse gas (GHG) emissions. Synthetic fertilizers and pesticides have a large carbon footprint—both are derived from fossil fuels and are known to release ground-level GHG emissions. The global climate impact of nitrogen fertilizer is estimated to exceed that of commercial aviation. Meanwhile, manufacturing one kilogram of pesticide is estimated to require 10 times more energy than one kilogram of nitrogen fertilizer.

Chemical-intensive agriculture creates a vicious cycle—agrochemicals production and use drive climate change, climate change-related pressures lead to more pests and decreased pesticide efficacy, resulting in even greater pesticide use. Yet, agrochemical and seed transnational corporations (TNCs) are given free rein to use the climate crisis to sell techno-fixes such as genetically-modified crops or “optimizing” fertilizer and pesticide use through so-called “climate-smart” and “precision” agriculture. The UN Food and Agriculture Organization (FAO) even has an agreement to collaborate with powerful pesticide lobby group CropLife International on broad areas of work, compromising the agency’s commitment to reducing reliance on agrochemicals.

Meanwhile, monopoly corporate control over land remains unaddressed, with no discussions on mechanisms to ensure that small food producers and indigenous peoples—who are at the forefront of sustainable agricultural practices and environmental conservation—enjoy their rights to land and resources. Worse, climate imperialism is worsening the massive displacement of farming and indigenous communities. Land grabbing has intensified in the name of “nature-based solutions,” including carbon capture and offsetting schemes. Financial managers and corporations are putting their money into climate mitigation mechanisms to display their supposed sustainability efforts as the climate crisis worsens. Under such “green financing,” PANAP has monitored 719,200 hectares invested for monocrop plantations and carbon offsets. Agribusinesses notorious for land grabbing and deforestation are also using “green bonds” to expand their operations. At #COP27, major global food firms announced a roadmap to eliminate deforestation in the food supply chain by 2025, even if they have failed to do so after they made a similar declaration in 2010. These same corporate food giants like Cargill have been repeatedly linked to the immense destruction of the world’s forests such as in the Amazon.

It cannot be overemphasized that rural communities in the Global South bear the brunt of the climate crisis, their ability to produce food impaired by extreme weather events, ecological collapse, and chemical pollution. It is estimated that rural families in the Global South spend billions of dollars per year to address the climate crisis, while rich countries continue to fail to deliver their commitment of USD 100 billion per year by 2020 to assist those most vulnerable to climate-linked impacts and disasters. By 2030, a new estimate pegs the poor countries’ external financing needs for climate action at USD 1 trillion. Worse, climate financing often ends up as loans, further pushing poor countries into debt bondage.

PANAP, SERUNI and BARCIK are part of the Asian People’s Exchange for Food Sovereignty and Agroecology (APEX) and attending #COP27 to highlight that people-led development is crucial in the fight for climate justice. Schemes of imperialist powers to intensify plunder and pollution for capitalist profits must be exposed. Rural people’s movements must continue to assert the right to land, food sovereignty, and agroecology, and resist corporate control over food and agriculture. The demands of small food producers and rural peoples should be placed at the center of global climate action. Climate-resilient food and farming systems will never materialize from profit-hungry corporations that have pushed the limits of our planetary boundaries. Instead, it will come from social movements which push the limits of what the people can together achieve.

Land and Agroecology for the People, Climate Justice Now!