Rules threatening people with fines of up to NT$2 million if they break quarantine to vote breaches people’s political rights, the group said 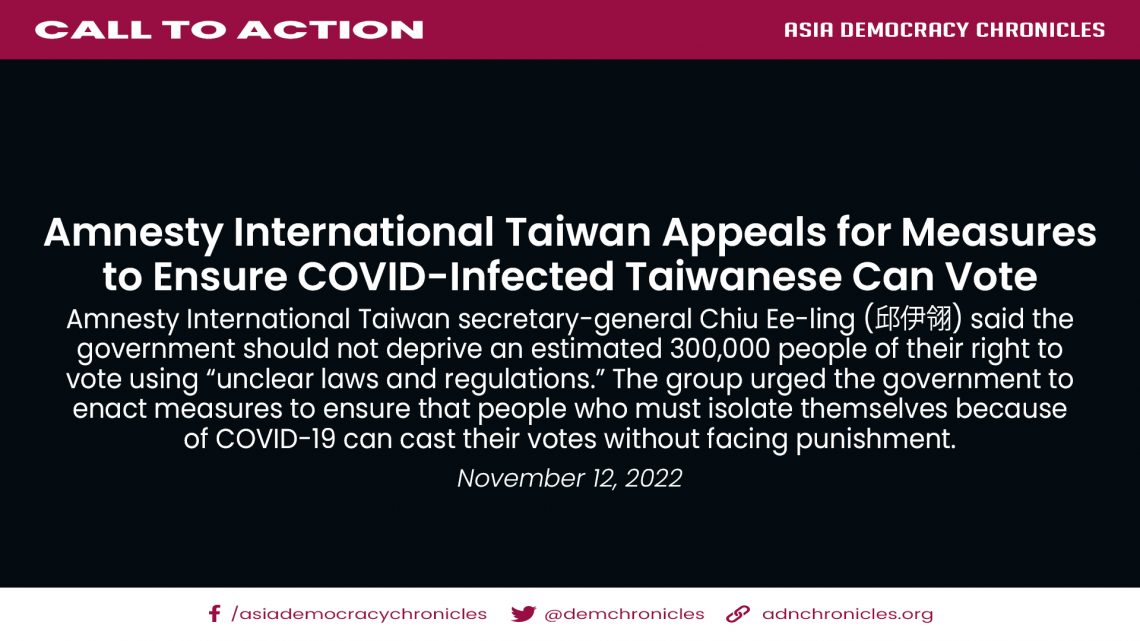 Prohibiting people with COVID-19 from voting in local elections on Nov. 26 — with an estimated 300,000 facing the prospect of fines — violates legally protected political rights, Amnesty International Taiwan said on Wednesday.

The Central Epidemic Command Center (CECC) on Tuesday said that people who break their mandatory quarantine to vote would face fines of up to NT$2 million (US$62,686) under the Special Act for Prevention, Relief and Revitalization Measures for Severe Pneumonia with Novel Pathogens (嚴重特殊傳染性肺炎防治及紓困振興特別條例規定).

Current rules state that people who test positive for COVID-19 must isolate for seven days.

However, effective Monday next week, the isolation period is to be reduced to five days.

The election commission cited Article 17 of the Civil Servants Election and Recall Act (公職人員選舉罷免法), which states that voters must cast their ballot “at the polling station at the place of domicile unless otherwise prescribed.”

It said that “unless otherwise prescribed” refers only to allowing election officials to vote at the polling station where they are working.

Amnesty International Taiwan secretary-general Chiu Ee-ling (邱伊翎) said the government should not deprive an estimated 300,000 people of their right to vote using “unclear laws and regulations.”

None of the laws cited by the government justifies the decision to prohibit people who test positive for COVID-19 from exercising their right to vote, she said.

The government’s policy breaches Article 25 of the The International Covenant on Civil and Political Rights, which states that every citizen shall have the right and the opportunity to vote, and be elected in genuine and periodic elections, the group said.

The UN convention was adopted in Taiwan in 2009, even though the country is not a UN member.

Amnesty called on the government to enact measures to ensure that people who must isolate themselves because of COVID-19 can cast their votes without facing punishment. #

Can military talks between Bangladesh and Myanmar be a prelude to larger solutions?