Nepal: Nepal’s Election Commission Must Rescind Its Crackdown on Online Freedom of Speech and Expression 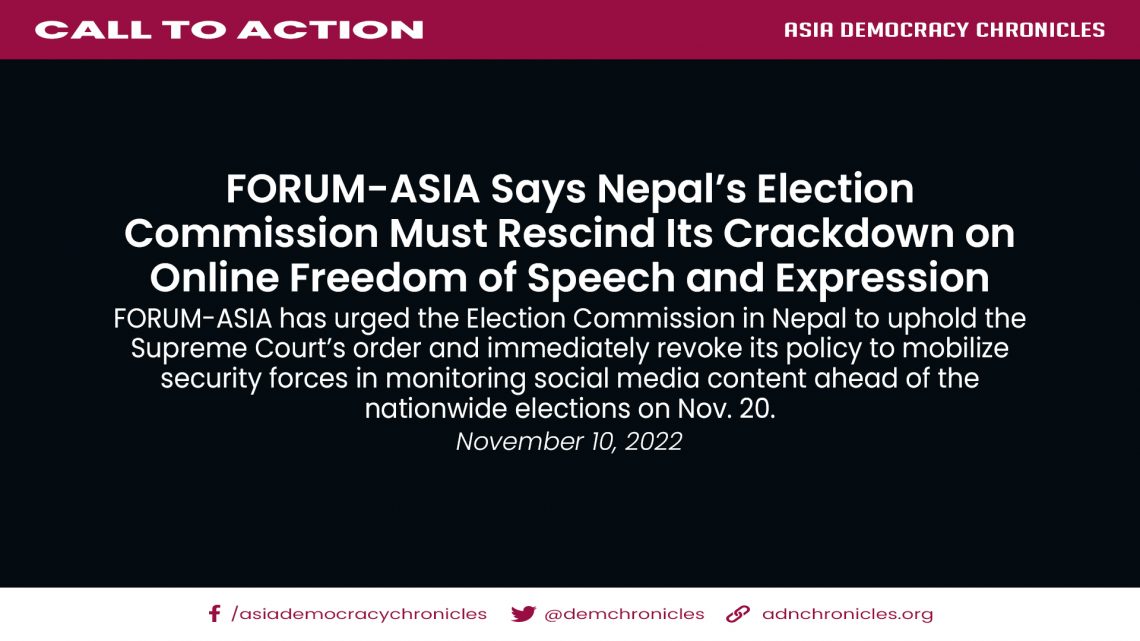 (Bangkok/Kathmandu – 8 November 2022) – The Asian Forum for Human Rights and Development (FORUM-ASIA) is deeply concerned over Nepal’s Election Commission’s policy to monitor social media content for the upcoming nationwide elections on 20 November 2022. Mobilising security forces to regulate the content on social media is a disturbing precedent since it heavily tramples on the constitutionally-guaranteed right to free speech and expression.

The Election Commission formed a  separate mechanism, called the Press Office, constituting representatives from the Nepal Army, Nepal Police, Advertisement Board and the Nepal Press Council to monitor online and social media content. The Office led by a joint secretary of the Government will tightly monitor social media discourses on the upcoming elections and ask anyone posting “misleading information” to remove such content and also recommend legal action against such individuals. Several organisations, including the Federation of Nepali journalists and Freedom Forum, have condemned the Election Commission for this move as deploying security personnel is tantamount to the infringing constitutional freedom of speech and expression.

“While managing misinformation and fake news is crucial during the elections, a monitoring mechanism such as the Press Office intended to intimidate the public and stifle a healthy public discourse on elections directly contravenes with the right to freedom of expression and speech and the right to freely communicate as enshrined respectively in Article 17 (2) (a) and Article 19 of the Constitution of Nepal 2015”, said FORUM-ASIA.

In a statement issued on 25 October, the Election Commission cautioned the public from making negative comments about prominent leaders running for the elections. The statement condemned the #NoNotAgain campaign – a social media campaign, on Facebook and Twitter, run largely by Nepalese youth, calling to boycott the “tried and tested” political leaders, particularly those who have become prime ministers at least once.  The #NoNotAgain campaign has amassed more than 31k likes and 38k followers and has spurred a discourse on supporting independent candidates, as opposed to veteran leaders. The Election Commission has deemed the group as “fake” and in violation of Section 47 of the Electronics Transaction Act 2008, Section 23 (1) of the Election (Crime and Punishment) Act 2017, and several provisions of the Election Code of Conduct.  It further warns that perpetrators could face imprisonment for up to five years and a fine of around USD 750 if the fake pages or groups are not immediately removed and such acts are not promptly stopped.

FORUM-ASIA welcomes the interlocutory interim order issued by Nepal’s Supreme Court against the Election Commission, asking it to not take any action against the #NoNotAgain campaigners. We call on the Election Commission in Nepal to uphold the Supreme Court’s order and immediately rescind its policy to mobilize security forces in monitoring social media content and end its crackdown on the freedom of speech and expression. The Commission must consult with the broader civil society actors, including constitutional experts and human rights lawyers to review its monitoring mechanism and have a rights-based procedure in place. It must also ensure that elections are free and fair; and that all citizens, especially the youth, can participate without fear, intimidation, or retaliation. #