Those using India's Right to Information Act to seek public accountability are finding themselves up against all kinds of barriers. Some have received death threats.

ahesh Boricha is unable to sleep at night. He is haunted by the violent death of his father on March 2, 2021. On that day, 10 men carrying knives, swords, and iron pipes stormed into Boricha’s family home and attacked his father, Amrabhai. The 50-year-old was killed, while Nirmala, Mahesh’s sister, was injured.

Amrabhai Boricha was a known Right to Information (RTI) activist in their small village in India’s westernmost state of Gujarat. At the time of his murder, he had a running dispute with the men who would become his assailants. The quarrel arose out of Amrabhai’s RTI work on land rights for marginalized castes like the Dalits, of which he was a part. But he had also been receiving threats because of his other RTI activities, leading him to seek police protection. Initially, members of the State Reserve Police Force were assigned to protect him. By the time he was murdered, he had been endorsed for protection to “Gram Rakshak Dal jawans” or village defense volunteers.

Believing in the value of his father’s work, Mahesh shifted from being a private contractor for the Indian railways to being an RTI activist. But he carries more than the weight of his father’s legacy on his shoulders.

“I face a lot of pressure in this work,” says Mahesh. “I quit my job and now look after whatever little farmland we have so that I can also follow the path shown by my father. My RTI work is still ongoing, (but) I strongly feel that I can even be killed. When you go against the system, there is always a fear.”

In truth, his father’s tragic fate is not uncommon. Since the inception of India’s Right to Information Act in 2005, at least 479 individuals have faced attacks, and harassment, and have been killed in their quest for information from the country’s public authorities and administrative bodies. A few others have reportedly been “banned for life” — including one penalized financially — from seeking information from the government and its agencies.

Indeed, nearly 20 years after Indians hailed the enactment of a law that reaffirmed the value of transparency in government, authorities both local and national are now digging in their heels and punishing those who are trying to put the legislation into action.

Activist and transparency campaigner Anjali Bhardwaj says that the “bans” have taken different forms. “One is that someone has been told that henceforth there is a ban on seeking information,” she says. “There are some cases where the concerned department or the public authority from which information was sought has been told by authorities above that they do not need to answer these queries anymore. So there are different orders for different people, but effectively blocking people’s right to information.”

Bhardwaj stresses that these are “totally illegal” orders because there is no provision under India’s RTI law to empower information commissions to do this. 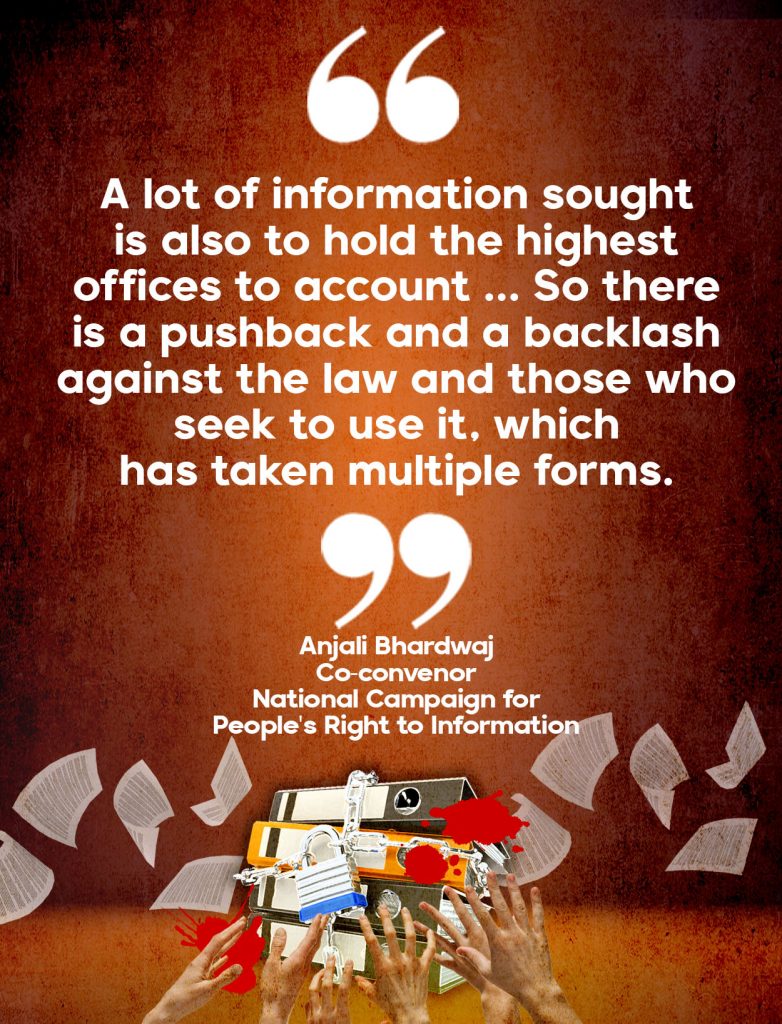 “Right to information is a fundamental right,” she points out. “Unless something is exempt under the law or it can be proven that this withheld information falls under Section 8 of the Act — which provides for specific conditions where information cannot be disclosed — information has to be provided.”

The RTI Act came into force after a long-running people’s movement, led by people’s organizations such as the Mazdoor Kisan Shakti Sangathan (MKSS), clamoring for a transparency law. According to the law’s provisions, any citizen of India is allowed to request information from a “public authority,” where such information must be provided by offices or departments of the state within a time-bound period.

But in the past several years, the landmark statute has faced several roadblocks. Politicians, government agencies, and the judiciary have watered down the law’s provisions. Crucial appointments have been delayed, and the requests of citizens seeking information have been arbitrarily denied.

Bhardwaj is a co-convenor of the  National Campaign for People’s Right to Information. She says that every year, around four to six million RTI applications are filed across India, “which is actually the highest number anywhere globally.” She says that their research shows that the bulk of these RTI applications are by people asking about their basic rights, and involve all sorts of issues such as rations, pensions, water supply, medicines, and hospitals.

“A lot of information sought is also to hold the highest offices to account,” Bhardwaj says. “So people are asking about the PM Cares funds (where the money came from and where it went), people are asking about electoral bonds, corruption, Rafale (jets for the air force), and so on. So there is a pushback and a backlash against the law and those who seek to use it, which has taken multiple forms.”

Schoolteacher Amita Mishra, for instance, is now among those “barred for life” from exercising their right to seek information. Mishra, who had been a teacher in a semi-governmental school in the Gandhinagar district of the state of Gujarat, says that she had been facing harassment since her appointment there in 1996. She believes she was harassed because colleagues did not like her way of doing things, and later on because they wanted to stop her from acquiring teaching seniority. But it was only after cases were filed against her that Mishra decided to educate herself on the RTI Act and start filing RTIs.

From 2017 to date, Mishra has filed close to 40 RTI applications, including seeking information about her salary and service book. She alleges that a parent in cahoots with the school administration registered an “attempt to murder” criminal case against her for purportedly threatening a pupil.

Yet Mishra says that when she sought transparency into these matters, the public information officer did not answer her RTI queries and instead noted that she was “cantankerous” and “harassed an institution in which she was working.” It was also claimed that Mishra was “in the habit of putting false allegations” and was abusing the system by seeking the same information repeatedly.

But many others who tried submitting RTI queries have suffered more than lifetime bans. Just last June 2022, Ranjeet Soni was fatally shot inside the compound of a local governmental office in India’s heartland central state of Madhya Pradesh. Soni, a contractor in a state works department, had been filing RTI applications to obtain information on government expenditure and corruption within the public works department. Through his work, he obtained details pertaining to the construction of roads, funding and allocations in government hospitals, and other such crucial insights into public sector spending.

Two months after Soni’s death, an activist was killed after he used the RTI law to take on illegal constructions by local builders, this time in the western state of Gujarat. To date, at least 100 RTI activists have been murdered, 182 RTI assaulted, and 188 harassed or received serious threats.

Anjali Bhardwaj and other rights campaigners have been asking State-level Information Commissions to try publicizing the cases filed by RTI activists who are killed or threatened. At the very least, they argue, this would ensure greater public scrutiny of the issues the slain activists were looking into.

“There is a very clear attempt to not appoint information commissioners as far as possible,” she continues, “which means that people’s appeals and complaints keep pending, and they have to wait for a very long period of time to even get their cases heard. So this is a very big problem.”

Comments Bhardwaj: “The whole purpose of the information commission is that if a government doesn’t want to share the information which is inconvenient because it shows their misgovernance or wrongdoings or corruption, then people can approach the commission. So commissions need to be kept independent from the government.”

Yet for all the barriers and threats thrown their way, many Indians remain adamant about getting the information they seek from the government, as promised by the law.

Although he confesses to feeling afraid at times, Mahesh Boricha has been using the RTI law to create an impact at the micro-level.  He recounts with a hint of pride, “A district judge was recently suspended by the Gujarat high court after I filed an RTI just to find out how many cases of caste atrocities and caste violence from 2015 to 2022 had special prosecutors and lawyers given to victims for free.”

Mahesh says that he “got inspired by my father, who refused to back down.” He also points to the late Indian jurist B.R. Ambedkar, who also hailed from one of India’s Dalit castes, as someone he would like to emulate.

“We believe in Babasaheb Ambedkar and asserting our rights through legal means,” says Mahesh Boricha. “These people (upper castes) do not like that we are asking for our basic rights and dignity through this law.” ●

Sabah Gurmat is an independent journalist presently based in Mumbai, India. She is interested and curious about issues of law, human rights, culture and gender, and has reported primarily on the same.