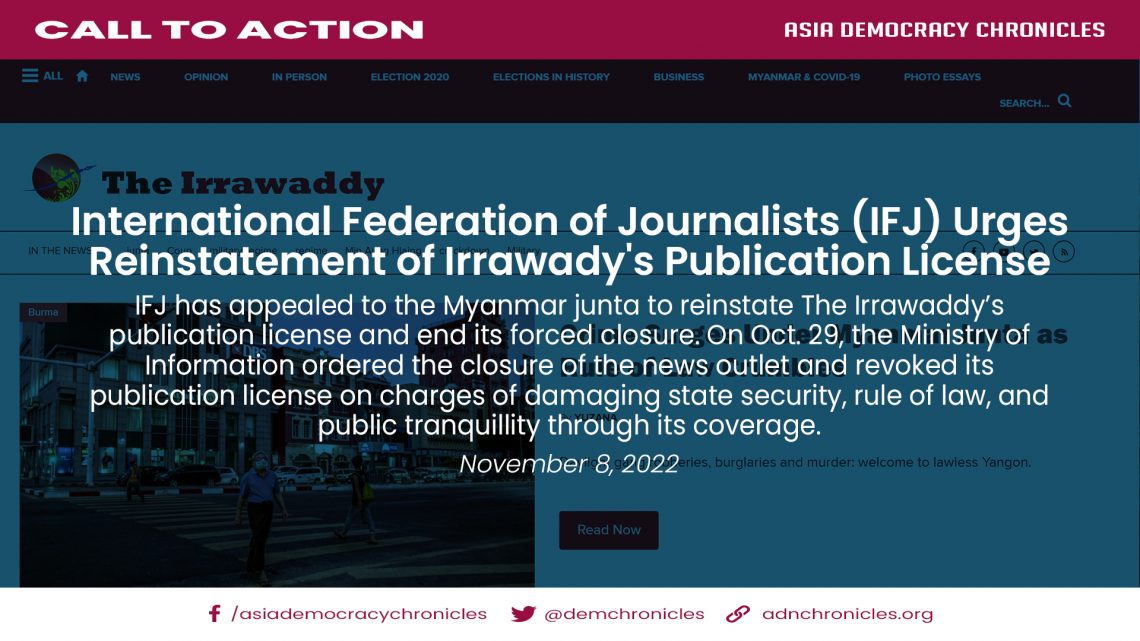 On October 29, the ruling Myanmar junta banned independent online news outlet The Irrawaddy and accused the publisher of violating national security laws. The International Federation of Journalists (IFJ) condemns the actions of the junta, and urges the authorities to reinstate The Irrawaddy’s publication license and end the forced closure of the outlet.

On October 29, the Ministry of Information officially ordered the closure of The Irrawaddy and revoked its publication license. The news outlet has been accused of damaging state security, rule of law, and public tranquility through its coverage.

The junta’s forced closure of The Irrawaddy is the latest in a series of attacks against the news outlet since Myanmar’s military coup in February 2021. On October 14 2022, junta officials announced their intention to take legal action against The Irrawaddy and BBC Burmese journalists for their coverage of a conflict incident in Mon State which left three dead, prompting many to flee into hiding.

The news outlet suffered censorship and legal action by junta forces in 2021, including a lawsuit in March, and two raids on The Irrawaddy’s Yangon office later that year. The junta has previously blocked the outlet’s website in Myanmar, and multiple journalists, media workers and outlet staff, including publisher U Thaung Win and media worker Zaw Zaw have been detained.

The Irrawaddy was founded in Thailand in 1993 and moved into Myanmar in 2012. Following the coup, the news outlet was forced to relocate its editorial staff outside the country.

A new report by the IFJ, ‘The Revolution Will Not Be Broadcast – Myanmar: IFJ Situation Report 2022’, has detailed the lived experiences of Burmese journalists and media workers, bringing to light the junta’s many human and media rights violations since February 2021. The report calls on governments from the Association of Southeast Asian Nations (ASEAN), media organisations and civil society to bring attention to and act against human rights violations in Myanmar, among other recommendations.

The IFJ said: “The military junta must stop their attacks on freedom of the press and let journalists and independent media operate freely. The IFJ reiterates its call for solidarity for journalists and media workers in Myanmar, and urges the authorities reinstate The Irrawaddy’s publication licence and end its forced closure.” #

Retrograde review – extraordinary insider’s view of US withdrawal from Afghanistan