A shop owner calling police on a teen with Down syndrome could destroy the boy’s confidence, a legislator said, calling for more understanding 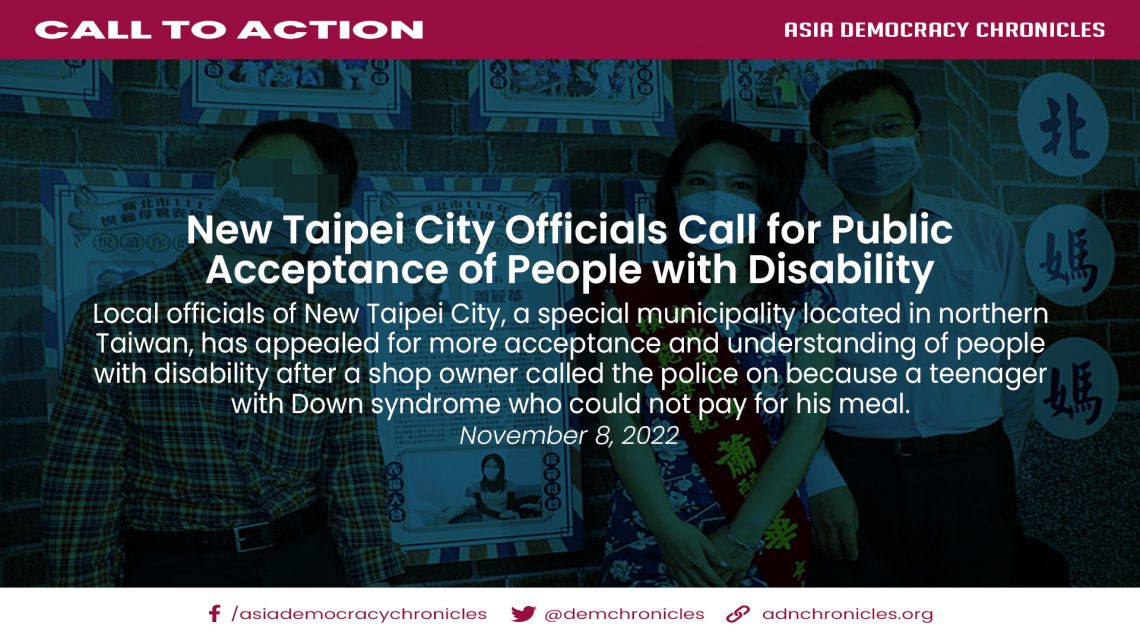 The New Taipei City Government yesterday called for more acceptance and understanding of disabled people, after a shop owner called the police because a teenager with Down syndrome could not pay for his meal.

On Friday, Yonghe District (永和) police were dispatched to a fried food stall after receiving a complaint that a customer would not pay his NT$40 bill.

According to the police report, the teenager said he forgot to bring cash, then did not respond when told he could pay electronically.

Police checked his phone to find that it did not have service, then asked for a contact number for his parents, police said, adding that officers waited for the teen’s father to come and pay before leaving.

The incident went viral on social media, resulting in criticism of the shop owner and a flood of one-star reviews on Google Maps, where the shop is now listed as permanently closed.

The owner issued a statement through a friend saying he has struggled since the incident, which had been misinterpreted.

He asked for time and space to process what had happened.

As people are still wearing masks to protect against COVID-19, the shop owner likely did not realize the teen has Down syndrome and handled the situation inappropriately, Chang said.

The boy’s mother won New Taipei City’s “Model Mother Award” this year for her dedication to caring for her son, Chang said.

She takes him for treatment and has taught him learning and language skills early in life, but is afraid that the incident could pose a setback for him, Chang said.

New Power Party Legislator Claire Wang (王婉諭) on Sunday called for acceptance of people with Down syndrome, citing an incident at a fast-food outlet in 2013.

In that case, the restaurant manager called the police about a person with Down syndrome, saying that there was a “homeless person causing trouble,” she wrote on Facebook.

The resulting public outcry led to a response from the fast-food chain’s top management in Taiwan, she added.

It takes people with Down syndrome a long time and significant effort to develop the skills needed to go out and buy a meal, Wang said, adding that she is afraid the incident could destroy the teenager’s confidence, especially after he posted online saying that he “no longer wants to go buy things.”

“A country’s progress is measured by how it treats its least privileged,” she said.

There are 170,000 people in New Taipei City with disabilities, 33 percent of whom have a mental disability, such as Down syndrome, Chang said.

People with mental disabilities tend to have a slow reaction time or withdraw from situations, Chang said, urging people to be patient and tolerant.

The city regularly organizes events to teach children how to empathize with people different from themselves, she said.

It also encourages accessibility at restaurants, such as installing a ramp at its entrance for wheelchair users and displaying artwork by people with disabilities, Chang added. #

Retrograde review – extraordinary insider’s view of US withdrawal from Afghanistan