IWGIA Calls for the Release of Indigenous Activist in India 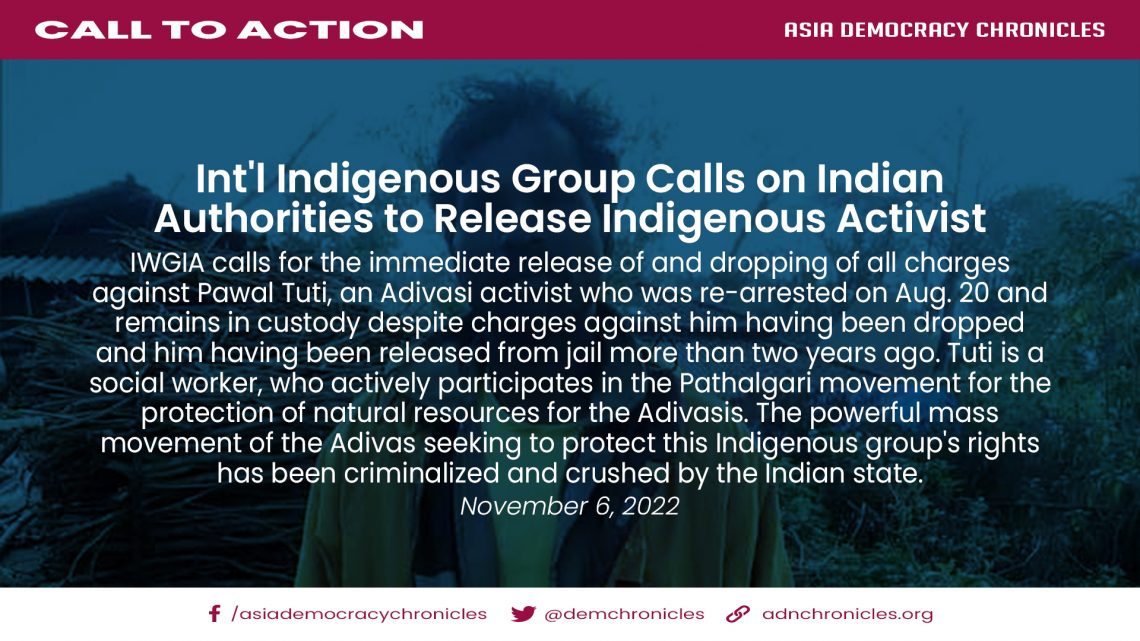 According to IWGIA sources, Pawal Tuti, an Adivasi activist, was re-arrested on 20 August 2022 and remains in custody, despite charges against him being dropped and being released from jail more than two years ago.

IWGIA calls for Pawal Tuti’s immediate safe release and all charges against him to be dropped.

Pawal was first arrested on 24 June 2018 at night in his sleep and was held in jail until February 2020 on five charges, one of which was for sedition, related to an incident on 24 August 2017 where 300 police personnel were held hostage in a village for one night. The next day an agreement was reached between the villagers and the police that no legal action would be taken, but the senior police officers went back on their agreement and filed a case.

Pawal was in the village at the time, but only on the day after the hostage situation and was not involved.

Despite the fact that he wasn’t involved, a warrant for his arrest was issued at the time and he had to live a life in hiding until he was apprehended in 2018.

The other charges are related to his participation in the Pathalgari Movement.

Pawal Tuti, 41, is a resident of Gutwa village in the Khunti district of Jharkhand, whose livelihood is based on agriculture. He is known as a conscious and active Adivasi activist, as well as a social worker in the Pathalgari region, who actively participates in the Pathalgari movement for the protection of land, territory and natural resources of the Adivasis.

While he was in jail from 2018 to 2020 his family suffered a financial crisis as they had to mortgage their agricultural land and use their savings to cover legal fees for his release, which they have been trying to get back since his release.

For more information on the Pathalgari movement read our article here #