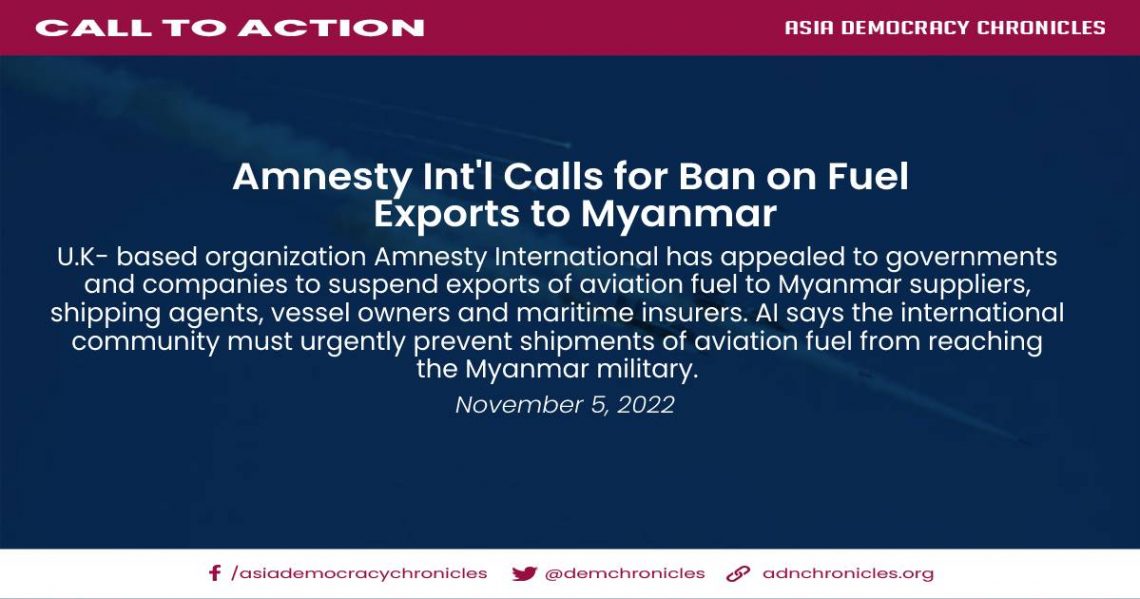 Amnesty International has called for states and companies to suspend exports of aviation fuel to Myanmar.

It says that the international community must urgently prevent shipments of aviation fuel from reaching the Myanmar military.

The comments were made during the 3 November publication of its report investigating companies involved in the supply chain providing aviation fuel to Myanmar, Deadly Cargo: Exposing the Supply Chain that Fuels War Crimes in Myanmar.

The report provides the most detailed look into aviation fuel since the military seized power in the 2021 coup, from the distant port where the fuel originally departed to the unlawful air strikes that killed civilians – and every step in between.

Amnesty International Secretary General Agnès Callamard said: “These air strikes have devastated families, terrorized civilians, killed and maimed victims. But if the planes can’t fuel up, they can’t fly out and wreak havoc. Today [3 November 2022] we are calling on suppliers, shipping agents, vessel owners and maritime insurers to withdraw from a supply chain that is benefiting the Myanmar Air Force.”

She added “There can be no justification for participating in the supply of aviation fuel to a military that has a flagrant contempt for human rights and has been repeatedly accused of committing war crimes, crimes against humanity and other grave human rights violations.”

Amnesty International’s research was carried out in collaboration with Justice For Myanmar and with the support of other civil society organizations such as Burma Campaign UK.

It also features testimony from survivors of air strikes, who shared their harrowing experiences to shed light on the human toll of these unlawful attacks. Victims of air strikes are among the more than 2,300 civilians killed by the military since the coup.

Ka Naw, a 73-year-old man who witnessed an air strike on a populated village in Kayah (Karenni) State, eastern Myanmar, that killed two civilians in February 2022, describes what it was like.

“The sound was so loud. I saw [the] jets going down, bombing, and then going up again,” he said. “They flew very low… The first [pass], they bombed and then they turned around and shot with machine gun.”

Businesses have a responsibility to respect human rights wherever they operate. But Amnesty International’s evidence published today demonstrates that the actions of some companies involved in the supply of aviation fuel to Myanmar also link them to the Myanmar military’s commission of war crimes.

Since 2015, the main foreign business involved in the handling, storage and distribution of aviation fuel in Myanmar has been Puma Energy, which is largely owned by global commodity trading giant, Trafigura. It has operated in Myanmar though its subsidiary Puma Energy Asia Sun (PEAS) and joint venture National Energy Puma Aviation Services (NEPAS).

According to Puma Energy, since February 2021 and until 5 October 2022, it limited its operations to the provision of aviation fuel for civilian purposes. However, the Amnesty report shows otherwise.

Amnesty’s findings indicate that aviation fuel (Jet A-1) enters Myanmar primarily through a terminal in Thilawa port managed by PEAS. Amnesty identified eight separate shipments of aviation fuel that were offloaded at the terminal between February 2021 and mid-September 2022.

The fuel was then stored at the PEAS terminal until transported by tanker truck to NEPAS storage facilities and military air bases across the country.

Puma Energy itself acknowledged to Amnesty that it had “become aware of reports of the military forcibly demanding fuel at selected NEPAS airport facilities. These reported incidents undermined our confidence in NEPAS’s ability to maintain the controls that were put in place” by Puma Energy.

On 26 September, Amnesty presented Puma Energy with evidence from this report. Ten days later, the company announced it was leaving the country and selling its business in Myanmar.

“We acknowledge Puma Energy’s decision to exit from Myanmar, but the announcement of sales to an undisclosed ‘locally-owned private company’ raises entirely new concerns about the need to disengage

responsibly, transparently, and to avoid leaving aviation fuel infrastructure in the hands of the Myanmar military,” said Montse Ferrer, Business and Human Rights Researcher at Amnesty.

“Puma Energy must responsibly withdraw and contribute to the remediation of any harm. This should begin with consultations with representatives of the Myanmar communities that have been affected by unlawful air strikes to find appropriate measures of reparation,” Ferrer said.

But Puma is not alone. Other companies play significant roles in the supply chain of aviation fuel in Myanmar, linking them to the same human rights violations.

Between February 2021 and 17 September 2022, at least seven oil tankers offloaded eight shipments of aviation fuel at the port terminal managed by Puma Energy’s subsidiary PEAS at Thilawa in the commercial capital Yangon.

Documents obtained by Amnesty International show the shipments from Thai Oil and PetroChina’s SPC were intended for use by the Myanmar Air Force.

Representatives of Rosneft, Chevron and Thai Oil told Amnesty International they had received assurances that the shipments would be for civilian purposes only. PetroChina’s SPC did not respond to requests for comment. In response to Amnesty International’s letters, Thai Oil stated it will pause sales of Jet A-1 aviation fuel to Myanmar “until no such concerned issue” exists.

“Any company conducting human rights due diligence should realize that selling aviation fuel to a customer located in a country ruled by a military with an atrocious human rights record at the very least poses high risks,” said Ferrer.

Korean vessel owner Pan Ocean and Norwegian shipping company Wilhelmsen were also found to be involved in a number of aviation fuel shipments. Pan Ocean did not respond to Amnesty. Wilhelmsen said they believed the shipments were for civilian purposes, but also said they will “immediately cease to provide agency services of any kind for vessel or cargo owners discharging Jet A-1 aviation fuel at ports in Myanmar”.

In the course of this research, Amnesty International documented 16 unlawful air attacks that took place between March 2021 and August 2022 in Kayah, Kayin and Chin States as well as in Sagaing Region.

In a concerning new development, in two such strikes Amnesty International documented the Myanmar military’s use of cluster munitions, which are internationally banned as they are inherently indiscriminate.

Amnesty International has been able to directly link four air bases – Hmawbi, Magway, Tada-U and Taungoo – to attacks that amount to war crimes.

The death toll from air strikes is based on what Amnesty International was able to verify through direct evidence, including consistent witness testimony and the names of victims, often corroborated by photographic and video material of attacks.

Based on media reports and separate human rights documentation, there has been a much wider pattern of unlawful air strikes that have killed and injured civilians across Myanmar, meaning the actual death toll is much higher.

In the vast majority of these documented cases, only civilians appear to have been present at the location of the strike at the time of the attack.

Teenage sisters Maria and Caroline, who were around 15 and 12 years old, were killed in a late-night air strike on 17 January 2022 at the Ree Khee Bu IDP in Kayah State, which borders Thailand. Nu Nu, a man in his 50s, was also killed. Kaw Reh, the 50-year-old father of the girls who had been staying in another village that night, arrived the next morning to find their bodies covered in cloth.

“They placed the bodies of my daughters and the man in the church. I just wanted to see the bodies and sit there,” he said, adding that the family’s belongings at the bombing site were either destroyed by shrapnel or burned by other residents because there were “organs and blood everywhere”. His surviving daughter, once outgoing and active, no longer plays with other children.

In July 2022, two Amnesty International researchers visited the site of the attack and surveyed the craters from the bombs and any remaining damage. Given the lack of fighters or other military objectives in the vicinity at the time of the strike, this appears to be a direct attack on civilians and would constitute a war crime.

“The aviation fuel supplied, imported, stored and distributed by a number of companies has been essential to the Myanmar military in carrying out these types of horrifying air strikes. It’s time to break the back of the supply chain of aviation fuel to Myanmar’s Air Force once and for all,” said Ferre