Tiger Seizures Up in Parts of Asia Despite Conservation Efforts

'Unless we want to watch wild tigers wiped out in our lifetime, immediate and time-bound actions must be a priority,' says wildlife trade watchdog TRAFFIC

byRappler
in Statements
Reading Time: 2 mins read
A A
0 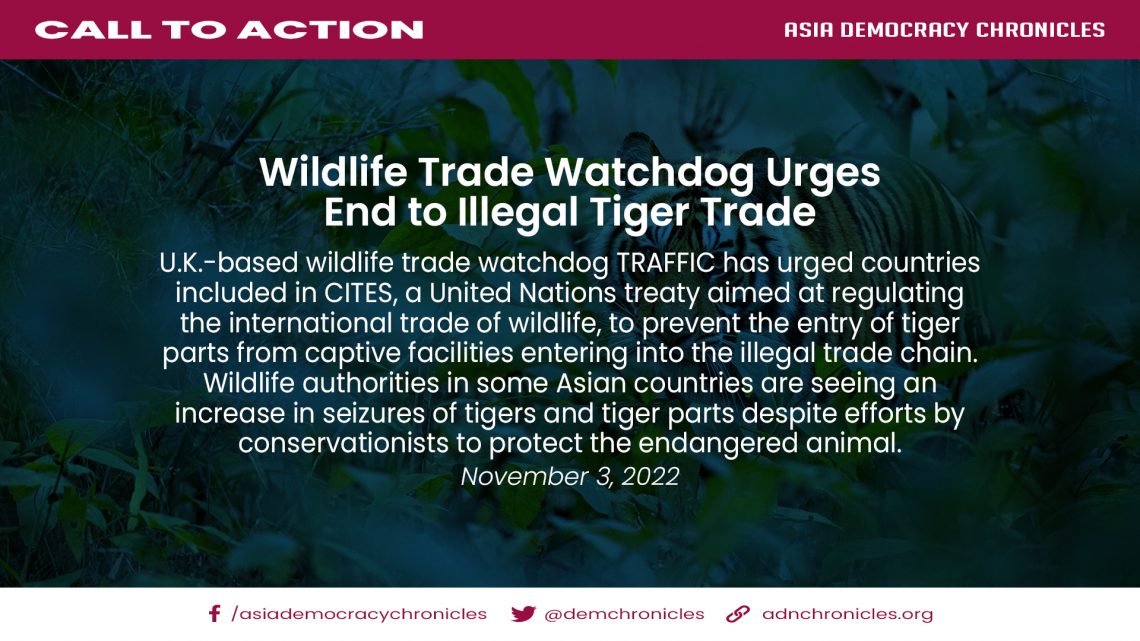 KUALA LUMPUR, Malaysia – Wildlife authorities in some Asian countries are seeing an increase in seizures of tigers and tiger parts despite efforts by conservationists to protect the endangered animal, according to a report by wildlife trade watchdog TRAFFIC.

Tiger numbers globally have been decimated by poaching, trade, and habitat destruction in the past century, though more recent conservation efforts in some countries have stabilized overall population numbers.

Still, populations are now restricted to 13 countries, many in Southeast Asia, which has long been a hot spot for wildlife trafficking, with illicit animal products often sought out for parts or for use in traditional medicine.

According to TRAFFIC’s report, Indonesia, Thailand, and Russia saw significant increases in seizures in the first six months of 2022, compared to the same period in the previous two decades.

Indonesia, home to the critically endangered Sumatran Tiger, saw an equivalent of 18 tigers seized between January and July, compared to 16 in the whole of 2021, TRAFFIC data showed.

Since 2000, an average of 150 tigers, both dead and alive, have been seized per year from 50 countries and territories worldwide – equivalent to a total of around 3,377 tigers, TRAFFIC said.

While the overall number of seizures has declined since 2018, notable increases were seen in China and India, as well as Vietnam, which saw a 185% jump in confiscated tigers compared to the four years prior, the group said.

In Thailand and Vietnam, most of the tigers seized were suspected or confirmed to have been sourced from captive facilities, indicating their role in fueling the illegal trade of tigers and their parts, TRAFFIC said.

“Unless we want to watch wild tigers wiped out in our lifetime, immediate and time-bound actions must be a priority,” said Kanitha Krishnasamy, co-author of the report and director for TRAFFIC in Southeast Asia.

TRAFFIC also identified 675 social media accounts involved in trafficking of tiger and tiger parts in Southeast Asia. About 75% of these were based in Vietnam, the data showed.#