A state of constant digital siege

Authorities in India have made the country top in the list of nations with the most instances of internet shutdowns, and with Kashmir in particular getting cut off from the digital world most often.

hen it comes to government-ordered internet shutdowns, countries with autocratic leaders such as Russia and China usually come to mind. But in the last decade or so, it has been India — supposedly the world’s largest democracy — that has been cutting off its people from the web the most times.

Since 2012, India has shut down the ‘net nearly 700 times, says the Software Freedom Law Center, India (SFLC) based in New Delhi. About 61% of these shutdowns (or 415) have been in Jammu and Kashmir, where they have caused serious disruptions in education and business, as well as in the delivery of accurate news and information. One particular prolonged shutdown in Kashmir also coincided with the deadliest phases of the COVID-19 pandemic in India, putting the lives of those in need of medical help at risk.

According to the global #KeepItOn campaign, of the 182 internet shutdowns it recorded worldwide in 2021, 106 or almost 60% were in India. That makes the country “the worst offender for the fourth consecutive year,” #KeepItOn adds. Myanmar was a far second in 2021, with 15 internet disruptions, while Sudan and Iran shared the third spot with five each.

“Access to the internet is widely recognized as an indispensable enabler of a broad range of human rights,” said the UN High Commissioner for Human Rights in its report submitted last May to the UN General Assembly.  “It is not only essential for freedom of expression, but, as digitalization advances, it is also central to the realization of the rights to education, to freedom of association and assembly, to participate in social, cultural and political life, to health, to an adequate standard of living, to work and to social and economic development, to name just a few.”

“Given the positive obligation of States to promote and facilitate the enjoyment of human rights,” it continued, “States should take all steps necessary to ensure that all individuals have meaningful access to the internet. On the same grounds, States should refrain from interfering with access to the internet and digital communications platforms unless such interference is in full compliance with the requirements of the applicable human rights instruments.”

But Indian authorities apparently believe these are all trumped by “security concerns” or what rules set by the central government say should be cases of public emergencies or threats to public safety. In 2017, India introduced new rules for internet shutdowns under the Indian Telegraph Act of 1885, allowing the home secretary of the union or state governments to order internet shutdowns where it is “necessary” or “unavoidable,” during a “public emergency” or in the “interest of public safety.” 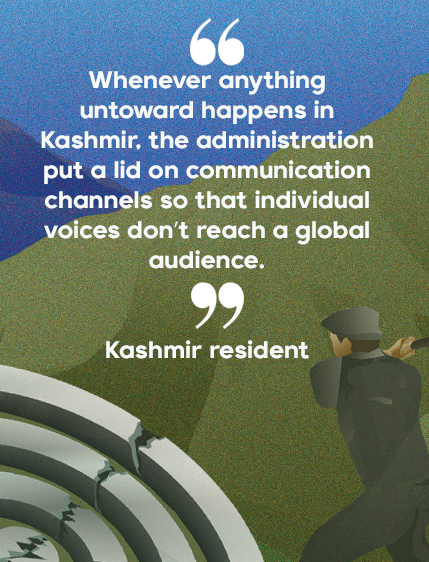 How these terms have been defined by authorities seem to be varied. The virtual private network (VPN) provider Surfshark says that of the 92 cases of internet disruptions that it recorded across India between 2016 and 2021, 71 were triggered by protests, 15 by political turmoil, four were due to elections, and one because of “internet law.” In some states, too, the ‘net has been shut down to avoid cheating in exams.

The case of Kashmir

In Indian-administered Kashmir, officials often justify bans on the internet by saying these curtail the spread of “rumors and misinformation” that could lead to deterioration in law and order and stops the spreading of “anti-national elements,” “provoking people toward agitation,” and “inciting violence.” This is even as the UNHCR May 2022 report said that internet shutdowns often achieve the exact opposite, furthering fear and confusion, and stoking risks of division and conflict.

A Himalayan region under dispute, Kashmir is claimed by neighboring countries India and Pakistan, with each controlling parts of it. A small portion of Kashmir is also under the control of China.

Observers say that, in Kashmir, the internet shutdowns are not about maintaining peace, but are efforts to keep the world uninformed about the valley.

“Whenever anything untoward happens in Kashmir, the administration put a lid on communication channels so that individual voices don’t reach a global audience,” comments a local scholar who declines to be named. “It is a tactic adopted by rulers in today’s world to throttle the voices.”

In a report last August, 2022, Stoke White Investigations, a London-based independent investigative unit, attributed the repeated restrictions to and shutdowns of the internet in Kashmir to fears that criticisms against Indian authorities would be shared beyond Jammu and Kashmir via social media. Said the report: “This is a dismal failure to uphold the rights of Kashmiris, though it is likely a strategy to prevent information regarding India’s operational activities in Kashmir from being ‘uploaded’ and spread on social media.”

Indian authorities first tried taking digital control in Kashmir in June 2010, following a chain of protests in which dozens of civilians were killed. The administration in Kashmir imposed a ban on short messaging services (SMS) in the valley. It was lifted six months later for all postpaid subscribers, but SMS remained suspended for all pre-paid users for around four years.

In 2012, Kashmir had its first internet shutdown on the eve of Republic Day to maintain “law and order.” Four years later, it had another shutdown that would last 133 days.

After Indian paramilitary forces killed top rebel commander Burhan Wani in July 2016, internet and mobile phone services were shut down in the entire valley. Mobile calling was restored on September 20, 2016; internet service for postpaid users was reinstated in November 2016 while pre-paid users had to wait until January 2017.

But Kashmir would have an even longer internet lockdown that ended up lasting 552 days. In the wake of the abrogation of the semi-autonomous status of Kashmir by New Delhi, the administration in Kashmir shut down the internet on August 4, 2019. The ban was implemented a day before Home Affairs Minister Amit Shah presented a bill in the parliament to revoke the semi-autonomy of Kashmir and bifurcated it into two federal union territories now controlled directly by the central government. ‘Net connectivity would not be fully restored in the valley until February 6, 2021. Estimates by Top10VPN, a publication focused on internet privacy, indicate that that particular lockdown alone cost the valley’s economy some US$4.2 billion.

Sometime in February 2020, the government allowed access to select websites. Kashmiris turned to VPNs that bypassed the arbitrary blocking of websites, online content, and social media platforms.  In some areas of the valley, however, residents said that Indian paramilitary forces checked their phones for VPNs; they were subjected to thrashing if such apps were found, they said. The Indian army, however, denied involvement in any such action.

While the internet shutdown in Kashmir that began in August 2019 was going on, India’s top court declared the suspension unlawful and directed the Jammu and Kashmir administration to review the ban.  In its order issued in January 2020, the court also directed the government to publish all orders permitting internet shutdowns.

Last September, the Supreme Court also ordered the Ministry of Electronics and Information Technology (MEITY) to reveal the protocols it uses to decide whether or not to approve internet shutdowns.

Yet while the order was lauded by the petitioner in the case, SLRC, no one really expects the shutdowns to stop anytime soon.

Just last Oct. 4, the internet was shut down in Rajouri district and in other parts of Jammu while Home Affairs Minister Shah was on a visit there. According to authorities, the move was necessary to prevent “misuse by miscreants” that could cause “deterioration in public order.”

A limited internet shutdown in Kashmir last Aug. 7, meantime, was apparently prompted by a bid by authorities to maintain “law and order” during the 8th Muharram procession. Like most ‘net switch-offs in India, it wasn’t announced. One PhD candidate based in Srinagar, Kashmir’s summer capital, says that he was caught off-guard and had to scamper and seek help from a friend with a broadband connection to finish a presentation due the next day.

“I can’t afford a fixed-line broadband connection,” says the PhD student. “I use mobile internet to work on my research project.”

Another PhD student in Kashmir, who already holds a media studies degree, says that the internet blockades do not only hamper his work, but also prevent him from staying connected with friends and relatives and accessing information through social-networking sites.

That has a psychological effect, he says. “When you remain disconnected from your acquaintances, sometimes even for a longer time, you feel isolated, which impacts your mental health. Even when the internet is restored, it takes you a lot of time to resume and concentrate on your work again,” he explains.

Not knowing when the internet will stop working has also made planning for the future somewhat complicated. The same student says that back in 2019, he was offered an opportunity to join a respected international organization as a fellow. He was asked to submit documents and other details on a particular date. But that was the time when Kashmir was having its second prolonged internet shutdown.

“I got a chance to access the internet after the deadline had passed,” he says. “I contacted the organization but they said that it was too late.”

A local businessman also says that he has not yet cleared the debts he incurred when he started his small business venture in 2019 in the Anantnag district of South Kashmir. “I had started an online clothing store,” he recalls. “I had to shut it down after the administration enforced the prolonged ban on the internet.”

Says the businessman: “It is very difficult to start a business in Kashmir that depends on the internet.” ●

Nepal: Next Parliament Should Prioritize Justice for Conflict Victims