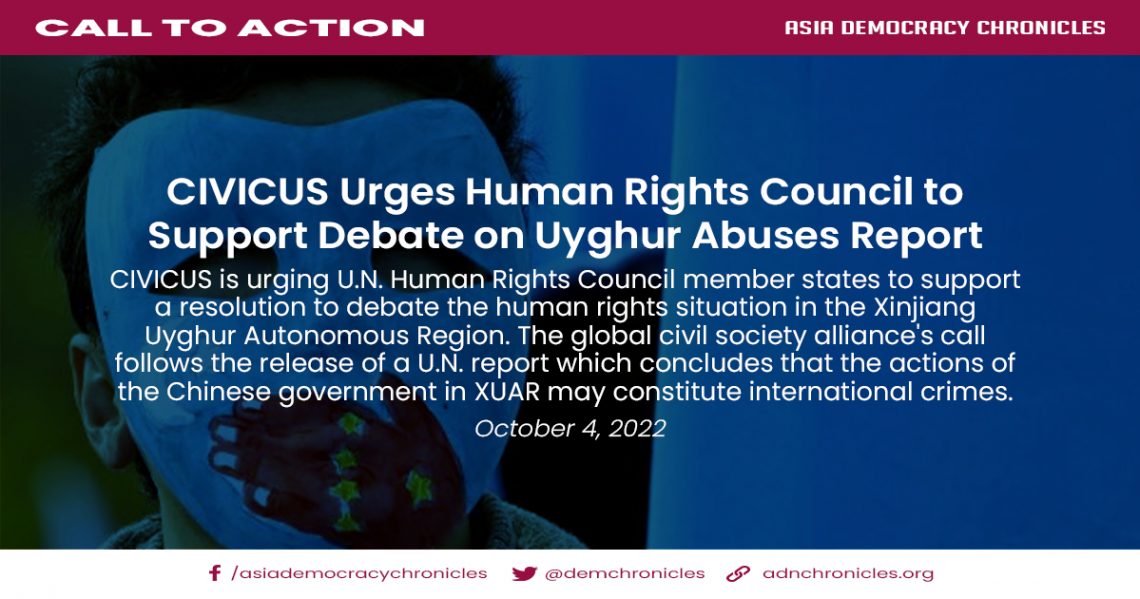 Global civil society alliance, CIVICUS is urging UN Human Rights Council member states to do the right thing by voting in support of a resolution to debate the human rights situation in the Xinjiang Uyghur Autonomous Region (XUAR). The vote is expected to take place this week.

The resolution follows the release of a major UN report which affirms that the rights of Xinjiang’s Uyghur Muslim population are being violated through an industrial-level programme of mass incarceration, systemic torture and sexual violence. The report attracted intense criticism from the Chinese government before it was released on 31 August 2022, minutes before the High Commissioner for Human Rights, Michelle Bachelet ended her term.

The report concludes that the actions of the Chinese government in XUAR including arbitrary detention, cultural persecution and forced labour may constitute international crimes, in particular crimes against humanity. Recommendations include the taking of prompt steps to release all individuals arbitrarily imprisoned in XUAR, a full legal review of national security and counter-terrorism policies, and an official investigation into allegations of human rights violations in camps and detention facilities.

“The UN report affirms testimonies of victims belonging to the Uyghur community who have endured extreme forms of oppression. Human rights researchers and civil society groups have for years documented abuses and sounded the alarm to the international community about the situation in Xinjiang,” said Mandeep Tiwana, CIVICUS Chief Programmes Officer. “Yet the Chinese state is going to extraordinary lengths to suppress the findings and cover up its actions.”

In June 2020, 50 UN Special Rapporteurs and human rights experts issued a joint statement, that catalogued concerns over the treatment of ethnic minorities in XUAR and Tibet, alleging excessive force against protesters, as well as in Hong Kong, and reports of retaliation against people voicing their concerns publicly over COVID-19 pandemic policies.  The experts urged the Human Rights Council to convene a special session on China; consider the creation of a Special Procedures mandate; and appoint a UN Special Envoy or a panel of experts to closely monitor, analyse and report annually on the human rights situation in China.

“Elected member states of the Human Rights Council have responsibility to uphold the highest standards in the protection and promotion of human rights. A vote to debate the report’s findings would be a significant step towards transparency and accountability. We hope they will do the right thing,” said Tiwana.

China is currently ranked in the worst ‘closed’ category on the CIVICUS Monitor, a participatory research platform that measures fundamental civic freedoms around the world. #