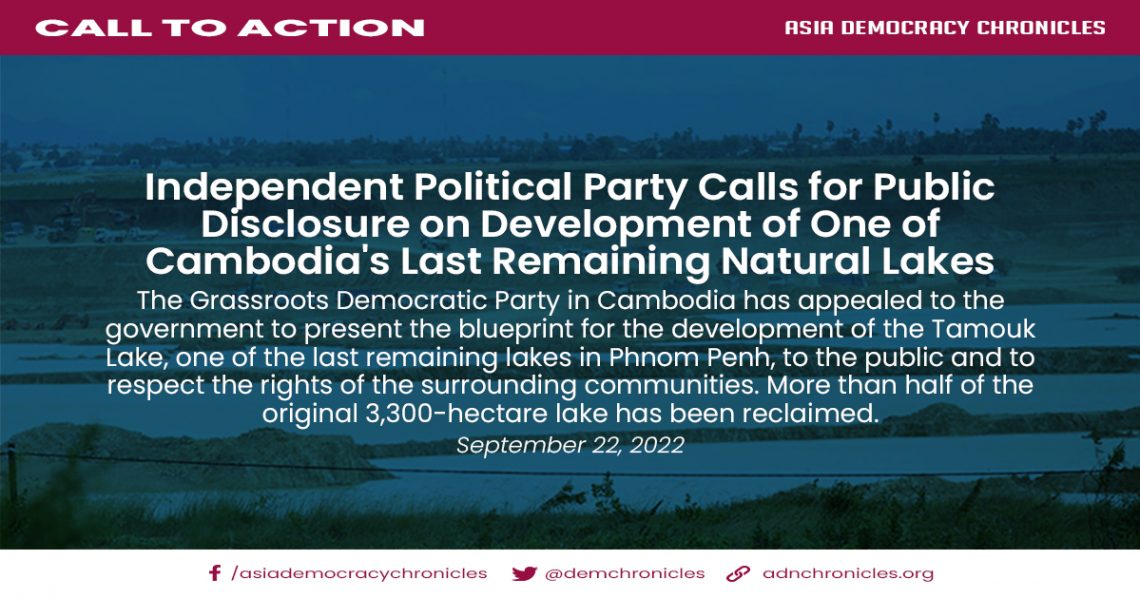 The Grassroots Democratic Party (GDP) has urged the relevant ministries and institutions, especially the government, to present the blueprint for the development of Tamouk Lake to the public and to respect the rights of those living along it.

The call came after the party on Monday inspected the condition of this last large natural lake in Phnom Penh.

GDP Secretary-General Sam Inn told Khmer Times yesterday that the party was most concerned about the future of Tamouk Lake, which will suffer the same fate as Boeung Kak lake which became a landfill.

“We demand that the government shows the master plan to the public, especially the people in Phnom Penh, because Tamouk Lake is public property,” he said.

“We also propose that the rights of the people around Tamouk Lake be protected because some of them have lived there for 20 years and some for more than 20 years.

On Monday, GDP confirmed on its Facebook page that, upon closer inspection, it found that more than half of the original 3,300-hectare lake had been reclaimed.

Sok Touch, president of the Royal Academy of Cambodia, has also previously criticised the reclamation of Tamouk Lake and gave the example of the Angkorian era when waterways were preserved.

An STT report on February 10 said that as of December 2021, more than 2,000 hectares of Tamouk Lake had been provided by the government to companies and institutions for development.

According to the organisation, about 300 families comprising 1,000 people live along the lake, most of whom are engaged in fishing.

In 2016, the government issued a sub-decree to designate Tamouk Lake, north of Phnom Penh, as state public property, covering a total area of 3,239 hectares. #