NGOs Call on the Government to Speed Up Alcohol Law 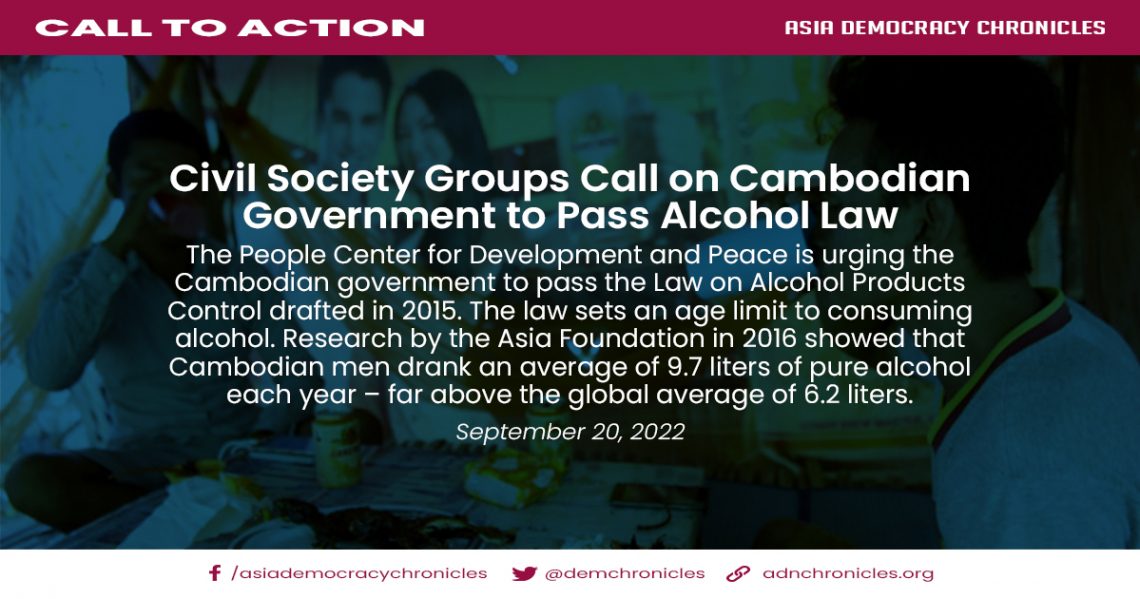 PHNOM PENH – Seven years after the government delayed the adoption of the Alcohol Product Control Law, civil society groups keep urging the government to set up an age limit under which consuming alcohol would be prohibited.

The Law on Alcohol Products Control was first drafted in 2015 and was divided into 11 chapters containing 39 articles. While it has been forgotten for years, a meeting held on May 4, 2022, between the Vice-President of the US-ASEAN Business Council, Michael W. Michalak, and the Minister of Public Works and Transport, Sun Chanthol, put the spotlight back on it.

Officials from the ministries of Transport, Education, and Health committed to joining forces to pass the law as soon as possible, setting an alcohol drinking age of 18 years old.

But signs of progress are too slow, say civil society groups and youth.

Yong Kimeng, the executive director of People Center for Development and Peace (PDP-Center), a local NGO dedicated to addressing socio-economic problems, said his organization is urging the government to pass the law, as it was drafted in 2015.

“Passing the law as soon as possible is a matter of public health for young people, children, and women who fall into violence and alcoholism,” he said.

If Cambodia wants to improve social development in both the cities and the countryside, young people shouldn’t be allowed to drink alcohol as it is affecting their physical and mental health, added Kimeng.

“The government lacks the political will to admit that alcohol is a dangerous problem,” he said.

According to PDP-Center’s director, the adoption of the law has been delayed to please alcohol companies, whose benefits could decrease if sensibilization of the dangers of alcohol is gaining attention.

“As long as the government doesn’t see alcohol as a dangerous product, no change can be expected,” said Kimeng.

Pa Chanroeun, the president of the Cambodian Institute for Democracy, shares Kimeng’s views.

“Alcohol consumption undermines social morality and encourages domestic violence and traffic accidents,” he said. “We [NGOs] call for the government to speed up the adoption of the Alcohol Product Control Law as it is an important step for the Cambodian society.”

Chanroeun believes that government officials are capable of drafting and passing the law, but stresses that the lack of political will is the reason why the text has been delayed for so long.

While national elections will take place next year, Chanroeun expects each political party to include its views on the law and on the consumption of alcohol in its political program. “It can be a good way to get support from voters,” he said.

According to Asia Foundation research in 2016, Cambodian men drank an average of 9.7 liters of pure alcohol each year – far above the global average of 6.2 liters.

But the perception of consuming alcohol is changing, especially among the urban youth.

Mom Voleak, a third-year student of the National University of Management said that drinking alcohol is not good for young people, as they should dedicate their time to education rather than drinking.

“Among the youth, many people drink because they think it would make them happy and look cool, as in advertisements, TV shows or music videos,” he said. “It would be great if Cambodia had a law to control and punish young consumers.”

Thay Thanit, a 24-year-old international relations student at Pannasastra University said that accelerating the implementation of the draft law on the control of alcohol products is a necessary step to take care of the youth and ensure nation-building.

She claimed that if this law is not fully enforced, it may increase the alcohol consumption of children, whose development would be put at risk.

“I think that this law has to be a priority because alcohol in Cambodia already is already widely consumed. If we don’t restrict the age of consumers, it can only go in the wrong direction,” she said.

Cambodia is one of the few countries in the world with no minimum age to drink alcohol. The 2016 research led by the Asia Foundation also stressed that the availability of cheap liquor and the lack of restrictions on advertising are part of the reasons explaining Cambodia’s high rate of alcohol use. #