Reporters Without Borders (RSF) calls for the immediate release of Htet Htet Khine, a Burmese freelance journalist and former BBC Media Action presenter who was sentenced to three years in prison with hard labour 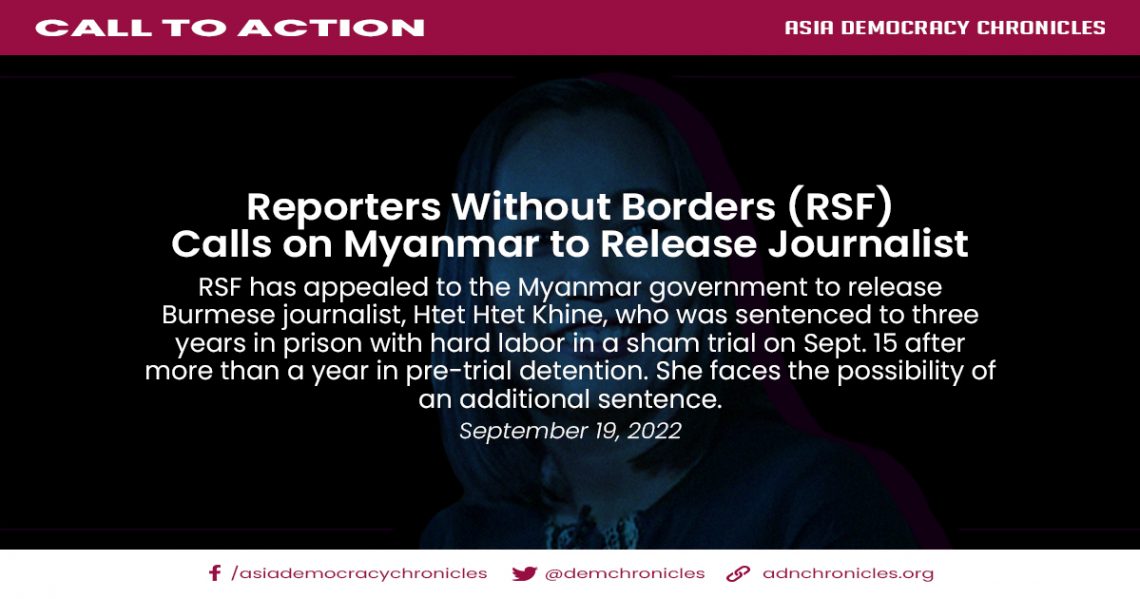 Reporters Without Borders (RSF) calls for the immediate release of Htet Htet Khine, a Burmese freelance journalist and former BBC Media Action presenter who was sentenced to three years in prison with hard labour in a sham trial on 15 September after more than a year in pre-trial detention. She faces the possibility of an additional sentence.

“It is unacceptable that a journalist is imprisoned just for doing her job to freely inform her fellow citizens,” RSF’s Asia-Pacific desk said. “We call on Tom Andrews, the UN Special Rapporteur on the situation of human rights in Myanmar, to take action to end the spate of criminal convictions to which Burmese journalists are being subjected at an astonishing rate.”

A court in Yangon, Myanmar’s biggest city, convicted Htet Htet Khine under Section 505 (a) of the Myanmar penal code on a charge of inciting hatred and violence against the armed forces in her reporting.

She has been held in Yangon’s notorious Insein prison ever since her arrest on 15 August 2021.  After the trial, her lawyer praised her courage and pointed out that no evidence had been produced to support the charge. The head of programming at BBC Media Action, for which she used to work, said he was “concerned for her safety and well-being.”

Htet Htet Khine was arrested with Sithu Aung Myint, a journalist with whom she had spent several weeks in hiding in a Yangon apartment. A reporter for Frontier Myanmar, an independent magazine, and for Voice of America radio, he is still awaiting trial on charges of “incitement” and “sedition” for articles critical of Myanmar’s military. The charges carry a possible combined sentence of 23 years in prison. In April, his lawyer said his health was deteriorating and that the prison authorities were denying him medical attention.

Htet Htet Khine is meanwhile facing the possibility of an additional three-year prison sentence under Section 17-1 of the Unlawful Associations Act for working for Federal FM, a radio station banned by Myanmar’s military government, and for “harbouring” a journalist wanted by the authorities.

Htet Htet Khine is from central Myanmar and has been a journalist since 2010. She worked for BBC Media Action for many years and, from 2016 to 2020, presented “Khan Sar Kyi” (Feel It), a BBC Media Action TV programme for viewers in Myanmar that focused on the conflicts in Burmese society with the aim helping to resolve them.

Ever since its independence in 1948, Myanmar has been in a state of permanent civil war that is closely linked to the country’s ethnic diversity. “Khan Sar Kyi” repeatedly went to the border regions where most of the ethnic conflicts are located and interviewed those who have to live with it on a day-to-day basis.

“Freedom is never given – it is won,” was a comment often heard from Htet Htet Khine, who was convinced that, by helping to draw attention to the horror of these conflicts, her reporting was contributing to the cause of peace. Seeking to make warlords of every kind see the impact of the wars they were waging, she often accompanied army generals to camps for internally displaced persons and the leaders of armed ethnic groups to see farmers’ devastated lands.

At least 110 journalists have been arrested in Myanmar since the military retook power in a coup in February 2021, and 66 are currently imprisoned. Several of the latter have been tried and convicted in recent months. They include Maung Maung Myo, a freelancer who was sentenced to six years in prison on a terrorism charge in August, and Nyein Nyein Aye, a woman reporter who, like Htet Htet Khine, was sentenced to three years in prison with hard labour in July. #