Malaysia: Government Accused of Political Interference in the Media

Concerns for press freedom in Malaysia have been raised after media advocacy group Gerakan Media Merdeka (Geramm) received reports of alleged political interference in the appointment of a new group editor of english-language newspaper New Straits Times (NST). The International Federation of Journalists (IFJ) condemns any attempt to infringe on the independence of media outlets and calls on the Malaysian government to respect press freedom in Malaysia. 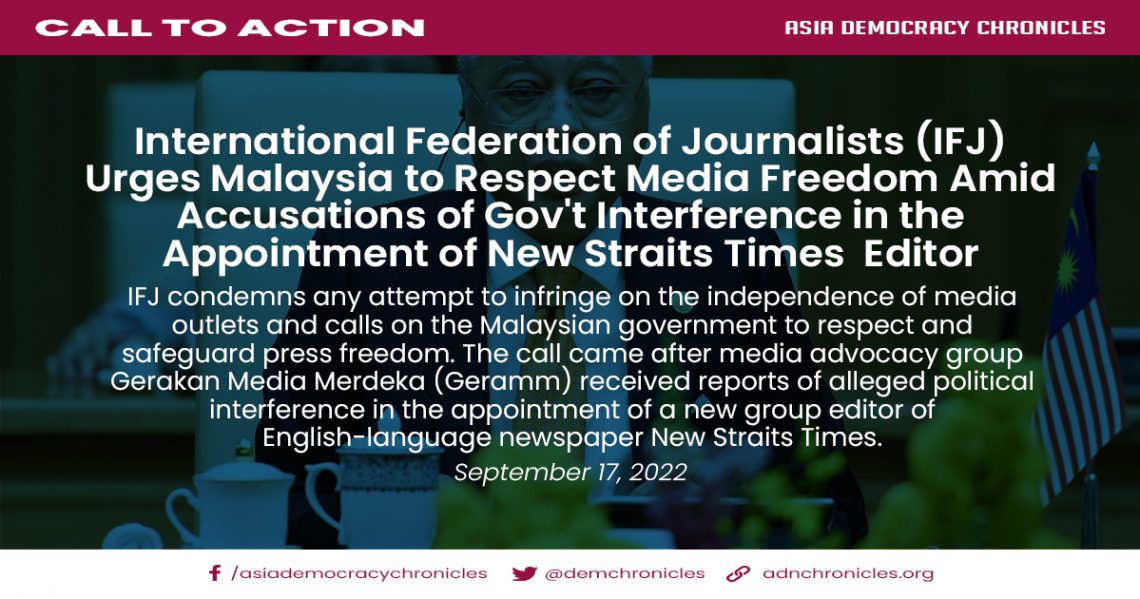 On 13 September, the NST, a subsidiary of the Media Prima group,announced it had appointed Farrah Naz Karim as the newspaper’s new group editor, effective from September 15, replacing Ahmad Lokman Mansor.

Geramm also expressed concern over the fate of the outgoing editor Mansor and called on the Malaysian government and the NST to support the efforts of journalists and media workers in protecting the independence of news outlets in Malaysia.

Media Prima group chairperson, Syed Hussian Aljunid, defended the appointment of Karim, stating that the decision was based on her extensive experience in newsroom operations and represented part of an effort to boost the paper’s visibility and readership.

“Media Prima is neither owned nor does it report to any political party, whether in the manner suggested in recent news reports or otherwise,” Aljunid said in a statement.

Prime MinisterDatuk Seri Ismail Sabri Yaakob declined to comment directly on the matter, but told reporters on August 15 that the media are free to report so long as “…the reporting is accurate and credible.”

Media unions, advocacy groups and journalists have expressed concern at the allegations’ future implications for the media and democracy in Malaysia.

The IFJ said: “The alleged government interference in the appointment of a new editor at the New Straits Times reflects a deteriorating situation for the independence of the media in Malaysia. The IFJ condemns any attempt to exert political influence over the media and calls on the Malaysian government to safeguard press freedom.” #