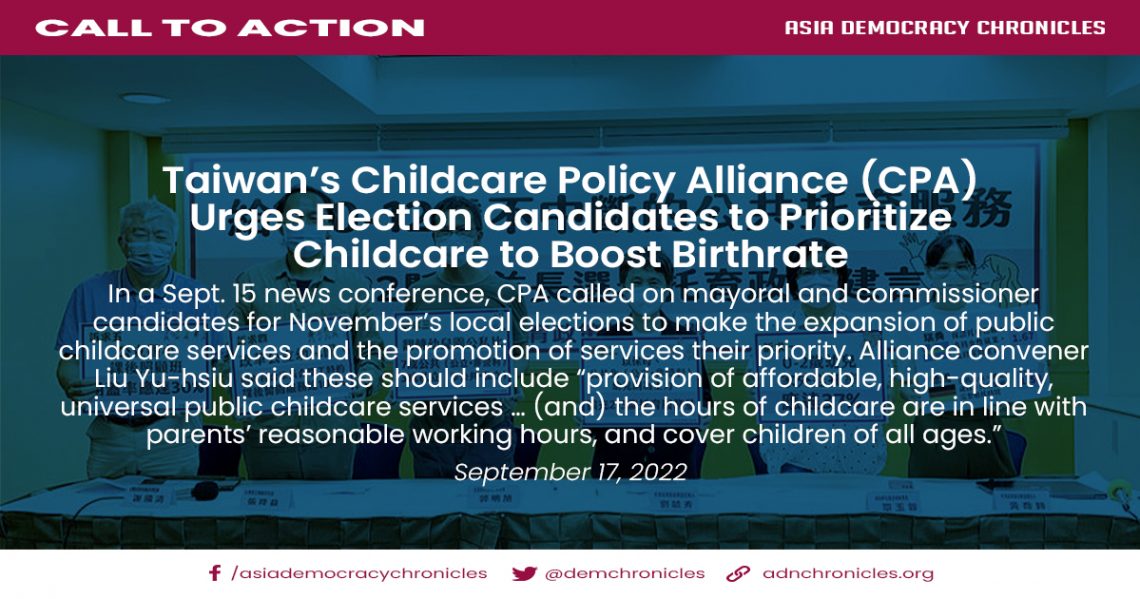 The government’s use of preschool tuition subsidies and quasi-public kindergartens is similar to South Korea’s model, but has not raised Taiwan’s birthrate, the Childcare Policy Alliance said on Thursday, adding that public childcare services should be expanded.

The alliance urged mayoral and commissioner candidates for November’s local elections to make the expansion of public childcare services and the promotion of services that accord with the working hours of parents a part of their platform, saying this was necessary to increase the birthrate.

There should be sufficient services available to accommodate 37 percent of infants aged two or younger, with the main focus on certified nannies, and public and non-profit kindergartens, it said.

Childcare services for children aged two to three should also be expanded, with a 7:3 ratio of public schools to private, it said, adding that kindergartens should have after-class programs to accommodate the needs of working parents.

“The only effective way to increase the birthrate is for the government to provide affordable, high-quality, universal public childcare services,” alliance convener Liu Yu-hsiu (劉毓秀) said, citing a 2019 UN report. “It must also ensure that the hours of childcare are in line with parents’ reasonable working hours, and cover children of all ages.”

Liu said Germany had raised its total fertility rate (the average number of children born to a woman over her lifetime) from 1.24 to 1.57, after following Sweden’s example and improving daycare services.

Meanwhile, South Korea’s birthrate has been declining, despite the country offering free daycare due to poor quality and unsafe daycare conditions, low parental satisfaction with daycare and additional expenditure for tutoring services, she said.

The ratio of public to private kindergartens, currently at 3:7, must be reversed, Alliance of Educare Trade Unions director Kuo Ming-hsu (郭明旭) said, adding that Taipei has the most public kindergartens at 40 percent, while Tainan has only 23 percent.

Quasi-public kindergartens have been promoted for just under four years, and they often overcharge tuition, have been reported for child abuse and appoint unqualified childcare personnel, he said.

Some public kindergartens finish classes at 4pm, and have summer and winter vacations, which do not meet the needs of families with two working parents, Taiwan Labor Front researcher Chang Feng-yi (張烽益) said.

Public kindergartens are under the authority of the local government, and whether after-school services are offered is up to their discretion, he said.

Candidates should make the issue a priority to help support parents, he added. #

60% of people with foreign roots questioned by Japanese police: survey

60% of people with foreign roots questioned by Japanese police: survey

Some edtech firms in China rebound after crackdown