byKhmer Times
in Statements
Reading Time: 3 mins read
A A
0 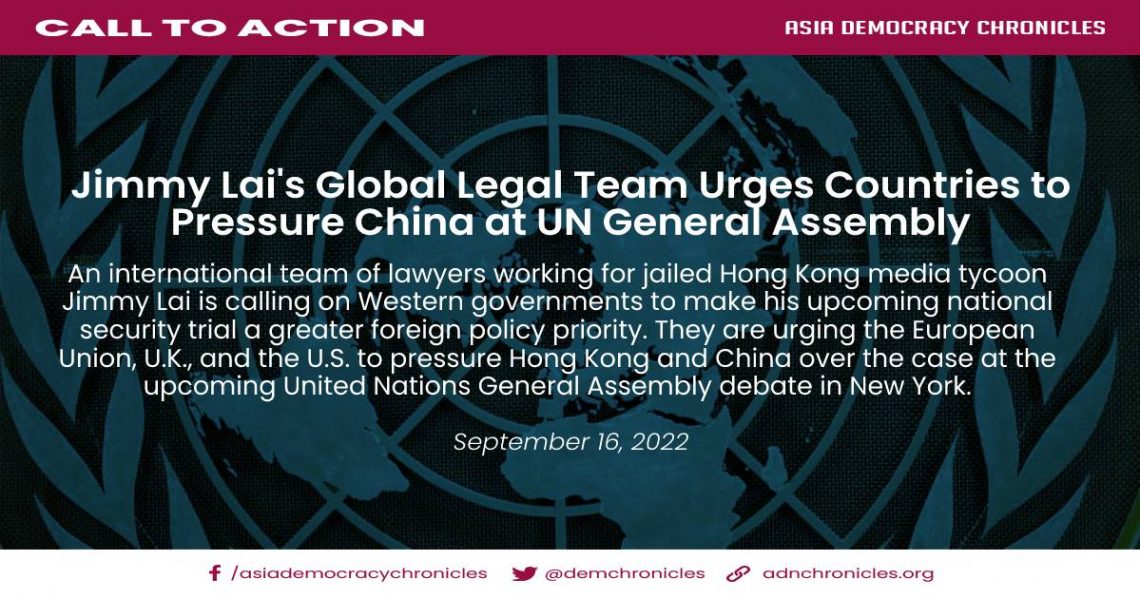 Lawyers for Lai, whose pro-democracy newspaper Apple Daily was closed last year under a pressure campaign by security police, said they wanted the European Union, UK and US to pressure Hong Kong and China over the case.

The call comes as world leaders descend on New York this month for the UN General Assembly debate.

“This is a key time for the US to ensure that this case is raised as a very high priority bilaterally in engagement with Hong Kong and China,” Ms Caoilfhionn Gallagher, a member of Lai’s international team, said in an interview Wednesday in Washington. She said the group was distinct from the lawyers who’ll argue his case in a Hong Kong court.

The global team’s goal is to get foreign governments to convince Chinese authorities to drop the charges against Lai, said Ms Gallagher, who has previously acted on behalf of journalist and Nobel Laureate Maria Ressa.

Conversations with various international lawmakers already suggested there would be a strong policy response toward China if Lai was convicted, his lawyers said, without providing details.

So far, all four people tried under the Beijing-drafted security law have been found guilty.

Lai, 74, and six former Apple Daily employees face sentences as long as life in prison if convicted of colluding with foreign forces under the security law, which Beijing imposed on Hong Kong in June 2020, in the wake of the previous year’s mass anti-government protests.

Prosecutors allege that Lai and the other defendants sought international sanctions against Hong Kong and China through his pro-democracy newspaper.

Lai has been denied bail while awaiting trial and his case will be heard by three national security judges handpicked by the city’s leader.

Lai’s high-profile case has fanned growing concerns about press freedom in the city.

Several pro-democracy media outlets closed in the wake of the security law, which has been used to jail much of the city’s political opposition. Hong Kong fell 68 places year on year to 148th place in Reporters Without Borders’s most recent World Press Freedom Index.

Hong Kong’s most senior officials have said their moves against Apple Daily didn’t undermine press freedom and the paper was not engaging in “normal journalistic work.”

The Chinese government’s Liaison Office said “freedom of the press is not a ‘shield’ for illegal activities.”

The US, UK and other Western nations have condemned the closure of Apple Daily and the security law, with US President Joe Biden saying Beijing was using it to “suppress independent media and silence dissenting views.”

US Secretary of State Antony Blinken previously called for Lai’s release, after a separate conviction related to the activist’s participation in a pro-democracy rally.

“We would expect there to be a robust policy response from the US and other states should this abusive treatment of Mr Lai continue,” said Mr Jonathan Price, another member of Lai’s international legal team.

The now-closed Apple Daily newspaper, which Lai founded, was one of the city’s most popular media outlets and championed greater freedoms in the Asian financial centre before it was targeted by authorities who arrested senior editors, froze its bank accounts and effectively forced it to close in 2021.

Ms Gallagher said the downfall of Apple Daily, which was operated by Lai’s publicly-listed Next Digital Ltd, should serve as a warning to other multinational firms in the financial hub.

“Companies operating in Hong Kong, regardless of what they do, need to look at this case very closely,” she said, adding that the message was: “toe the Beijing line or you’ll be next.” “What’s happened with Apple Daily is essentially the theft of a US$150 million (S$210.87 million) company,” she added, “with impunity and on very short notice.” BLOOMBERG

US exploring ways to expand security cooperation with Bangladesh