Is Asia’s democracy in decline?

Authoritarian governments gain more power and militarist groups gain ground in countries that have only recently become democratic, and Asia is a microcosm of the global decline of democracy.

his year remains a critical juncture for democracy in Asia as it reels from the major events that struck democracy in 2021: the Taliban takeover in Afghanistan, the coup in Myanmar, and increasing crackdowns in India.

Several studies have pointed out that the number of democracies in the world is decreasing — from 42 in 2012 to only 34 in 2021. Experts have called this “democratic backsliding,” and it has become prominent in Asia.

Today over four billion people across the region live under authoritarian rule or electoral autocracy, compared with less than three billion in 2012. Much of that increase in the population is due to the fact that India — which has a population of more than 1.4 billion — has been downgraded from being the world’s largest democracy into an electoral autocracy.

U.S. political scientist Nancy Bermeo defines democratic backsliding as “the state-led debilitation or elimination of political institutions sustaining an electoral democracy.” In her widely cited paper on the phenomenon, she points out that the ways in which democratic backsliding happens today are vastly different from how it was in the past. With a human rights-based framework embedded in many constitutions and popularized by the United Nations, many governments today are turning autocratic under the guise of democratic processes. 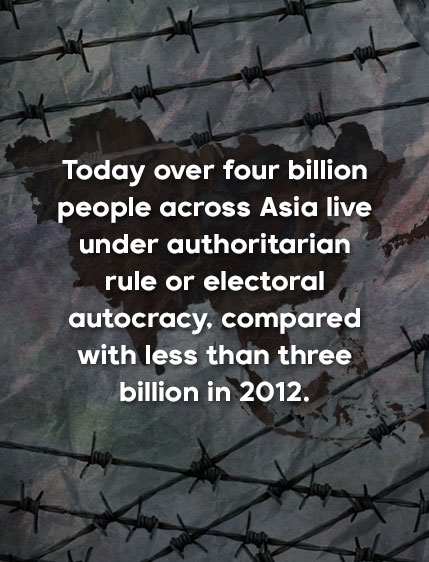 A common thread, however, is the effort of militarist and authoritarian governments to make themselves more palatable and more legitimized.

Promissory coups, for example, are characterized by promises of democratic elections or are premised on elections after the takeover. This was what the Tatmadaw or military leaders proclaimed in Myanmar when they wrested control of the government there in February 2021. But a year has passed and fair and democratic elections are nowhere in sight for the Southeast Asian nation. Instead, a civil war with the country’s ethnic armies has resumed, even as the junta’s increasingly violent crackdown on activists has continued.

In Mongolia, a long-standing constitutional crisis since 2019 has destabilized its democratic processes and consolidated power toward the China-backed Mongolian People’s Party (MPP). As the country sets its gears toward yet another constitutional amendment this year, critics worry that proposals will tend toward less checks and balances to the ruling party-led executive.
Allegations of electoral fraud also resurfaced in the Philippines and India this year as both elected autocratic yet widely popular governments. Media control, a key component of electoral manipulation, has also tightened in these autocratizing countries.

The media and journalists in the region are fighting an uphill struggle as persecution grows. Although they have functioning democracies on paper, India, the Philippines, and Sri Lanka are ranked even lower this year in the most recent assessment of the global media rights group Reporters Without Borders (RSF) in terms of how strictly their governments uphold press freedom.

In the meantime, Beijing’s media influence in the region continues to grow. A recent report from Freedom House identifies Taiwan, Philippines, India, Sri Lanka, Indonesia and Malaysia as the main targets of China’s media infiltration and operations.

Graph 3. The information in this graph is based on V-Dem Institute’s Episodes of Regime Transformation which measures the subtle changes in democratic institutions within countries, encompassing changes in policies, laws, and culture affecting democracy.
(Source: V-Dem Institute)

The trend of weakening democratic institutions has also continued in Asia. In Thailand, a new law on civil-society organizations (CSOs) threatens to shrink further the meager democratic space available to its citizens. This, as the crackdown on activists speaking out against the monarchy continues.

Cambodia has declined in rank as well in numerous reports such as the Democracy Report of the Varieties of Democracy (V-Dem) and the Democracy Index of the Economist Intelligence (EIU) for its crackdown on activists and increasingly draconian lockdowns in the past two years. Now sitting at a de facto one-party rule since 2018, the Hun Sen regime continues persecuting its opposition and critics.  In fact, the latest EIU report has degraded scores for over 10 countries since 2019 in Asia including Sri Lanka, Thailand, and Nepal, as well as the Chinese Special Administrative Region of Hong Kong.

Graph 4. State-sponsored violence is based on events that directly inflict violence against civilians, perpetrated by, and associated with state actors.
(Source: ACLED Data. Last accessed on Sept. 12, 2022)

State-sponsored violence has returned to its pre-pandemic levels in the region. Political intimidation, harassment of activists, and extrajudicial killings saw a notable rise in 2021, especially in Myanmar, the Philippines, and Afghanistan. Elevated levels of repression have also been seen in India, Pakistan, and China.

A damning report released by the UN Human Rights Council recently recognized the widespread Uyghur suppression in Northeast China. From torture and forced sterilization to internment and hamletting, the report describes these State-sponsored violations as “possible crimes against humanity.”

Violations against civilian rights in India’s Jammu and Kashmir also came to light in 2022. Amnesty’s report highlights rampant human-rights violations and press repression exacerbated by a dysfunctional justice system in the region, part of which is claimed by both India and Pakistan.

In the Philippines, the vicious drug war and crackdown on the media and civil society continued under Rodrigo Duterte’s watch until the end of his tenure in June 2022.  Some observers predict that the late dictator Ferdinand Marcos’s son and namesake, who was elected president last May, is poised to continue the bloody policies of his predecessor.

Yet many people are not just sitting down and enduring all these. Protests remain a bastion of democratic participation in the region. The massive spring of protests that characterized 2019 — described by many as a year of discontent — is back in full swing, at least in frequency. While pandemic lockdowns and restrictions curtailed peaceful assemblies in 2020 and 2021, large protest movements have resumed since the end of 2021.

In Indonesia, ethnic Papuans staged massive protests, demanding a referendum on Papuan independence after the government unveiled its plans to create additional administrative provinces on the island and revise the Papua Special Autonomy Law.

There has been a resurgence of anti-authoritarian demonstrations in Thailand, Cambodia, and Kashmir, all of which had seen declines since the pandemic. The ouster movement in Thailand is in fact among the three that dominated headlines this year, the other two being in Sri Lanka and South Korea.

Even triumphant efforts to oust abusive leaders, however, have not really resulted in total regime change. In Malaysia, the United Malays National Organization has made a stunning political comeback despite its former head, ex-Prime Minister Najib Razak, now serving a 12-year jail sentence for graft. Similarly, the “Gota Go Home” protests in Sri Lanka managed to oust the Prime Minister and the President Rajapaksa siblings, but the new government remains in the hands of their China-backed loyalists.

As expected, too, authoritarian regimes tend to violently disperse these protests against ruling elites — and some have proved far too successful in their clampdowns. In Bangladesh, a recent visit from the UN High Commissioner for Human Rights shed light on the de facto policy of zero tolerance policies for protesters, torture against activists of the country’s present government. In Hong Kong, protesters have yet to return to the streets after Beijing’s concerted legal measures to quash pro-democracy protest movements in the last two years.

As the world continues to grapple with the rising cost of living and the enduring pandemic, the peoples of Asia will also be having a constant tug-and-pull over democratic rights. ●

We want all to join the polls

We want all to join the polls

China looks to increase penalties under its cybersecurity law