Post-authoritarian peas in a pod

New Philippine President Ferdinand Marcos Jr.’s first official foreign visit was to Indonesia — which was apt considering the political commonalities between his country and its neighbor.

ust a little more than two months after his inauguration, Philippine President Ferdinand “Bongbong” Marcos Jr. was off on his very first official foreign trip, although he didn’t go very far. His first stop: Indonesia, where he was met by a smiling President Joko “Jokowi” Widodo.

Indonesia was proud to be Marcos Jr.’s first country to visit as president, Jokowi said, emphasizing that Jakarta and Manila have maintained amicable relations for the past 23 years. But the two nations have also been on parallel tracks for longer than that, with the political paths chosen by their respective leaders mirroring the other more than once.

For the most part, though, the main purpose of Marcos Jr.’s visit was economic, even as he aimed to sign with Jokowi bilateral agreements in defense, maritime border security, creative economy, and culture. In particular, Marcos wanted to attract Indonesian investment in the “crucial sectors” of agriculture and energy, especially with the Philippine market now facing shortages of staple commodities such as onions, garlic, salt, and sugar.

As the two countries remain economically interdependent on one another, there were few worries that Marcos Jr.’s visit would not go smoothly. In fact, the one sticky problem that had mired both countries for quite some time was that of Mary Jane Veloso, a Filipino on Indonesian death row for smuggling heroin to Yogyakarta in 2010. Veloso’s trial had been heavily scrutinized due to the absence of legal advice and Tagalog interpreters during her interrogation — appalling mistreatment considering Veloso did not speak a word of Bahasa Indonesia.

Furthermore, evidence that Veloso was a human trafficking victim had surfaced. She professed to have no idea of having narcotics in her suitcase, which was handed to her by employers under the guise of a job in Indonesia as a domestic helper.

For Indonesia, Veloso’s case was a sobering wake-up call. Initially, she was scheduled to be executed along with eight other drug traffickers on April 29, 2015. As rights organizations amassed public support in hopes of preventing state killing — an effort that rarely succeeded — there was genuine hope that Veloso and the other convicts could actually be spared. After all, just six months prior, Jokowi had been elected president in part on promises to prioritize human rights. Here was, it seemed, a president who didn’t see authoritarianism’s allure, someone who came from humble beginnings, and was a civilian leader through and through, having never been part of the military in his entire life.

But the honeymoon period of having a (nominally) progressive president was effectively over when Jokowi refused to give clemency, repeatedly citing the questionable data that 18,000 people die every year in the country from illegal drug use. Veloso herself was spared from the firing squad only because her employers handed themselves over to the Philippine police shortly before execution day, opening room for further investigation.

While Veloso’s agents were convicted of “large-scale illegal recruitment” by a Philippine court in 2020, Indonesia has yet to grant her reprieve in the face of new findings. In September 2016, just two months after he was elected president of the Philippines, Rodrigo Duterte even gave Jokowi permission to execute Veloso “according to Indonesian laws.”

By the end of that year, Reuters reported that 100 people had been slaughtered during Duterte’s drug war with its “shoot-to-kill” policy, amounting to a 97-percent fatality rate. Jokowi, measuring the popular support for Duterte’s controversial program, commenced his own war on drugs. But the international backlash prevented his administration from even getting close to replicating the bloodbath next door. 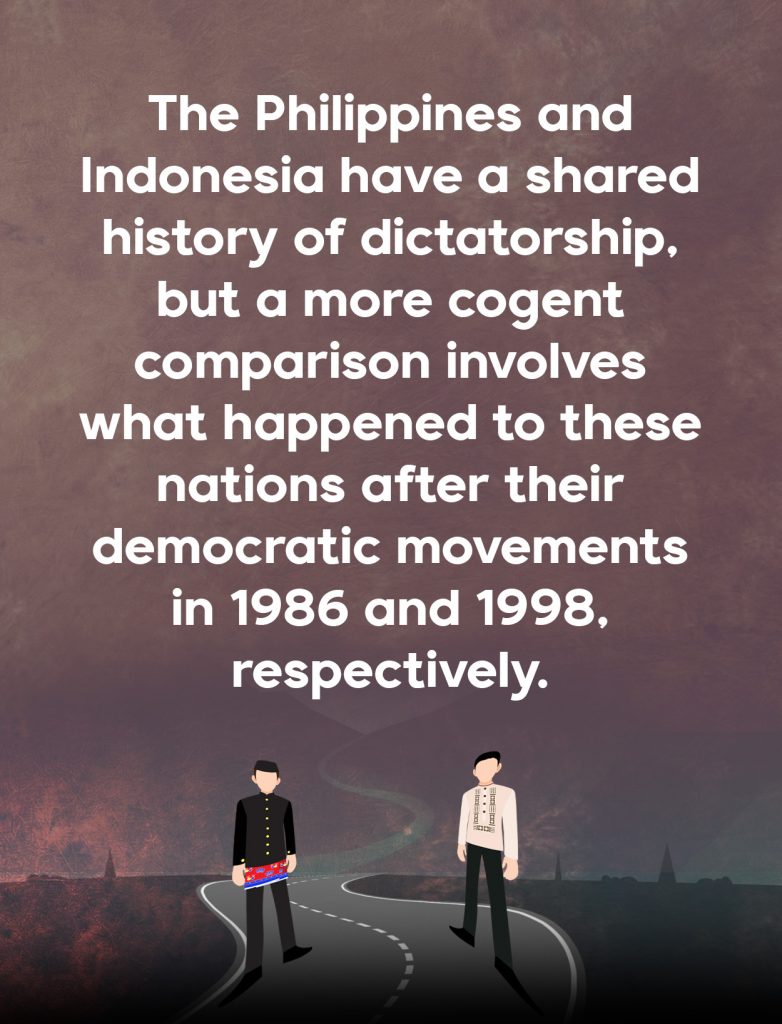 The parallel between Indonesia and the Philippines goes way back, though. In December 1965, Ferdinand Marcos Sr. — Bongbong’s father — was inaugurated as the 10th Philippine president. At that time, over 2,700 km south of Manila, Soeharto was heavily involved in the nationwide communist purge that eventually killed between 500,000 to 1.2 million, paving his way to being elected president in 1968.

Both men would have many things in common. They pursued aggressive infrastructure-building programs aided by foreign loans and allowed the free market to reign. They also shared a mutual aversion toward the communist movement.

According to a 2004 Transparency International Report, they were the most corrupt world leaders of the 20th century. Soeharto, estimated to have embezzled US$15 billion to US$35 billion, topped the list. Marcos Sr.’s takings are estimated at between US$5 billion to US$10 billion.

Yet while it is easy to point out that the Philippines and Indonesia have a shared history of dictatorship, a more cogent comparison involves what happened to these nations after their democratic movements were able to topple them in 1986 and 1998, respectively.

According to political scientist Vedi Hadiz, the transition from state authoritarianism to decentralized democracy in both countries produced uncanny side effects. During its authoritarian period, the state wielded centralized power with clear hierarchies, a top-down chain of command, and the distribution of resources. Yet the power vacuum that emerged afterward led to previously subordinated fiefdoms and sultanates scrambling for influence on a local scope. And as global financial entities such as the International Monetary Fund and World Bank advocated to empower local politicians away from Manila and Jakarta in hopes of instilling good governance, they inadvertently lent credibility to local strongmen to establish political footholds by way of “guns, goons, and gold.”

This combination of technocratic, development-oriented state policies and frantic power-grabbing in the political underbelly set the tone for both countries. In the Philippines, Benigno Aquino III, son of Philippine democratic icons Corazon and Benigno “Ninoy” Aquino Jr., came to power in 2010 promising Daang Matuwid — literally a straight path, or a conscientious government — exemplified by a popular anti-corruption campaign. During Aquino’s six-year term, the Philippines was at one point the fourth fastest-growing economy in the world, as well as the fastest-growing economy in Asia, with an annual rate of 6.2 percent.

But as international economic pundits hailed the Philippines as “a new tiger economy,” cracks in Aquino’s regime began to show. Economic growth under Aquino had failed to generate inclusive development, such as affordable electricity and water, and to solve Metro Manila’s public transportation woes. In 2013, the World Bank recorded the 40 richest Filipino families as accounting for 76 percent of their country’s newly generated growth — amounting to the highest level of wealth concentration in Asia — while Transparency International ranked the nation 95th out of 186 countries for perceived corruption.

These resulted in disenchantment that in turn gave rise to Rodrigo Duterte, who had forged his political career in the margins as the tough mayor of Davao City (located in the southern Philippines): the “local strongman” answer to Manila’s technocratic ineptitude. In many ways, Duterte’s trajectory resembles Joko Widodo’s own meteoric rise from mayor of Solo (in Central Java) to Indonesian president in three short years. And while Jokowi’s campaign employed a far softer rhetoric of inclusive democratic reform compared to Duterte’s outright firebrand approach, both are nonetheless borne out of a similar post-authoritarian political constellation — one that meshes together populist passions and the unquestionable mandate to pursue economic growth.

It was Karl Marx who said history repeats itself, first as tragedy, second as farce. As many were left bewildered to witness Marcos Jr., heir of one of the world’s most notorious and corrupt dictators, win the election with 59 percent of the votes, we are presented with the usual analysis: how he used his resources to fund massive disinformation campaigns, buy out influence, and conduct a great feat of historical distortion.

While these lamentations carry undisputed weight, the main thrust of Marcos Jr.’s campaign was actually post-populist. Instead of carving lines in the sand against an adversary, his message was that of unity: there’s too much conflict and bloodshed going around (since the democratization period), and Filipinos deserve some peace for once. He hasn’t gone all-out against Duterte’s regime, acknowledging his predecessor’s achievements and even vowing to continue the war on drugs in his “own way.” Even in matters of foreign policy, Marcos Jr. seems to be trying to balance out the influence of China and the United States — something his father was relatively successful in doing. In other words, it’s supposed to be good vibes all the way down.

Something similar also occurred in Indonesia, where two intensely polarized elections ended in a massive coalition in which Jokowi managed to absorb Prabowo Subianto and Sandiaga Uno, his presidential and vice-presidential rivals, into his cabinet. Unlike Marcos Jr., Jokowi did not campaign for national unity; he was well aware that trying to gain votes from opposition Islamist groups was a lost cause. Nonetheless, a political “unity” quickly assumed form after the elections were over as antagonism seemed to vanish overnight.

More recently, Indonesia’s government has been trying to appease its Islamic constituents by passing a conservative criminal code that would outlaw abortion, extramarital sex, and the public demonstration of contraceptive devices. The message is clear: the state can cater to your religious and socio-cultural aspirations as long as you don’t present yourself as a political threat.

All of these are the crystallization of what Benedict Anderson called the cacique democracy in the Philippines — one where every citizen has the right to vote, but cannot escape the influence of local patronage in his or her voting decision. In a more sophisticated version, political landscapes are carved out into precise interest groups, and specific acts of horse-trading are used to buy out each one. While in a populist regime there are clear winners and losers, a post-political one would try to ensure that everyone gets a slice of the pie.

The problem is that this eventually leads to very contradictory political decisions. In Indonesia, this is best exemplified by how a protracted bill to combat sexual violence was eventually ratified, to the cheer of progressive and women groups — only for the government to present a bill not long after that would criminalize sexual activities with consent to appease conservatives. The antagonism can never stay hidden for very long, and the next populist clash awaits.

Interestingly, the latest Philippine elections suggest that the way out of this vicious cycle is not through calls for good governance, which was exactly how both nations ended in a cycle of populist chaos in the first place. In her presidential campaign, former Philippine Vice President Maria Leonor “Leni” Robredo urged the Filipinos to put their trust in public institutions and liberal values, but in a way that didn’t answer this initial crisis. Her promises thus risked rubbing people the wrong way — that of “[an] equity without wealth distribution, empowerment without citizen control, [and] poverty alleviation without structural transformation.”

In the Philippines and Indonesia, the post-authoritarian project is far from over. At least this time, it’s easy to see how democratic forces in both countries should huddle in solidarity — and hopefully, find a renewed vigor through one another. ●