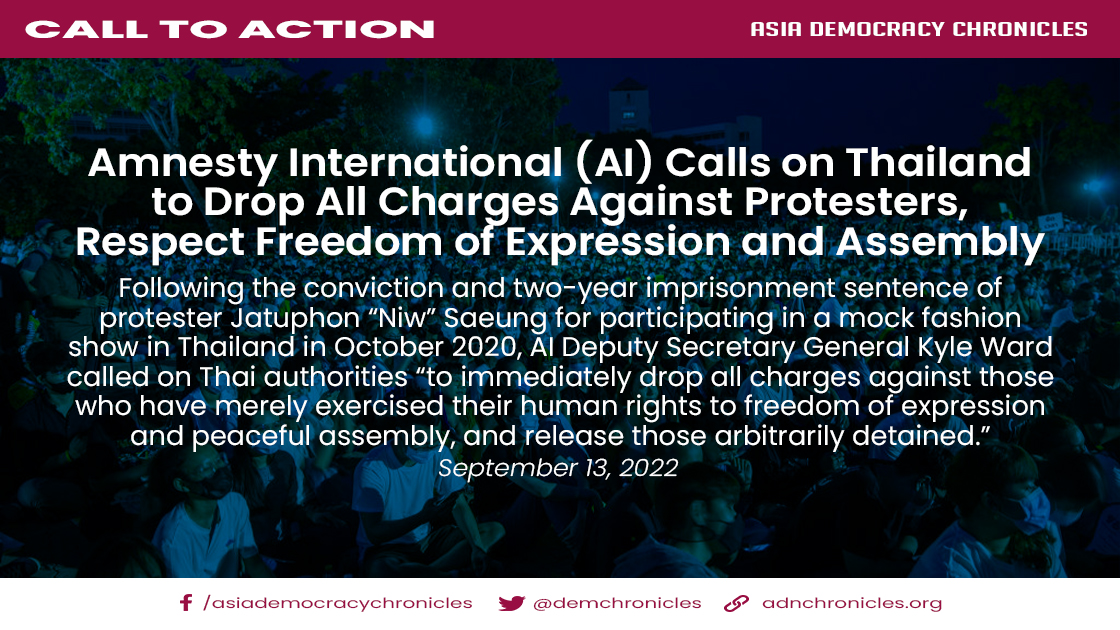 “The mock fashion show was a satirical take on the political situation of the country – a peaceful public event akin to a street festival with music, food and dancing. Participants should not be punished for participating in a peaceful assembly.

“This sentence, which is at least the 10th conviction for lèse-majesté – or insulting the monarchy – handed down since 2021, is a chilling prelude of what’s to come: a record number of 210 activists and protesters have been charged under Article 112 of Thailand’s Criminal Code since the beginning of overwhelmingly peaceful mass protests in 2020.

“We urge the authorities to immediately drop all charges against those who have merely exercised their human rights to freedom of expression and peaceful assembly, and release those arbitrarily detained.

“With protests picking up again in Thailand, this latest conviction underlines the degree to which Thai authorities continue to repress peaceful dissent.

“Thai authorities are obliged to protect the peaceful exercise of the rights to expression and assembly, but they instead continue to pursue criminal proceedings against demonstrators, many of them young people or even children. These young protesters should be free to express their opinions and participate in discussions in society, and should not face the prospect of unwarranted prison sentences and criminal records.”

The Bangkok Criminal Court in Thailand initially sentenced a protester Jatuphon “Niw” Saeung to three years in prison on 12 September 2022 after authorities charged her with insulting the monarchy under Article 112 of the Criminal Code. Under this law, anyone convicted of defaming, insulting or threatening the king, queen, heir-apparent or regent may be given a jail term from three to 15 years. The Court reduced her sentence by one-third to two years in prison due to her provision of information to the authorities. In the same case, Niw was also convicted of violating the Public Assembly Act and subjected to a fine of 1,500 THB. The Court later reduced the fine to 1,000 THB. Niw is currently detained at the Central Women’s Correctional Institution in Bangkok while awaiting the Court of Appeal’s decision on her bail request.

United Nations human rights experts have repeatedly expressed their concern at the rise in the use of the provision, and how it casts a chilling effect on the peaceful exercise of freedom of expression and assembly. UN experts and other member states have further repeatedly called on the authorities to repeal Article 112 or amend it so that it would be consistent with Thailand’s international human rights obligations.

Niw took part in a satirical fashion show on Silom Road in Bangkok on 29 October 2020. She was accused of imitating and mocking the Thai Queen by wearing a traditional Thai dress.

The October 2020 demonstration was one of dozens in 2020 and early 2021, when tens and possibly hundreds of thousands predominantly peaceful and young demonstrators, including children, took to the streets to demand political, economic and social reforms in Thailand. Authorities have filed criminal proceedings against more than 1,800 activists, including over 280 children, for participating in protests and expressing their opinions.

Since November 2020, at least 210 people, including 17 children, have been accused of committing lèse majesté, according to Thai Lawyers for Human Rights, with ten convictions handed down from 2021 to 2022, the group said.

Amnesty International does not comment on the nature of speeches deemed in breach of the provision, but urges the authorities to uphold its duty under international law to respect, protect and promote the peaceful exercise of freedom of expression.

Thailand is a state party to the International Covenant on Civil and Political Rights (ICCPR), which protects the right to freedom of expression under its Article 19 and to peaceful assembly under its Article 21. The UN Human Rights Committee, the treaty body responsible for monitoring the implementation of the ICCPR, has expressed concerns regarding lèse majesté laws. It stated that all public figures, including those exercising the highest political authority, are legitimately subject to criticism and political opposition and that criticism of state institutions should not be prohibited. Even if the alleged violation of lèse majesté is seen as a defamation-related offence, the Committee has further stated that “imprisonment is never an appropriate penalty”.

Other UN member states have continuously made recommendations to abolish the lèse majesté provision in the Criminal Code, for example at the UN Human Rights Council’s Universal Periodic Review of Thailand. The Thai government has to date always rejected these recommendations. #

Deals with Russia could ease Myanmar’s woes, but only up to a point

Deals with Russia could ease Myanmar's woes, but only up to a point

Japan defense minister likely to discuss Taiwan with US counterpart