We Call on China to Stop Repressive Policies in Tibet and Respect Freedom of Tibetans: Special Coordinator Zeya 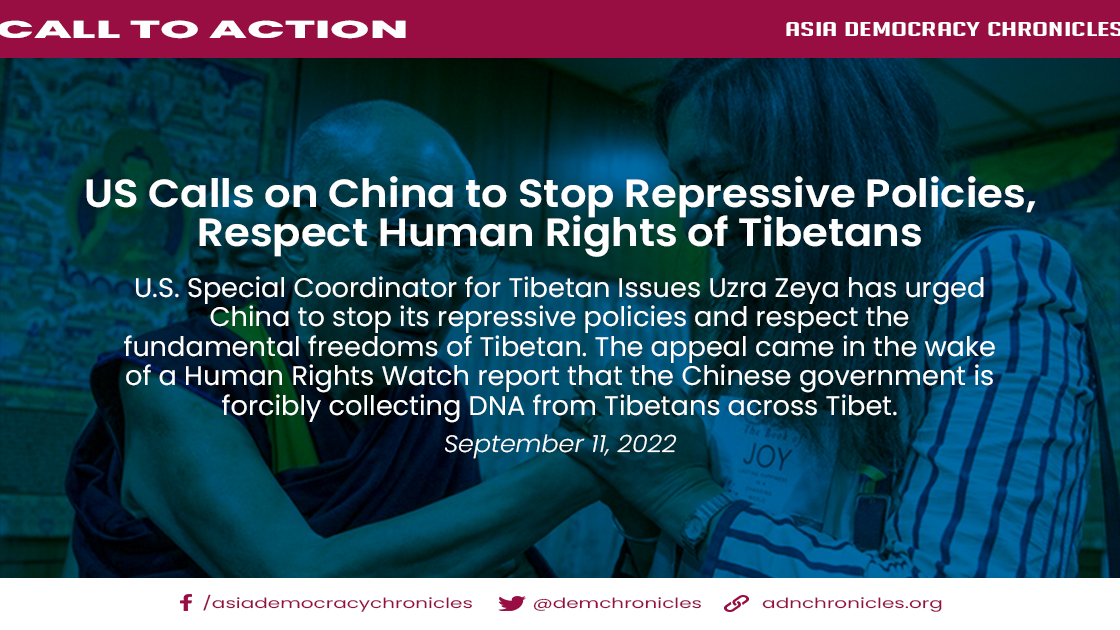 Washington, D.C — Recently, Human Rights Watch reported that the Chinese government is forcibly collecting DNA from Tibetans across Tibet, regarding the report, US Special Coordinator for Tibetan Issues expressed concern and said, “Deeply disturbed by recent reports documenting involuntary, mass DNA collection throughout Tibet, including from children as young as 5 years old. We call on the PRC to stop these repressive policies and respect the fundamental freedoms of Tibetans.”

In a report published on September 5, 2022, Human Rights Watch has identified reports of drives in 14 distinct localities (1 prefecture, 2 counties, 2 towns, 2 townships, and 7 villages) across the seven prefecture-level areas of the region, indicating that drives are taking place, or are due to take place, throughout the region.

“The available information indicates that people cannot decline providing their DNA and that police do not need credible evidence of any criminal conduct. A report from Lhasa municipality in April 2022 stated that blood samples for DNA collection were being systematically collected from children at kindergartens and from other local residents. A report from a Tibetan township in Qinghai province in December 2020 stated that DNA was being collected from all boys aged 5 and above,” the report stated.

“These mass DNA collection drives appear to be taking place in all seven prefectures or municipalities in the TAR, which covers the western part of the Tibetan plateau. The collection drives are part of ongoing efforts by Chinese authorities to establish police presence at the grassroots level throughout the region. There is no publicly available evidence suggesting people can decline to participate or that police have credible evidence of criminal conduct that might warrant such collection. The reports Human Rights Watch studied indicate that DNA was to be collected from all residents of these areas, including temporary residents. None of the reports indicate any conditions under which a resident could refuse to provide a sample,” the report said.

“Human Rights Watch has identified reports of drives in 14 distinct localities (1 prefecture, 2 counties, 2 towns, 2 townships, and 7 villages) across the seven prefecture-level areas of the region, indicating that drives are taking place, or are due to take place, throughout the region. Government procurement documents show that in July 2019 the TAR police called for bids from contractors to construct a regional-level DNA database, a further indication that officials were preparing for a region-wide collection drive. In November 2019, police in Nyingtri, a prefecture-level unit of the TAR, also announced the construction of a DNA database for the area,” the report added.

“The purpose of the DNA collection in the Chamdo municipality, one of the seven regions, was described as “improving verification efficiency and helping catch fleeing persons.” In other areas of the region, residents were told similarly that the collection of DNA was needed for general crime detection. As one official report put it, mass collection is necessary “for the public security organs to detect various illegal cases, and to effectively crack down on illegal and criminal elements,” it explained.

“Coercing people to give blood samples, or taking blood samples without informed, meaningful, and freely given consent or justification, can violate an individual’s privacy, dignity, and right to bodily integrity. It can also in some circumstances constitute degrading treatment. Compelled DNA sampling of an entire region or population for security maintenance is a serious human rights violation, in that it cannot be justified as necessary or proportionate,” Human Rights Watch said.

“The authorities’ collection of DNA from children without their informed, meaningful, and freely given consent, or that of their caregivers, and extracted in educational settings where they could not meaningfully opt out or refuse to provide their personal health data, is a violation of children’s privacy. Furthermore, the authorities’ stated use for this data – crime detection – does not appear to constitute a legitimate, proportionate purpose that serves the child’s best interest,” Human Rights Watch said.

“DNA collection in villages has been reported as part of the drive by Chinese authorities in the region in January 2022 called “The Three Greats.” Official media reports from seven areas across the region – Lhodrak (Lhokha), Gyatsa (Lhokha), Nedong (Lhokha), Chonggye (Lhokha), Chushul (Lhasa), Lhasa city (Lhasa), and Bayi (Nyingtri) – describe the drive as one of several ongoing efforts to “strengthen the grass-roots social governance system,” primarily by increasing police presence at the village level, which previously extended only as far as administrative centers referred to as townships (Ch: Xiang),” the report said.

Regarding the report, Under Secretary for Civilian Security, Democracy, and Human Rights and U.S. Special Coordinator for Tibetan Issues, Uzra Zeya said, “Deeply disturbed by recent reports documenting involuntary, mass DNA collection throughout Tibet, including from children as young as 5 years old. We call on the PRC to stop these repressive policies and respect the fundamental freedoms of Tibetans,” on its official Twitter account, September 8, 2022. #

Beyond the Headlines: Junta seeks foreign outlet to sell propaganda and hints at more media censorship

Beyond the Headlines: Junta seeks foreign outlet to sell propaganda and hints at more media censorship

Activist gets 2 years in jail for protesting ‘In Pink’