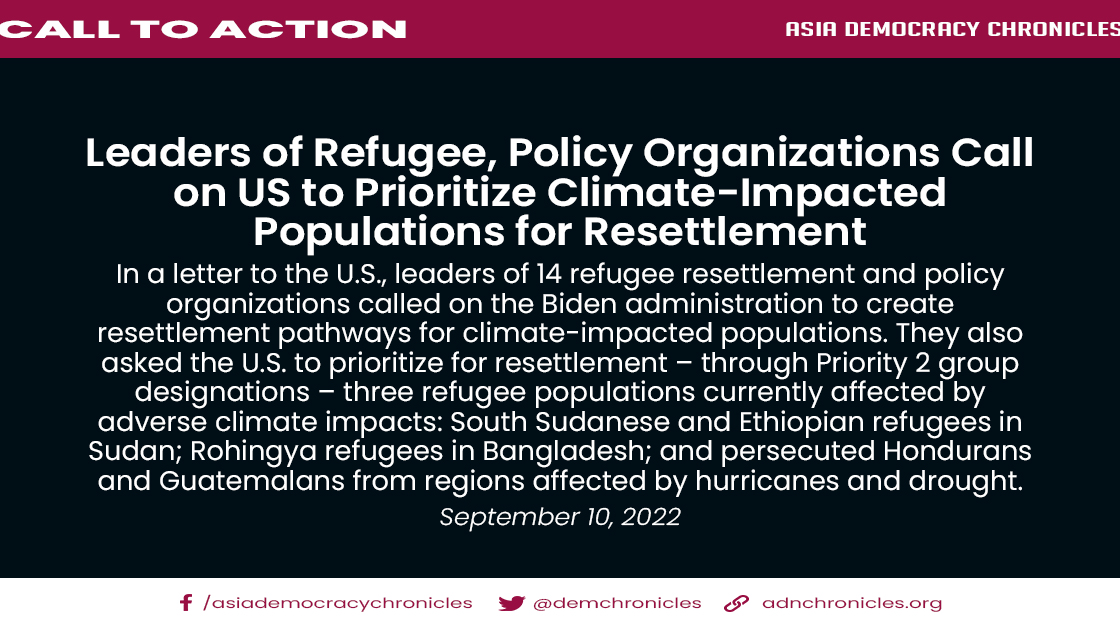 WASHINGTON—Leaders of 14 refugee resettlement and policy organizations today sent a letter to the White House calling on the Biden administration to create resettlement pathways for climate impacted populations. The letter asks that the administration prioritize for resettlement – through Priority 2 (P-2) group designations – three refugee populations currently affected by adverse climate impacts: South Sudanese and Ethiopian refugees in Sudan; Rohingya refugees in Bangladesh; and persecuted Hondurans and Guatemalans from regions affected by hurricanes and drought. The letter comes ahead of the administration’s annual report to Congress on proposed refugee admissions for the coming fiscal year.

Creating P-2 status for these groups would be a significant step toward making good on the administration’s prior commitment set forth in a February 2021 executive order to strengthen global protection for people displaced by the impacts of climate change and concretize previous administration commitments to provide protection to the specific refugee populations highlighted in the letter.

“It would also make the United States the first country in the world to implement such measures—demonstrating our leadership and commitment to addressing this issue,” the leaders wrote in their letter. “We note, however, that this is just one of the many policy options that the administration should pursue to address the intersection of climate change and migration.”

“The United States has an opportunity to set the standard for global leadership on humanely and fairly addressing climate displacement,” said Refugees International Climate Displacement Program Manager and Senior Advocate Kayly Ober. “As we’re seeing in Pakistan amidst devastating floods, climate-driven displacement is not something that we have the luxury of preparing for–it is here now. And it’s time to act.”

“Refugees are among the first to feel the impact of a warming planet, and yet often are the last to receive protection,” says Melanie Nezer, Senior Vice President of Global Public Affairs at HIAS. “The United States has the opportunity right now to reimagine U.S. global leadership on refugee protection and to rebuild the refugee resettlement program to meet the needs of today’s refugees in a changing world.”

Read the full letter and see the full list of signatories here.

How is Taipei becoming a Smart City?