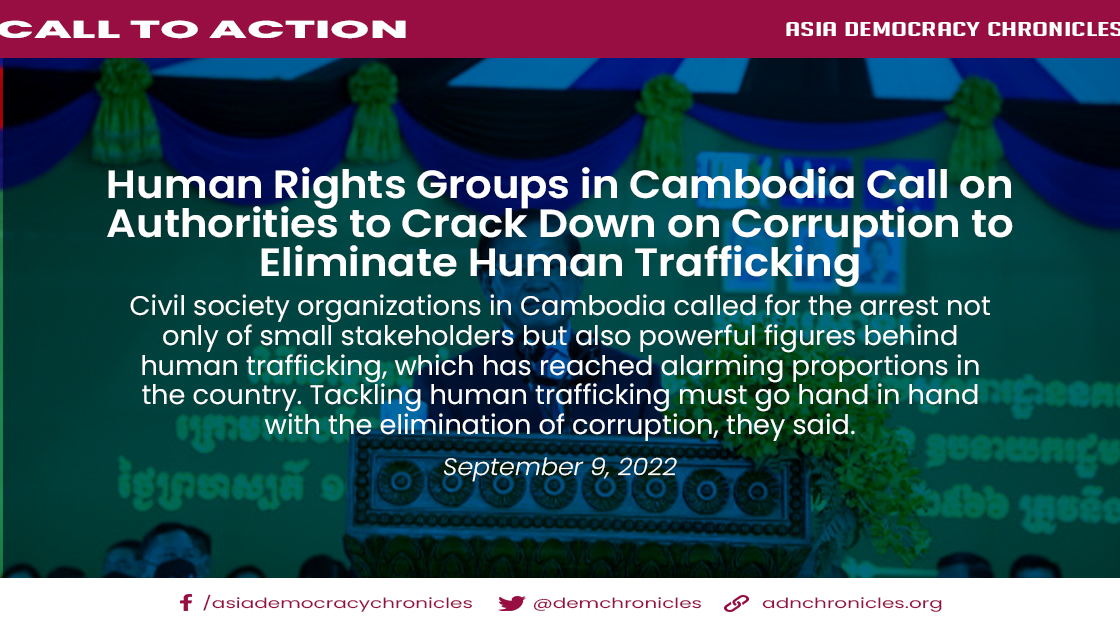 PHNOM PENH – Tackling human trafficking must go hand in hand with the elimination of corruption, civil society groups say, calling for the arrest not only of small stakeholders but also powerful figures behind the trade.

They spoke out amid multiple reports that Cambodia is a busy centre of trafficking.

Khun Tharo, program manager at CENTRAL, said human trafficking involves corruption and involves those who have the power to enforce the law. All cases need to be thoroughly investigated.

“It is collective trafficking, so it has to be solved collectively,” he said on Sept. 7 but added that the problem can’t be solved without bringing the real perpetrators to justice.

The process must involve the authorities in law enforcement or influential people before the perpetrators reach Cambodia. He wants officials to track not only minor players but also those behind the trade.

Am Sam Ath, deputy director of human right organization Licadho, said​ there is corruption when the authorities help facilitate trafficking for commissions and other benefits.

He said most of the criminals or masterminds were foreigners from Vietnam, China, China, Taiwan, Indonesia, Malaysia and Thailand.

It was a new crime that has just appeared in Cambodia, a fraudulent crime in the telecommunications system and was a problem, he said on Aug. 8.

“This telecom trafficking ring is using Cambodia as a crime scene, so Cambodia is a victim because 99.99 percent of the perpetrators are not Cambodian and the brokers facilitating the documents to send people out of their countries are also not Cambodians,” Kheng said.

Anti-Corruption Unit chief Om Yentieng said crimes that include corruption are even more dangerous, while human trafficking cases that have been found to involve corruption can be multidisciplinary with offences including fraud and money laundering.

“This requires a further level of joint investigation and a joint operation,” he said at the Regional Anti-Corruption Conference for Law Enforcement Professionals in Southeast Asia in Bangkok last month.

More than 200 participants from 18 countries, including representatives of the United Nations Office on Drugs and Crime, took part in the conference.

Yentieng said Cambodia had created the National Committee for Counter Trafficking to gather forces and measures to combat human trafficking, which had brought results and success.

Asked how many human trafficking cases Cambodia had found involved corruption, Chou Bun Eng, permanent vice chairperson of NCCT and the Secretary of State of the Ministry of Interior, said she was busy and referred the reporter to Yentieng.

Social analyst Meas Nee said to effectively address human trafficking, strict law enforcement against corruption must be in place, while people should be educated to think critically to prevent themselves from becoming trafficking victims.

Sar Kheng said on Aug. 26 that Cambodia has launched an operation to ramp up its campaign against all forms of human trafficking, forced labor and the sex trade, and to urge the public and stakeholders to share information to stop and prevent these crimes.

From Jan. 1 to Aug. 30, 87 cases were handled, with 865 people saying they were victims. Seventeen cases involving a total of 60 suspects were referred to the courts.

Last month, seven rescue operations were conducted during which 25 victims of six nationalities were freed and 23 suspects of four nationalities were captured in the provinces of Oddar Meanchey, Preah Sihanouk, Pursat, and Svay Rieng, Kheng said.

Authorities are investigating the remaining cases, Sar Kheng said on Aug. 26​ as he chaired a meeting attended by government officials and provincial governors to discuss plans to crack down on human, labor and sex trafficking.

Among the foreign victims, many were trafficked through masterminds in their countries helped by associates in Cambodia who arranged for them to enter the country illegally after being promised high-paying jobs, he said. #

Afghanistan: Renewal of the Special Rapporteur’s Mandate and Need for Stronger Accountability Measures