Afghanistan: Renewal of the Special Rapporteur’s Mandate and Need for Stronger Accountability Measures

The ICJ and many international and Afghan NGOs have issued a public letter to the members and observers of the UN Human Rights Council calling for the renewal of the mandate of the Special Rapporteur on human rights in Afghanistan and the creation of a strong accountability mechanism. 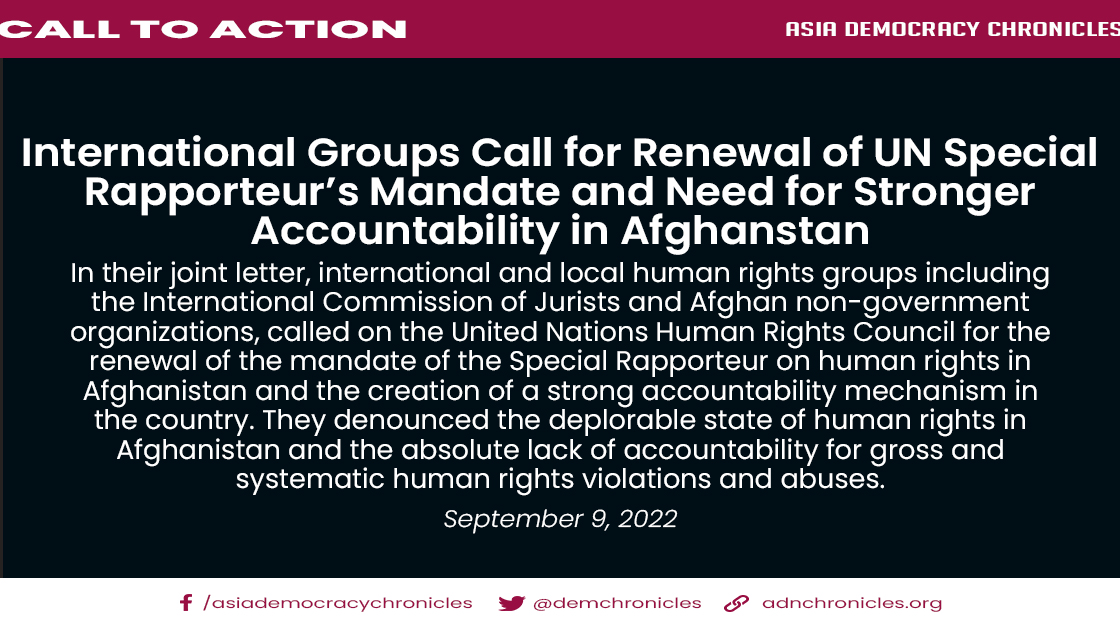 The joint letter was sent to all States Members and Observers of the UN Human Rights Council. The text is as follows:

The signatory organizations call your attention to the deplorable state of human rights in Afghanistan and in particular the absolute lack of accountability for gross and systematic human rights violations and abuses, including crimes under international law, occurring in Afghanistan, especially against women and girls, ethnic and religious minorities, journalists, and human rights defenders.

In addition, the Special Rapporteur on the situation of human rights in Afghanistan, established by the United Nations Human Rights Council (HRC) at its 48th session, provides crucial independent monitoring and reporting on the human rights situation in Afghanistan. The mandate of the Special Rapporteur is due for renewal at the 51st HRC session and we call on all UN member states to support the renewal of that mandate.

The Taliban are attempting to strip Afghan women of the full spectrum of their civil, political, economic, social and cultural rights and freedoms. They have ordered women and girls not to leave their homes unless necessary, to cover their faces in public and to be accompanied by a mahram (a male chaperone). Women are rapidly losing their ability to participate in paid work outside the home. Girls’ secondary school education has not resumed despite months of promises by the Taliban, and there are no signs that it will resume. Women human rights defenders including peaceful protesters have been the targets of violent reprisals. These discriminatory edicts and practices have been enforced by brutal displays of public violence.

On 12 August 2022, one year after the Taliban takeover of Afghanistan, a group of UN independent experts, including the UN Special Rapporteur on Afghanistan, declared that “nowhere else in the world has there been as wide-spread, systematic and all-encompassing an attack on the rights of women and girls.”

The UN independent experts affirmed that “it is time to rapidly step up efforts to ensure accountability for violations of international human rights law and humanitarian law. Impunity will only lead to further violations and deterioration of the human rights situation in the country.”

The United Nations Assistance Mission in Afghanistan (UNAMA) has documented, since August 2021, “persistent allegations of extrajudicial killings, arbitrary arrests and detention, and torture and ill-treatment carried out by the de facto authorities”.

The UN Special Rapporteur on Afghanistan, in a statement following his May mission to the country, stated that

“The de facto authorities have failed to acknowledge the magnitude and gravity of the abuses being committed – many of them in their name – and their responsibility to address them and protect the entire population. The expert is alarmed that many of the de facto authorities’ policies and drive for absolute control are having a cumulative effect on a wide range of human rights and is creating a society that is ruled by fear. The advancing erasure of women from public life is especially concerning.”

During the HRC50 Urgent Debate on the situation of the human rights of women and girls in Afghanistan, the Permanent Representative of Afghanistan made a specific call to the HRC to establish “a robust monitoring mechanism to collect, consolidate, and analyse evidence of violations, to document and verify information, to identify those responsible to promote accountability and remedies for victims, and to make recommendations for effective prevention of further violations.”

The HRC and its members and observer States have a responsibility to provide an appropriate response to the cries for accountability by Afghan and international human rights groups and UN human rights experts.

In 2021, both at the Special Session on Afghanistan in August and at HRC48 in September, civil society and several States called for the establishment of an accountability mechanism.

The Special Rapporteur mandate is essential to monitor and report on the human rights situation in Afghanistan, however, the dire situation in the country and the atrocities affecting women and girls warrant a more robust response involving in depth independent investigations to lay the foundation for accountability. The Special Rapporteur currently has neither the staffing, resources, nor mandate to undertake such in depth investigations.

Therefore, the undersigned organisations call on the Council to establish in parallel an ongoing accountability mechanism with the specific mandate:

We thank you for your attention to these pressing issues and stand ready to provide your delegation with further information as required.