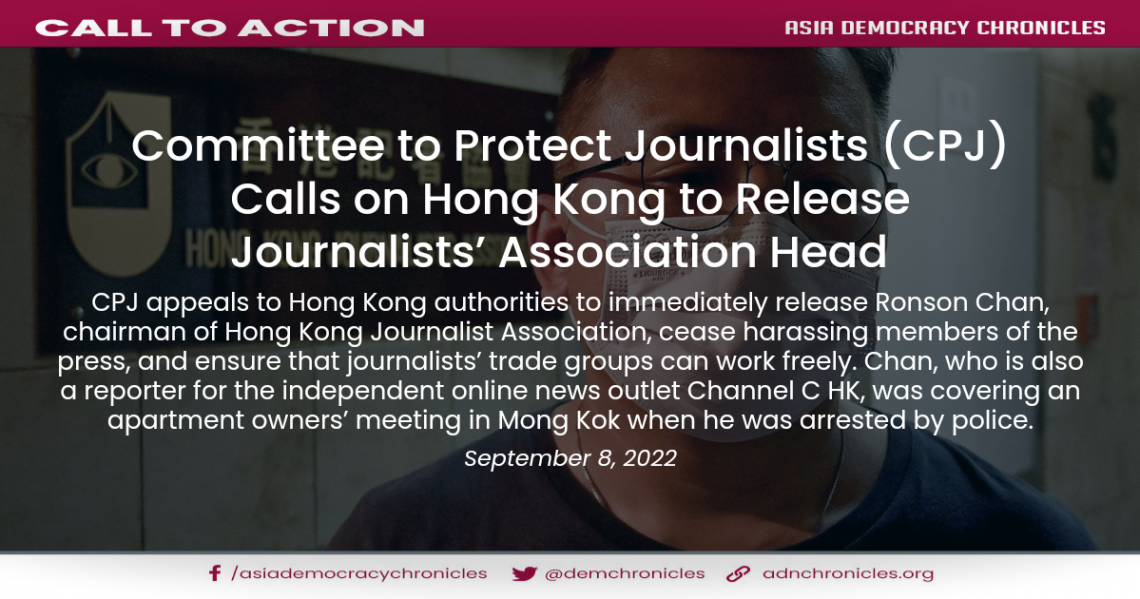 On the morning of Wednesday, September 7, Hong Kong police arrested Chan, a reporter for the independent online news outlet Channel C HK and chairperson of the Hong Kong Journalists Association, according to news reports.

Chan was covering an apartment owners’ meeting in Mong Kok when police asked to see his identity card and then took him into custody at the Mong Kok Police Station, according to those reports and Channel C HK, which said Chan had been covering the event with a videographer, who also showed his identification to police but was not arrested.

Authorities accuse Chan of obstructing police officers and public disorder, according to those news reports. He remained in custody as of Wednesday evening, according to his employer.

“Hong Kong police must stop harassing journalists and allow them to do their jobs,” said Carlos Martinez de la Serna, CPJ’s program director, in New York. “The police force’s arrest of Ronson Chan belies claims made by authorities in Beijing and Hong Kong that the city’s press is free to carry out its work unhindered.”

According to news reports, police said officers found two men at the apartment owner’s meeting behaving suspiciously and asked them to show their identification. Police identified the men as surnamed Lee and Chan, and said Lee complied with police and Chan behaved uncooperatively and was taken into custody, those reports said.

Chan, a veteran journalist and former deputy assignment editor for the now-shuttered outlet Stand News, chairs the Hong Kong Journalists Association, the city’s largest journalist union, those news reports said. The association has considered disbanding amid legal pressure but is still functioning, as CPJ has documented.

Chan was previously arrested along with five others affiliated with Stand News in December 2021. He is scheduled to leave the city at the end of September for a Reuters Institute fellowship at Oxford University, Chan wrote on Facebook.

CPJ emailed the Hong Kong police for comment, but did not immediately receive any response.

CPJ’s December 1, 2021, prison census found that China remained the world’s worst jailer of journalists for the third year in a row. It was the first time that journalists in Hong Kong appeared on CPJ’s census. #

US okays possible sale of F-16 equipment to Pakistan: Pentagon

US okays possible sale of F-16 equipment to Pakistan: Pentagon