A ‘history war’ over comfort women

A movement denying the history of comfort women has gained momentum in Japan. Some of its views are now mirrored in the country’s official stance.

t the entrance of the Women’s Active Museum on War and Peace (WAM) in central Tokyo are portraits of 179 women in their twilight years, many of them staring pensively into space under the lights illuminating the long gallery. These women are among the known survivors of the “comfort station” system of the now-defunct Imperial Japanese Army during the Second World War. Those who have passed away have white flowers adorning their photographs.

Each year, more and more portraits have flowers. Recently, rights advocates again gathered at the annual memorial at WAM for the so-called “comfort women” who have passed. At the gathering that is always held on the 14th of August, the attendees honored 14 new deaths across Japan’s former Asian colonies.

The date for the annual memorial is also the anniversary of a landmark event in the comfort women’s ongoing fight for justice. It marks the day in 1991 when three South Korean comfort women — among them Kim Hak-sun, who was the only one who revealed her name — broke a long silence to speak publicly about their ordeal. Their testimony shocked a world that was aware of the system that forced girls and young women to become sex slaves of Japanese soldiers but had not heard from the victims themselves.

In her address at the latest gathering, WAM spokesperson Mina Watanabe paid tribute to the departed women’s lives and courage. Noting that some of the women who had recently passed had requested anonymity, she said, “Their request clearly illustrates that they continued to struggle with the trauma they had experienced under the brutality of the Japanese military.” And yet, Watanabe said, Japanese society has neither examined nor apologized for what the comfort women were made to endure.

In the last decade or so, a sector of Japanese society that has always claimed that comfort women’s stories are flawed — if not false — has even gained momentum. Representing mostly the far right, this sector found support among prominent politicians as early as the 1990s. These politicians included the late Shinzo Abe, who spearheaded a pushback against Japan’s brutal wartime image and, among other things, sought to downplay state responsibility for what was done to the comfort women.

Abe was a stalwart in the Liberal Democratic Party, which ruled Japan for most of the postwar era. Abe would become Japan’s premier twice. By his second administration (2012-2020), state-issued textbooks no longer contained any references to comfort women — which actually included girls, some as young as 10 years old. The textbooks also highlighted Japan‘s World War II slogan, “Greater East Asia Co-Prosperity Sphere,” which was purportedly based on freeing backward Asia from Western rule.

Before World War II, most of Southeast Asia were colonies of Western nations; Japan controlled the Korean peninsula and parts of China. To the right-wingers, World War II was a war of liberation for Asia and the comfort women system, a licensed prostitution network. And while Japan through several prime ministers has issued formal apologies for its wartime acts, the views of conservative nationalists have seeped into the official sphere. 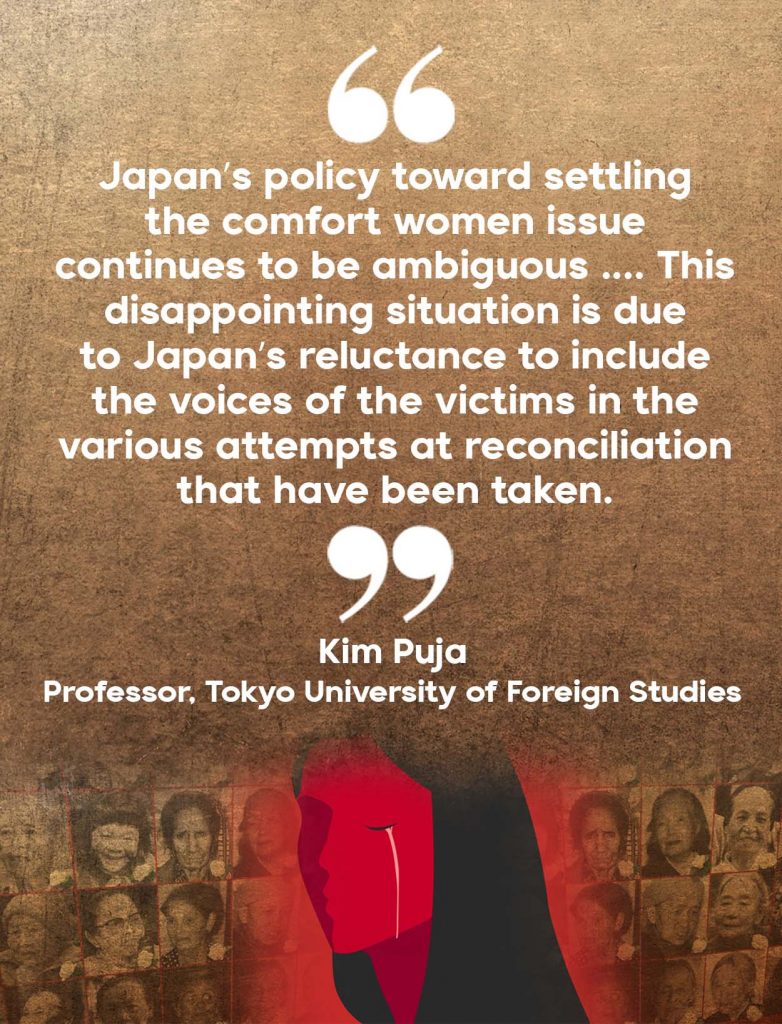 Indeed, the government’s current official stance on comfort women is that the “expression ‘sex slaves’ contradicts the facts so … it should not be used.” It also argues against “‘forceful taking away’ of comfort women by the Japanese military and government authorities” since it says that this “could not be confirmed in any of the documents that the Government of Japan was able to identify.”

This is even though sometime after Kim Hak-sun came out with her story as a comfort woman, followed by a similar tale told by Filipino Rosa Henson in 1992. Their testimonies are supported by mainstream researchers, among them noted historian Yoshimi Yoshiaki of Chuo University. In the late 1980s, Yoshiaki dug out official military documents that proved Japanese military involvement in managing the comfort women system during the Asia-Pacific War.

Scholars and civil society organizations across Asia, including Japan, and elsewhere have also gathered extensive data and published their research about the comfort station system set up by the Japanese military decades ago.

But as Tokyo University of Foreign Studies Professor Kim Puja pointed out, the comfort women issue is particularly sensitive for the conservative Japanese establishment that is seeking to glorify the past. The reality of the comfort women is a direct violation of this narrative, she told Asia Democracy Chronicles.

Kim added, “The fact that vulnerable women were systematically raped by the Japanese military is a big blow to the nationalist viewpoint. This is why nationalists refer to them as prostitutes.”

Tens of thousands of girls and young women (some estimates reach up to 200,000) across Asia were forced into the Japanese military’s comfort system between 1931 and 1945. For decades, they kept silent, largely because most of them could not bear reliving the trauma. But after Kim Hak-sun and Rosa Henson came out in public and told their stories as comfort women, other survivors began stepping out of the shadows and narrating their own harrowing experiences.

Transnational support groups were formed in South Korea, Japan, and elsewhere to assist these survivors. The goal was to force the Japanese government to admit its responsibility for the former Imperial Army’s inhuman treatment of the people in the countries Japan invaded. Forced labor that included the comfort-women system was a severe breach of individual human rights, they argued. For the survivors and their supporters, only an official apology and compensation could amend the situation.

In 1993, then Chief Cabinet Secretary Yohei Kono issued what would become known as the Kono Statement, which acknowledged the involvement of the Imperial Armed Forces in creating and supervising the comfort stations. Kono pledged to “face squarely the historical facts.” This admission of culpability also led to the comfort-women issue being included in Japanese history textbooks for a short period in the late 1990s and early 2000s. According to anthropologist Tomomi Yamaguchi, however, its inclusion beginning in 1997 in Japanese high school textbooks “triggered a sense of urgency among right-leaning citizens” to push their viewpoint more aggressively.

Groups supporting former comfort women soon began coming under more pressure from right-wingers. Kuniko Yamada, who leads Lola Net, which supports Filipino survivors, remembers a series of attacks against an education panel exhibit on comfort women that was held in Tokyo in 2009. Said Yamada: “The intimidation in the form of constant threatening emails forced us to cut short the duration of the event.”

WAM, which till now is the only museum in Japan dedicated to comfort women, also received a bomb threat in 2016. Last year, too, planned exhibits that included a statue symbolizing comfort women failed to push through because of rightwing protests.

Japan meanwhile tried to deal with the compensation issue by establishing in 1995 the semi-public, semi-private Asian Women’s Fund for former comfort women in South Korea, Taiwan, the Philippines, Indonesia, and the Netherlands. Many of the women, however, were bitterly critical of the fund and refused to accept “sympathy” payments that were sourced from private donations. Asian Women’s Fund was shut down in 2007.

In 2015, Japan and South Korea’s then-foreign ministers signed a bilateral memorandum acknowledging Japan’s responsibility for the comfort system. The agreement provided for a JPY 1-billion (US$121 billion using 2015 rates) fund from the Japanese government. Both ministers declared the issue “resolved finally and irreversibly” and agreed that their respective countries should now stop publicly criticizing each other.

The problem was that Korea’s former comfort women were not consulted beforehand. The deal was scrapped in 2017 by South Korean President  Moon Jae-in.

“Japan’s policy toward settling the comfort women issue continues to be ambiguous,” said historian Kim. “That stance has not brought positive results for either the perpetrators or the survivors. This disappointing situation is due to Japan’s reluctance to include the voices of the victims in the various attempts at reconciliation that have been taken.”

Japan’s diplomatic relations with South Korea and China, in particular, have been dogged by differing interpretations of history. Efforts to extend an official apology and redress to former comfort women have also been watered down to such an extent that many of the survivors — now in their eighties and nineties — view these as insincere and meaningless.

It has not helped that in the past several years, the Japanese government has been running a campaign to stop having memorials to comfort women built in other countries. It managed to convince the city of Atlanta, in the U.S. state of Georgia, to shelve such a project, although the planned statue was later put up in another part of the state. Lately, Japanese Prime Minister Fumio Kishida has been trying to seek help from German Chancellor Olaf Scholz to get a Statue of Peace removed from a district in Berlin.

So far, the only country that has removed a comfort-women memorial, at the apparent behest of the Japanese government, is the Philippines, where hundreds of girls and women were forced into sex slavery by the Japanese military during the war.  In 2018, the memorial — a bronze statue of a blindfolded Filipina, with her back to Manila Bay — was taken down from its Manila Baywalk spot, supposedly to make way for a drainage project. Then President Rodrigo Duterte later said that he supported its removal because “as far as I am concerned, the (comfort women) issue is over.”

The issue of former comfort women, however, is far from being resolved. Estelita Dy, a Filipino survivor who believes the statue was removed “so Japan will keep on giving funds” for Philippine government projects, admitted in a 2019 interview that she feared all their efforts would yield nothing in the end.

But she said that she and other survivors were fighting to make sure “the issue is kept alive.” Dy said: “It’s not okay for it to be forgotten.” ●

Govt to set up National Centre for Disease Control centres in all states; foundation stone laid for six