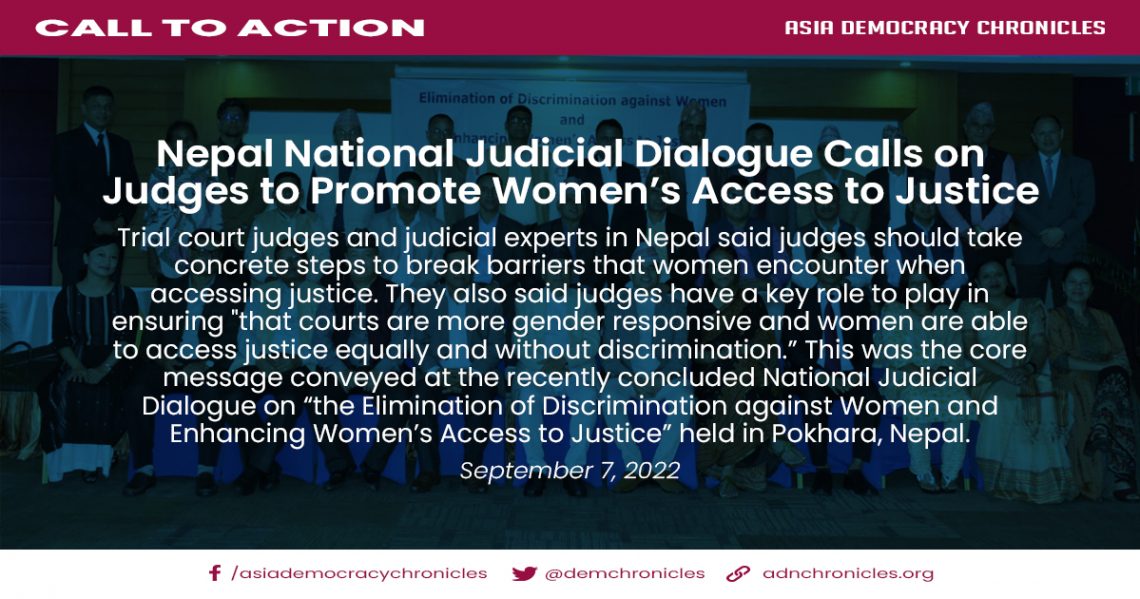 “Judges should take concrete steps to break barriers that women are still facing in accessing justice and should play key role to ensure that courts are more gender responsive and women are able to access justice equally and without discrimination”.

This was the core message conveyed at the National Judicial Dialogue on “the Elimination of Discrimination against Women and Enhancing Women’s Access to Justice” held on 19th and 20th August 2022 in Pokhara, Nepal.

This judicial dialogue specifically discussed international human rights law and standards relating to women’s rights  with a focus on the Convention on the Elimination of All Forms of Discrimination Against Women (CEDAW) and the Updated Bangkok Gender Guidance for Judges on Applying a Gender Perspective in South and Southeast Asia (BGG).

Twenty-two trial court judges  from Gandaki Province participated in the judicial dialogue, together with judicial experts from the Supreme Court and High Court. The judges also discussed and identified some specific actions that needs to be taken by individual judges and/ or the court to ensure equal access to justice for women. These actions  include creation of women-friendly infrastructure, adoption of gender sensitive behaviours and language, establishment of a help desk for women, taking appropriate measures to make the legal aid service more effective and proper arrangements for victims and witness protection.

Ms. Nahla Haidar El Addal, ICJ Commissioner and Vice-chair of the CEDAW Committee, in her opening remarks, said that “judges’ have key responsibility to make courts accessible and more gender-friendly”. She encouraged participating judges “to promote and advance gender sensitivity within the courts”. She emphasized the need for the judges to adopt and promote the Bangkok General Guidance, both formally and informally, in the course of their work.

Justice Sapana Pradhan Malla, justice of the Supreme Court of Nepal, highlighted that Nepal has a progressive Constitution and the Supreme Court has established many  precedents on equality, non-discrimination and access to justice. Despite this progress,  many barriers still exist for women in accessing justice. She pointed out that “judges have an important role for the elimination of  such barriers and to ensure that courts become more gender-responsive”.

Highlighting objective of the program, Ms. Laxmi Pokharel, Nepal National Legal Adviser in the Women’s Access to Justice Project explained that, “the Updated Bangkok Gender Guidance for Judges on Applying a Gender Perspective in South and Southeast Asia was developed to assist judges of South and Southeast Asia to apply a gender perspective in the administration of justice and ensuring equal access to justice for women”.

Ms. Subha Ghale, Programme Analyst of the UN-Women Nepal shared that UN-Women is also focusing on the implementation of the CEDAW and said that the dialogue will be more usefule for the judges to carry out their work in more gender sensitive manner.