The abduction and forced conversion to Islam of young girls and women from religious minorities is ramping up in Pakistan.

he abduction and forced conversion to Islam of girls and women belonging to religious minorities has long been an issue in Muslim-majority Pakistan. There are indications that the problem has worsened in the last few years. Indeed, even the international community has taken note of the practice, with increasing calls for the Pakistani government to take action.

In its 2022 report, the U.S. Commission on International Religious Freedom endorsed the redesignation of Pakistan as a “country of particular concern … for engaging in systematic, ongoing, and egregious violations of religious freedom,” among them forced conversions. Included in the commission’s recommendations was for Washington to enter into a binding agreement with the Pakistani government to “encourage substantial steps to address religious freedom violations with benchmarks” such as holding “accountable individuals who incite or participate in vigilante violence, targeted killings, forced conversions, and other hate crimes.”

Early this year, British Conservative MP Fiona Bruce also brought up the issue of forced conversions in the House of Commons, urging her colleagues to “call this out more strongly, and challenge it to see change.” Just recently, too, Archbishop Sebastian Shaw of Lahore spoke up against the practice, which he said is so serious that “children are not even free to play in the garden.”

About 96.5 percent of Pakistan’s more than 220 million people are Muslim. Hindus and Christians have the largest numbers among the country’s religious minorities. The former makes up 1.27 percent (2.8 million) of Pakistan’s population, according to the 2017 census, while the latter accounts for 1.73 percent (3.8 million).

According to the rights group Movement for Solidarity and Peace,  nearly 1,000 girls and women belonging to religious minorities were forcibly converted and married each year in Pakistan from 2018 to 2020. In its latest Religious Freedom in the World Report, however, the group Aid to the Church in Need quoted the head of the non-profit Human Rights Commission of Pakistan (HRCP) as saying that the figure has since doubled to 2,000.

“There seems to be a forced conversion pandemic in Pakistan, particularly in the Sindh province (where the majority of Pakistani Hindus live), due to the poverty, vulnerability, and absence of criminalizing the conversions,” human rights lawyer Osama Malik told Asia Democracy Chronicles. “Politicians seem to lack the will to tackle this because of fear of retaliation from religious groups.”

Lala Robin Daniel, a Christian activist who campaigns against the forcible conversion of minorities in the Faisalabad district in Punjab province, also said, “Young girls from the tiny religious minority groups such as Christians and Hindus are vulnerable and easy targets of forced conversions due to lapses in the law, and the police and judicial system mocking at the activists and families seeking justice for their daughters.”

Other activists note that many cases actually go unreported because the victims’ families are fearful not only of the perpetrators but also of the authorities and religious leaders who condone these acts. ADC approached some of the victims and their parents, but most of them declined to be interviewed, citing security concerns.

Sahib Odh was one exception. The father of Pooja Kumari, who was murdered in March 2022 by her would-be abductor, Odh recounted to ADC how his 18-year-old daughter had been repeatedly threatened by a Muslim man belonging to an influential landlord tribe in southeastern Sindh. He said that they complained to the police, but no action was taken.

Days later, Kumari’s suitor tried to carry out his threat of abducting her and then making her convert. When she resisted, he killed her in broad daylight.

In the weeks leading to Kumari’s death, several abductions and forced conversions had also been reported by media and rights organizations. Among the victims was Bindiya Meghwar, a Hindu said to be a minor, who was forcibly converted to Islam and married to a Muslim man in Khairpur district in Sindh. At least two 15-year-old Christian girls were abducted in separate incidents in March as well in Punjab province and were married off, while an 18-year-old Christian midwifery student was kidnapped on her way to a training facility in Karachi in late February, and is presumed to have suffered the same fate as the two 15-year-olds. 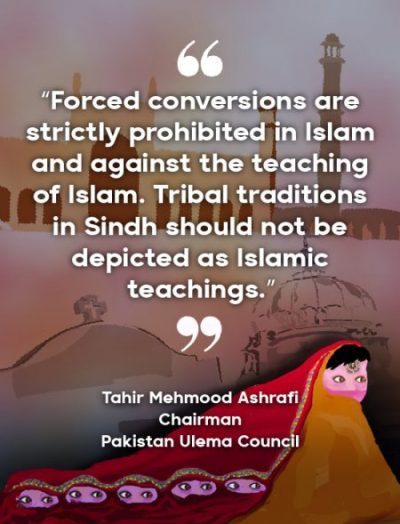 One of the cruelest cases of abduction and forced marriage happened in 2020. A 12-year-old Christian girl was abducted in Faisalabad and apparently kept chained in a cattle pen for six months. According to her father, she had also been raped repeatedly by her abductor and forcibly converted to Islam.

Police detained her abductor at the instigation of her family, but he was later released on the basis of a medical certificate saying that the girl was 16. The victim had also testified before a magistrate that she had consented to marry her abductor. (In Pakistan, the legal marrying age is 16 years old for women, and 18 for men, except for Sindh, where, for both sexes, only those 18 and above can marry.)

One reason why the practice has been tolerated even by those in power is that for far too many Muslims in Pakistan and elsewhere, converting followers of other faiths into Islam and marrying them off to Muslims are seen as pious acts, even if these were done by force.

In Sindh, there are even at least three Muslim seminaries that have gained notoriety for allegedly being hubs of forced conversion of Hindu girls and their subsequent marriage to Muslim men.

Tahir Mehmood Ashrafi, chairman of the Pakistan Ulema Council, an umbrella organization constituting Islamic clerics and religious scholars, told ADC, however, that “Forced conversions are strictly prohibited in Islam and against the teaching of Islam. Tribal traditions in Sindh should not be depicted as Islamic teachings.”

Moreover, there have been indications that in several cases, the victims had actually been trafficked for sex, with their conversion and marriage merely used to cover up that crime. There have been allegations as well that some Muslim clerics are tolerating — if not promoting — the conversion to Islam of girls from other faiths and marrying them to Muslims primarily to make money, with the help of corrupt local police.

Unfortunately, said the HRCP, “the ugly reality of forced conversions is that they are not seen as a crime, much less as a problem that should concern ‘mainstream’ (Muslim) Pakistan.”

Little to no official action

“Successive governments failed to tackle this issue and are even reluctant to bring law against this heinous practice,” human rights activist Kapil Dev pointed out. “There is a need to introduce or at least start a debate on legislating the Special Marriage Act, like in India and a few other countries, allowing adult couples from different religions to marry without changing their respective faith.”

For his part, legal expert Malik said, “Back in 2016, the Sindh assembly unanimously passed a bill to criminalize forced conversions, but the Sindh provincial government advised the governor not to sign the bill. Since then attempts have been made to pass similar bills at the national and provincial level, but none of these has made it past the committee stage.”

In October 2021, a special parliamentary committee formed to study the matter rejected an anti-forced conversion bill after opposition from the Ministry of Religious Affairs.

More than a year earlier, then Prime Minister Imran Khan had ordered an investigation on the forced conversion of religious minorities into Islam. But that was only after the abduction and conversion of two teenage Hindu sisters and their subsequent marriages to Muslim men sparked a spat between India and Pakistan.  A Pakistani court later ruled that the two sisters had converted to Islam voluntarily. Khan was ousted in April 2022; nothing ever came out of the investigation he ordered.

In the meantime, the abductions and forced conversions continue. There are some cases, like that of Pooja Kumari’s, where the perpetrator is caught and detained. But according to her uncle, the head of the local jirga (tribal council) intervened in the matter, and it has now been decided that the 24-year-old murder suspect will pay her parents PKR 1,800,000 (US$8,700).

“He is still in jail but will be free once he pays the amount,” Kumari’s uncle said.

“My daughter preferred death instead of going with him,” Sahib Odh, a brick kiln laborer told ADC, “but under this system, we have no hope for justice.”

He also said that the family has fled their village and is “staying at some other safe place.” Added Odh: “My other four daughters are frightened and shaken up by their elder sister’s tragedy.”•