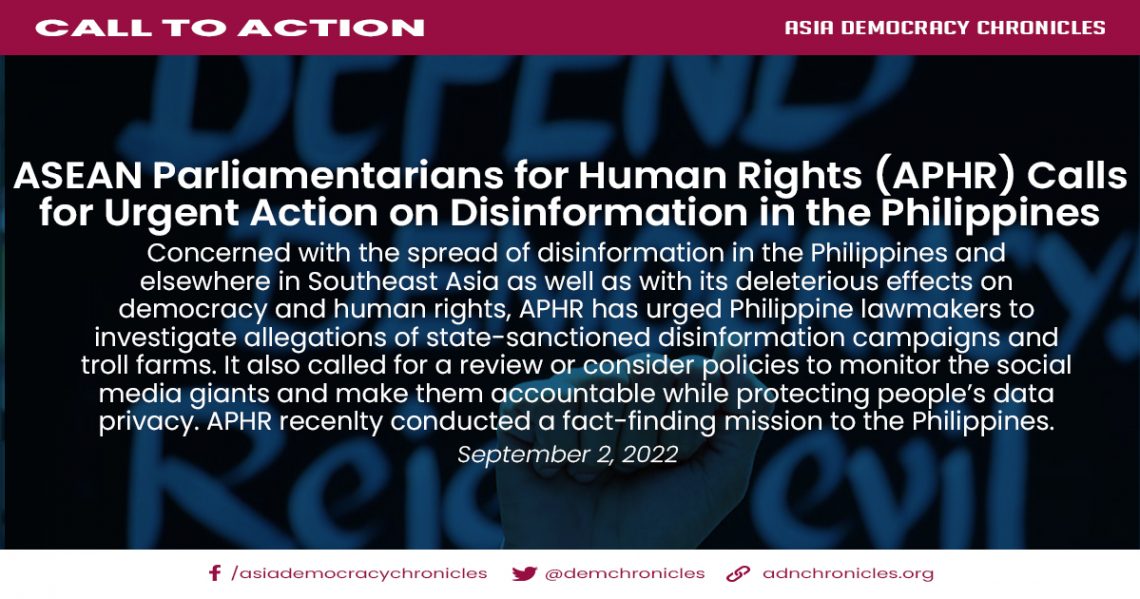 MANILA – We, Parliamentarians from Southeast Asia, concerned with the spread of disinformation in our region and its deleterious effect on democracy and human rights, have visited the Philippines, often described as the “patient zero” of the disinformation pandemic, in order to study this phenomenon, meet stakeholders who have been victimized by it and seek effective ways to combat it.

ASEAN Parliamentarians for Human Rights (APHR) has conducted a Fact-finding Mission to the Philippines with two sitting members of parliament from Malaysia, Maria Chin Abdullah and Kelvin Yii Lee Wuen, and a former representative from Thailand, Pannika Wanich. The mission has served to throw light on the fact that disinformation not only endangers elections, but democracy at large.

Disinformation campaigns in the Philippines are often state-sanctioned, targeting members of the opposition, journalists, human rights defenders, and activists.

These campaigns pose a direct threat to democracy because they are based in blanket accusations that generate extreme polarization by leveling down social complexities and imposing absolute dichotomies between enemies and friends, thus eliminating pluralism and the conditions for civilized dialogue, the cornerstones of a healthy democratic life. This has been shown clearly in the Philippines during the most recently held elections, when the widespread practice of “red-tagging”, accusations of links with the Communist insurgency, were used as weapons against political enemies, often leading to dire consequences.

“Disinformation often generates hatred, especially against vulnerable groups such as women. These campaigns are often strongly misogynistic, pandering to the worst societal prejudices against women and marginalized communities. The fight against disinformation is also the fight for equality and social justice, and civil society organizations fighting for the rights of women, LGBT communities and other vulnerable groups should play a prominent role in combating this problem,” said Ms. Chin Abdullah, also a member of APHR.

Disinformation thrives in environments where mainstream media, the traditional watchdog of those in power, has been widely discredited, and social media prevails as the main source of information. In the Philippines, 68% of the country’s population have regular access to the Internet, and there are over 92 million recorded social media users making the county a real battleground for disinformation. Filipinos are also more active on social media than their counterparts in any other Southeast Asian country, averaging 255 minutes of social media use per day.

The algorithms used by the social media giants generate “echo chambers” where users only find confirmation of their biases and are rarely exposed to contrasting opinions. In social media there are no journalistic standards, and opinions and facts mingle to the point of being indistinguishable. That makes the work of fact-checkers extremely important, but they can barely tackle the problem. As one of the participants said during a roundtable in our fact-finding mission, “fact-checking is five times slower than fake news.”

“The Philippine Parliament is urged to play an important role to investigate allegations of state-sanctioned disinformation campaigns and troll farms, and review or consider policies to monitor the social media giants and make them accountable while protecting people’s data privacy. But any legislation introduced as a way of tackling the disinformation pandemic should be limited and handled with extreme care, as it could be easily turned into censorship in the hands of authoritarian regimes, and it should never impinge on freedom of expression,” said Ms. Wanich.

Nevertheless, APHR welcomes initiatives to address the issue such as the formation of Task Force Kontra (Against) Fake News by the Philippine Commission on Elections (COMELEC). We urge them to ensure transparency and table the results of such efforts in Parliament and make the reports public.

Throughout the fact-finding mission, it was often repeated that disinformation in the context of elections began long before the campaign period. It was revealed that organized and coordinated campaigns of political disinformation had been going on for years before the latest polls, amid a backdrop of impunity and censorship. When stakeholders started to take action against this phenomenon, there was a realization that it was already too late and the extent of disinformation had already been well-entrenched.

“The disinformation pandemic, in the Philippines and beyond, is too big to be addressed with piecemeal measures. It is necessary to find both a vaccine and a cure that work on a massive scale. The fight  against disinformation must be part of national agendas everywhere with governments, civil society, and media rowing in the same direction. These agendas should include campaigns of voters’ education, media literacy programs, well-calibrated legislation, and fact-checking initiatives,” said Mr. Yii Lee Wuen. #