Manila: On the International Day of the Disappeared 2022, the Asian Federation Against Involuntary Disappearances (AFAD) calls for the protection, NOT PERSECUTION, of human rights defenders and advocates.

byThe Guardian
in Statements
Reading Time: 2 mins read
A A
0 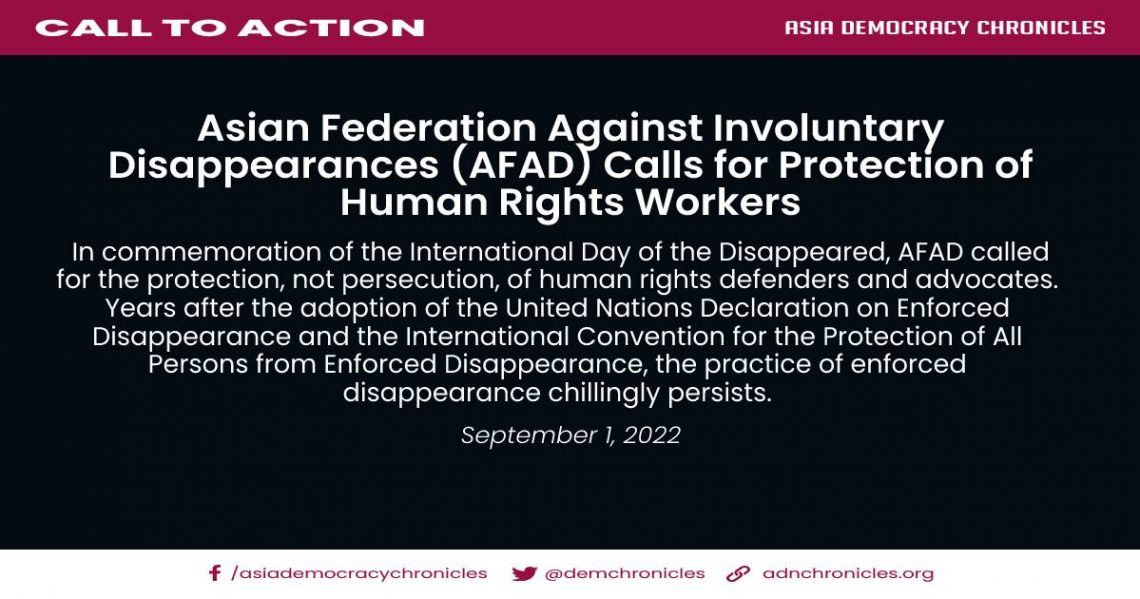 In recent years, human rights defenders, journalists, civil rights activists, and political dissenters have
been increasingly subjected to persecution and enforced disappearance, among other types of
harassment. In most cases, families, particularly women and children, are left to cope with
detrimental socio-economic, cultural, and political consequences of the disappearance.
Across Asia, AFAD member organizations in Bangladesh, Jammu & Kashmir, Nepal, Pakistan, Sri
Lanka, Indonesia, Philippines, South Korea, Thailand, and Timor Leste, have been working in difficult
environments due to relentless repressive actions by their respective States. State repression
intensifies as AFAD member organizations successfully provide hundreds of families of the
disappeared with the platform to actively and positively contribute in the struggle against enforced
disappearances. By organizing and mobilizing the families of the disappeared, AFAD member
organizations have contributed significantly in mitigating the negative impacts of the disappearance.
On the other hand, in their search and fight for truth and justice, the families evolve from victims to
survivors and ultimately become defenders as they raise their collective voice against the crime of
enforced disappearance.

Enforced disappearance is a non-derogable human right and is universally and unconditionally
prohibited under international law in any given circumstance, be it in times of peace or war. It
becomes a continuing offence until such time that the whereabouts of the missing person is
determined. Unfortunately, the pervading culture of impunity and lack of accountability by the
States across Asia make the struggle of the families of the disappeared even more difficult and
painful.

There are only 98 signatories to ICPPED out of 193 UN member states, leaving family members
bereft of legal remedies to seek justice. Legal procedures, if there are any, are often tedious and
exhausting. State authorities often silent or in denial of allegations and reports of disappearances.
Authoritarian regimes even exert efforts to invalidate the claims of the victim families.