Thailand: Government and Companies Must Effectively Implement Commitments Under the National Action Plan on Business and Human Rights 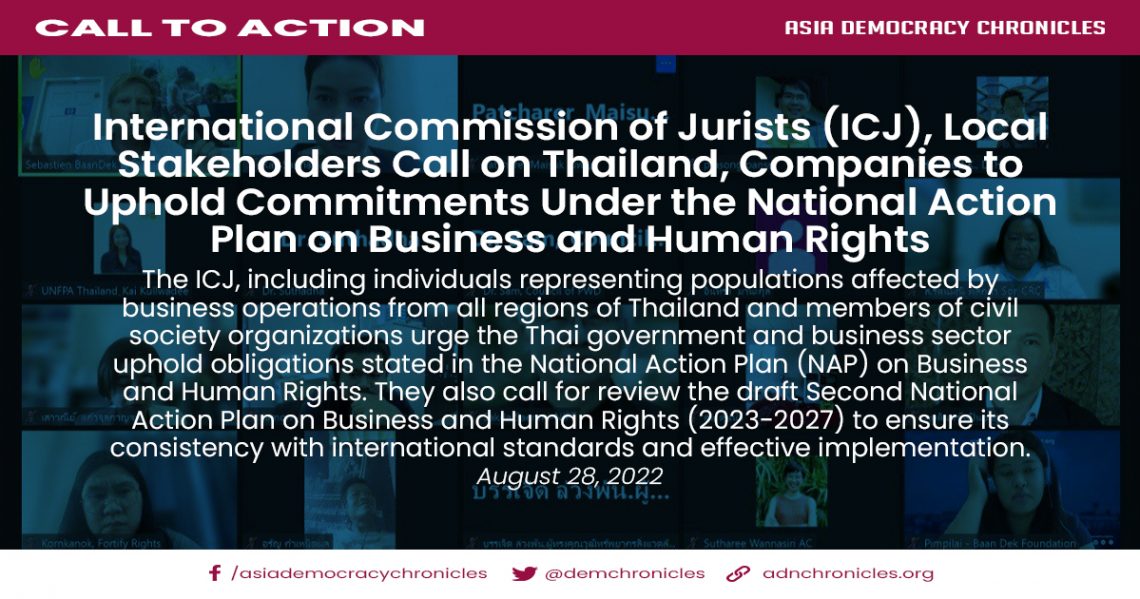 The draft Second National Action Plan on Business and Human Rights (2023-2027) (NAP), now being considered in a public hearing (2 August to 19 September), must be reviewed to ensure its consistency with international standards and effective implementation, urged participants of the online discussion organized by the International Commission of Jurists (ICJ) and partners on 18 and 19 September 2022.

Since the adoption of the UN Guiding Principles on Business and Human Rights (UNGPs) more than a decade ago, NAPs have been drawn up by governments around the world setting out commitments and priorities to effectively tackle challenges of adverse human rights impacts of activities by businesses.

Participants at the ICJ’s event included some 75 individuals representing populations affected by business operations from all regions of Thailand, members of civil society organizations, relevant governmental officials, and representatives from the business sector.

Thailand’s draft NAP emphasizes the duties of State agencies to review and amend certain laws, regulations and orders that are not in compliance with human rights laws and standards; ensure accessibility of mechanisms for redress and accountability for damage done to affected communities and individuals; and act to overcome the barriers to meaningful participation of communities and key affected populations. It also sets what businesses must do to fulfill their responsibilities under the UNGPs to “respect” human rights on a variety of key priority issues.

The ICJ and other participants underscored that there had been a lack of evident and tangible progress in the NAP’s implementation process, which was made worse by the COVID-19 pandemic. The inefficacy of NAP’s monitoring mechanism, chaired by the Director-General of the Ministry of Justice’s Rights and Liberties Protection Department, was said to be an obstacle to the protection of people against business-related human rights abuses and access to effective remedies for victims.

While noting that the draft Second NAP make more reference to international law and standards in relation to several action points, participants of the online discussion expressed additional concerns, including:

Participants also pointed out that the public hearing period for the draft Second NAP was too short. Initially, it was announced that the draft NAP would be posted on the website of the Ministry of Justice’s Right and Liberty Protection Department for public hearing only for the period between 2 and 19 August 2022. However, at the end of the panel discussion, in response to the concern raised at the event, the Ministry of Justice announced that the hearing period would be extended to 19 September 2022.

The outcomes of the discussion and recommendations will also be submitted to the NAP Monitoring Committees.

The UN Working Group on Business and Human Rights strongly encourages all States to develop, enact and periodically update a NAP as part of the responsibility of States to disseminate and implement the UNGPs. This is needed to further efforts at getting companies to respect human rights, hold them accountable, and provide access to justice for victims when companies engage in abuses.

On 29 October 2019, the Thai Cabinet approved and adopted the First NAP (2019-2022), making Thailand the first country in Asia to adopt the stand-alone NAP.

The draft Second NAP (2023-2027) is posted on the Ministry of Justice’s Right and Liberty Protection Department website between 2 August and 19 September 2022 for the public to register their concern. It will later be shared with the Cabinet before being adopted as a Cabinet Resolution.

The event was co-hosted with:

The recording of the public seminar is available here.

Thai job seekers warned about offers of highly paid work in Cambodia, Myanmar and the Philippines