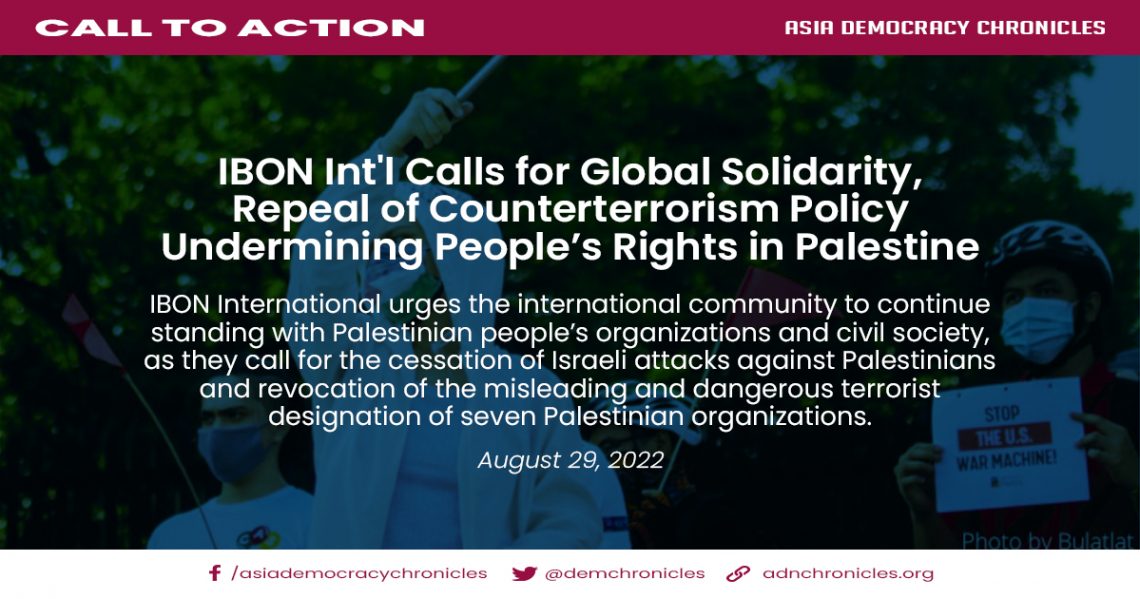 Six of the seven organisations have been designated as “terrorists” in October 2021 under the Israeli occupation’s 2016 Anti-Terrorism Law, on the government pretext that the CSOs finance armed Palestinian resistance organisations. Authorities have continued to intimidate Defence for Children International – Palestine director, Khaled Quzmar, and Al-Haq director, Shawan Jabrin, with threats of interrogation and arrest.

IBON International condemns these recent spate of attacks against the Palestinian people. We support the calls of the seven Palestinian organisations to revoke the misleading and dangerous terrorist designation. In actuality, these organisations work for Israeli government accountability, as well as provide support to Palestinian political prisoners and victims of human rights violations.

The raids and threats attempt to incite fear among Palestinian civil society and Palestinian solidarity networks. It is part of a larger arsenal of US-backed Israeli militarism to sustain a regime of occupation and apartheid, against people’s rights, self-determination, and development. To date, the US has provided USD 150 billion in military and economic aid to Israel.

IBON International reiterates calls to repeal counterterrorism policies that undermine people’s rights and threaten rights defenders, people’s organisations, and civil society. States across the world, as part of the US-led “war on terror,” have adopted such laws which restrict civil-political rights – from Palestine, to India, Hong Kong, and the Philippines. In the Philippines, members of Rural Missionaries of the Philippines, a faith-based organisation advocating for peasants’ right to land, have been targeted with repression on unfounded accusations that they fund Maoist armed movements.

$200 million to be allocated to protect nature in Mongolia