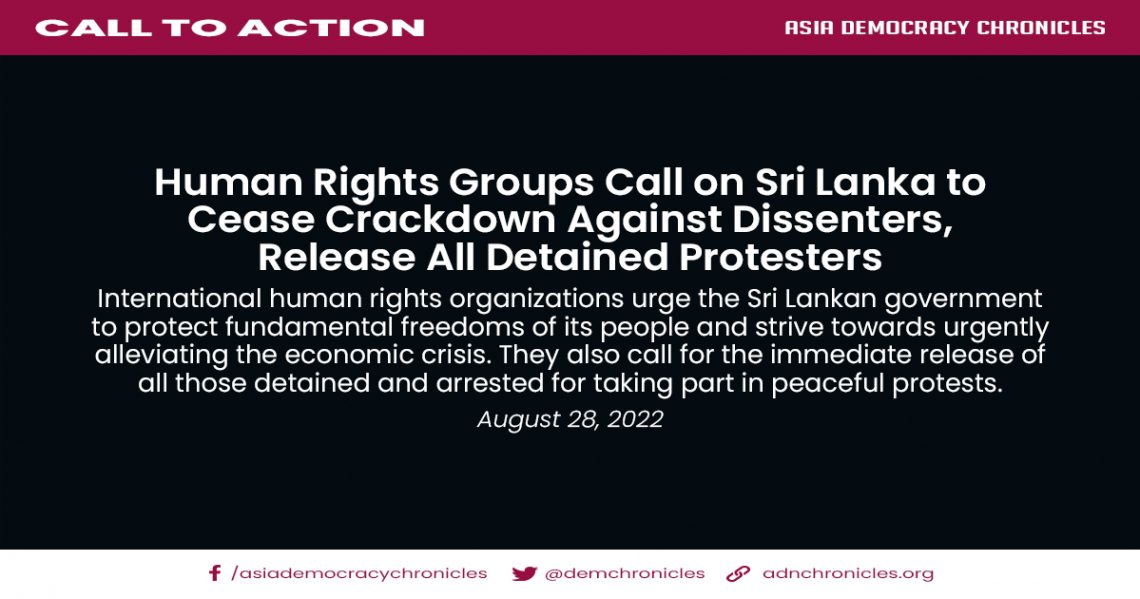 Re: Crackdown on human rights defenders and peaceful protests in Sri Lanka

We, the undersigned organisations, are gravely concerned by the rapidly deteriorating human rights situation in Sri Lanka as evidenced by the series of crackdown and excessive use of force against human rights defenders, protestors, journalists, and rights activists who took part in the recent peaceful protests. This is a gross violation of the fundamental rights guaranteed under the Constitution of the Democratic Socialist Republic Sri Lanka, in particular Article 14 which protects the freedoms of speech and expression, assembly, and association of all Sri Lankans. Additionally, the unnecessary, excessive, and disproportionate measures and force wielded against peaceful protestors blatantly violate the international human rights obligations of Sri Lanka, in particular the International Covenant on Civil and Political Rights.

There is a discernible pattern that the government is wielding repressive laws including Prevention of Terrorism Act (PTA) and measures to stifle debate and dissent in the country. On 18 July, the then acting President Ranil Wickremesinghe declared an emergency order which consequently proscribed peaceful assemblies. The emergency declaration from the executive in the name of public safety served as a pretext for reprisals and crackdown against peaceful protests and human rights defenders.

Following the election of Ranil Wickremesinghe as the new President on 20 July, the main protest site at Galle Face Green was ordered to be removed, causing violent dispersion and arbitrary arrests of peaceful protestors during an overnight operation involving the army. Over 50 protestors, including lawyers and journalists, were injured during the crackdown. Since then, over 100 people have been arrested and police have unlawfully raided homes of the protestors. We strongly condemn such acts of reprisals by the new government, on which the people of Sri Lanka had hope towards seeking accountability, justice, and economic recovery.

The arrest of prominent protest leader Joseph Stalin, the judicial harassment of another protest leader Jeewantha Peiris, and the detention of human rights defenders and student leaders Chinthaka Rajapaksa, Wasantha Mudalige, Hashan Jeevantha Gunathilake, and Galwewa Siridhamma under the draconian PTA are emblematic cases that attest to the government’s intention to stifle dissent and curtail the fundamental rights of the Sri Lankan people. Arbitrary use of PTA against peaceful protestors, which allows arrest without warrant and prolonged detention, is a blatant tactic to quell debate and dissent in the country.

These incidents and the blanket order given to the army ‘to do whatever necessary’, starkly contravene the speech made by Your Excellency President Wickremesinghe on 3 August where you acknowledged peaceful protest as a fundamental right and pledged to protect protestors.

The country’s economic crisis has unleashed a wide range of human rights violations of all sections of people. The people of Sri Lanka have their right to assemble peacefully and express their opinion and seek accountability and justice about the ongoing economic crisis which has severely affected their daily lives. Sri Lankans are demanding government accountability for plunging the country into a whirlwind of crisis and the incumbent government must immediately cease all acts of reprisals against protestors and stop blaming each other. Instead of harassing and indulging in acts of reprisals against the protestors, the government must protect fundamental freedoms and strive towards urgently alleviating the economic crisis.

We therefore call on the Government and all relevant authorities in Sri Lanka to:

Harmony, plurality of ideas and democracy

Heatwave, drought in China have far-reaching implications - and more problems lie ahead