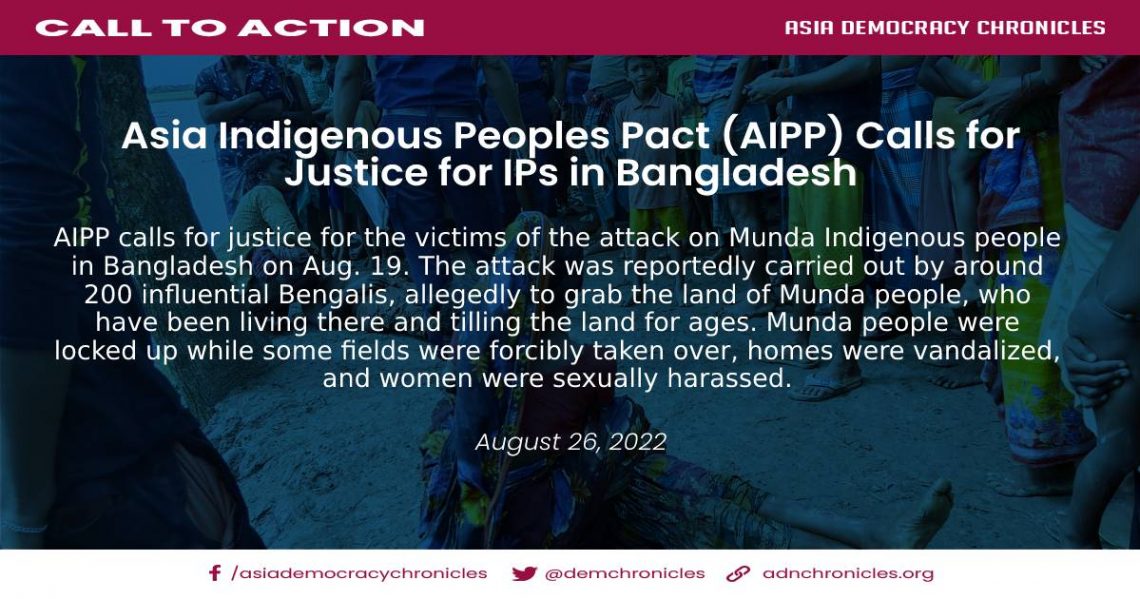 The Asia Indigenous Peoples Pact (AIPP) vehemently condemn the motivated and organised attack on Munda Indigenous People in Bangladesh on 19th August 2022. This kind of heinous crime has no place in a civilized society and cannot be condoned and the perpetrators must be brought to justice immediately.

It is reported that local land grabbers (numbering around 200) attacked the Munda Indigenous People in Dhumghat Antikhali village, Shyamnagar sub-district, Sathkhira district, which is in the southern part of Bangladesh. It is learnt that the land grabbers were led by Rashidul Islam Sardar and Ebadul Islam Sardar. In the incident, 12 Munda people were injured and one of the victims, Narendra Munda (65-year-old male), succumbed to injury the next day at Satkhira Medical College Hospital. The attack was reportedly carried out by local influential Bengali people with the motive to grab the land of Munda people who have been living there and tilling the land for ages.

The miscreants allegedly locked up some of the villagers in their houses and attacked the people working in the field and forcibly took over their lands and started cultivating. The perpetrators also vandalized the houses of the Munda families and sexually harassed the women (as alleged by the communities). Out of those injured, Narendra Munda (65-year-old male) and Sulata Rani Munda (35-year-old female), Bilashi Rani Munda (37-year-old female), and Rani Munda, (35-year-old female) sustained serious injuries and were hospitalized at Shyamnagar Upazilla Health Complex. Indigenous Peoples of that region are in a state of shock and living under constant fear. It is learnt that the perpetrators are still intimidating the local Munda people.

AIPP stands with all civil society and particularly the Munda Indigenous people in demanding justice for the victims. We stand with the community in demanding impartial and prompt investigation by an independent body to the incident and perpetrators be brought to justice at the earliest. We also demand to the Government of Bangladesh to ensure the safety and security of local Indigenous Peoples in Satkhira and robust mechanisms be put in place to recognize and secure their land rights.