Thousands of poor students and parents who flocked the Department of Social Welfare and Development local headquarters walked back home empty-handed and disappointed.

byBulatlat
in Statements
Reading Time: 3 mins read
A A
0 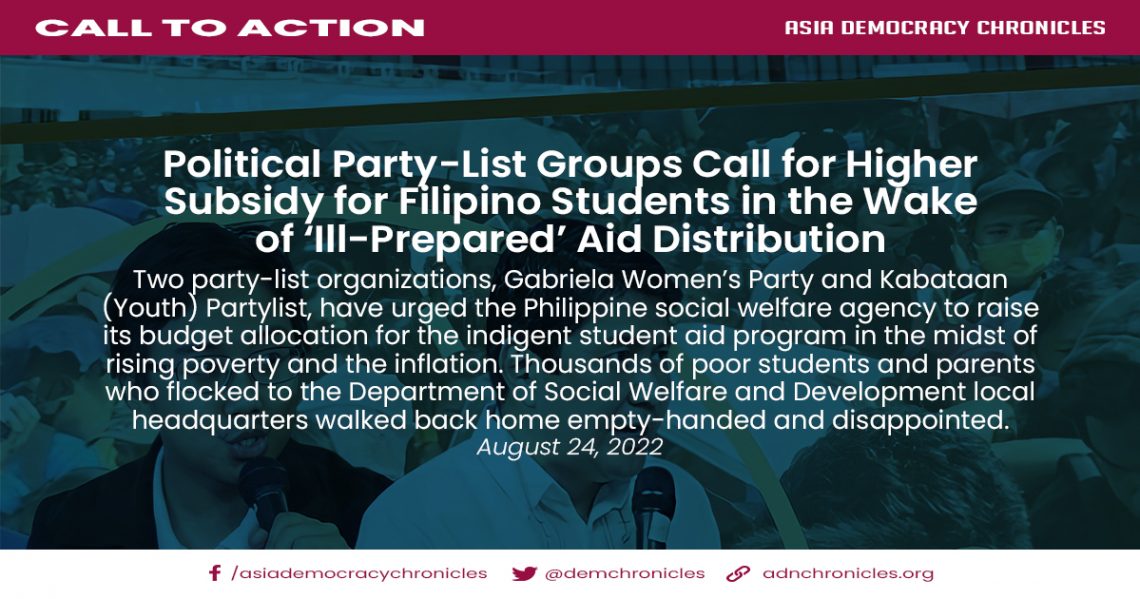 MANILA – “I wanted to spare my wife and children from this too pitiful condition just because we are poor. We were discouraged from joining the queue and availing what could have been rightfully ours even if we really need the assistance from the government,” said Rico, not his real name, a tricycle driver plying the route of Bagong Silangan to Sandigan.

Rico, 34, has two children who are both in school this year. The eldest is in senior high and the youngest is in elementary. Had they decided to take avail the aid, they would have been qualified to receive P4,000 ($71).

“Many of them have been queueing since last night, some slept in their line, and to think that the DSWD will still open at 8:00 and many of them will surely be denied of the aid because they lack documents,” he told Bulatlat as his tricycle passes the thousands of students and parents queueing at the national office of the Department of Social Welfare and Development (DSWD) in Batasan Hills, Quezon City.

“Our situation is already dire, and this kind of system that the government is implementing robs us of the little dignity left to us,” he said.

Kabataan Partylist Rep. Raoul Manuel described this incident as an “ill-prepared” aid distribution and with this, progressive groups reiterated their call for a higher subsidy for Filipino students.

“The long lines indicate the need for greater financial support for the education of the Filipino youth,” said Rep. Manuel in a statement, adding that the continuing price hikes have worsened the economic situation of millions of Filipino families.

Last Saturday, August 20, thousands flocked the national and regional offices of the DSWD over its supposed distribution of student aid, two days before the resumption of face-to-face classes. The project is pegged at P500 million ($8.9 million), with aid for indigent students ranging from P1,000 ($18) to P4,000 ($71).

Social welfare secretary Erwin Tulfo apologised for the chaotic distribution, saying that “we did not say we will give everyone cash aid within today.”

As if the desperate experience of the young people trying to receive aid was not enough, on Monday, Sec. Tulfo asked beneficiaries of the government’s Pantawid Pamilyang Pilipino Program who were able to receive the aid to “refund” it, saying that they are not eligible for the present student aid.

“The DSWD should be informed of the conditions of the people. The problem is that they really do not want to act on it. If they decide to lift a finger, it is either too slow or too little. We all have seen this during the height of the pandemic and every time there is a calamity,” said Mimi Doringo of urban poor group Kadamay.

Rep. Manuel, however, said that while the said program is only for students and parents in “crisis situations,” the turnout outside the DSWD offices proved that “almost all students need aid.”

Ibon Foundation, an independent think tank, said the aid distribution that has left at least 29 parents and students hurt will not even reach just one-percent of the country’s student population.

Part of the reason the government is giving so little help, the think tank said, is that “official statistics make them only see so little needing help,” leaving government data so disconnected from the harsh realities that ordinary folk are experiencing.

In a recent report, the Philippine Statistics Authority reported that poverty incidence has increased from 16.7 percent in 2018 to 18.1 percent in 2021. This translates to only about 20 million families living below the government’s monthly poverty threshold of P12,030 ($214).

“But is this really just how many poor Filipinos there are? Is having Php12,030 enough to ensure that the family can afford all the essentials of life?” Ibon Foundation asked.

The group said the poverty line is low because the subsistence threshold is so low to begin with, including a minimalist nutrition needs that cost too low and had too little variety.

Contributing to their dire conditions is a country average of 4.7 percent tuition increase and the 10.6 percent school fee increase in the past year alone, said Rep. Manuel.

“Student aid is essential. The chaotic and long lines at the DSWD are not a proof of the laziness of Filipinos, but of the government’s lack of preparation for back-to-school classes,” Rep. Manuel added.

Gabriela Women’s Party Representative Arlene Brosas also called on the social welfare agency to raise allocation to its indigent student aid program as Filipinos were already plunged in a massive poverty and inflation crisis, saying that the current aid is “not enough to cover the basic needs for going back to school.”

Tulfo, for his part, said they called on the Department of the Interior and Local Government (DILG) to assist for more decentralized distribution of the financial program, which will resume in the next five Saturdays: August 27, September 3, 10, 17, and 24.

A maximum of three students per family may apply. (JJE, RTS) #

Government and Opposition Must Focus on Flood Impact, Climate Justice

Government and Opposition Must Focus on Flood Impact, Climate Justice