Deplorable Use of Violence and Detention of Journalists, Activists at Phnom Tamao 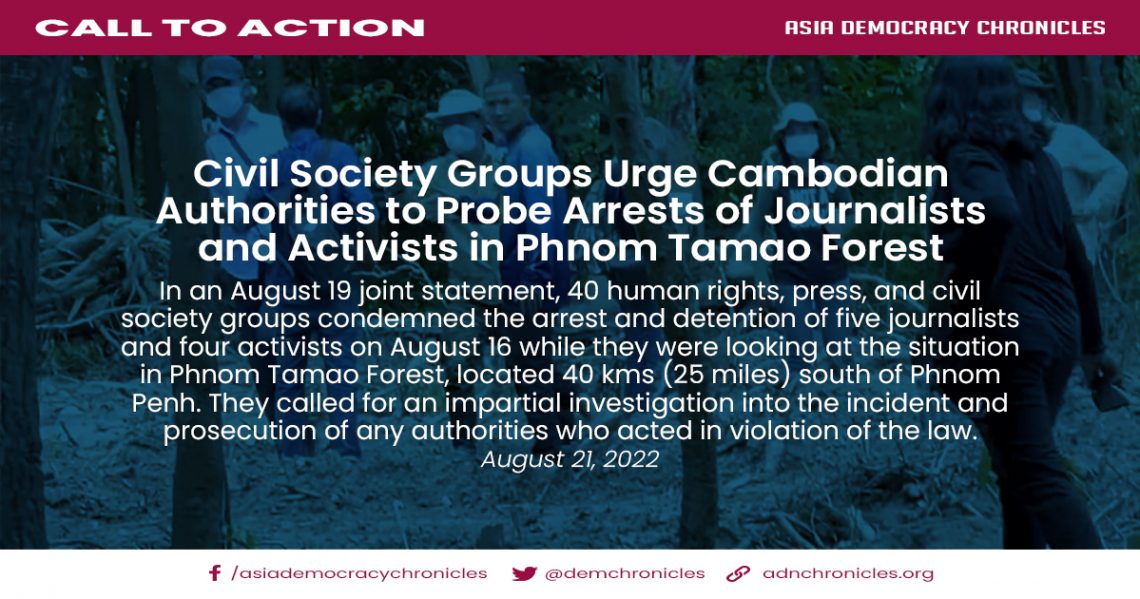 Five journalists from independent news outlet VOD and four activists from social justice group Khmer Thavrak were unjustly detained for about seven hours on 16 August 2022. They were arrested in Phnom Tamao forest on Tuesday morning by BHQ officers and then brought to the Bati district police station in Takeo province.

Authorities told VOD journalists they were not permitted to photograph, film or fly a drone in Phnom Tamao, claiming photos and recordings could be used to spread false information. There is no justification for such a claim, and we reject such arbitrary restrictions on journalists.

We also condemn the authorities’ unconscionable abuse of power and use of physical violence against a journalist and an activist, and call for an impartial investigation into the incident, prosecution of any authorities who acted in violation of the law, and justice for the victims.

A VOD videographer was slapped in the face by a BHQ officer when the journalist refused to hand over the phone he was using to record officers questioning his VOD colleagues.

“I was walking to the pagoda [in Phnom Tamao forest] and was told that VOD reporters were detained. I returned to them and took out my phone intending to film them for documentation. One bodyguard came up to me, told me not to film and wanted to take my phone from me, but I refused. He slapped me in the face and snatched the phone from my hand,” said Hy Chhay, the videographer.

Khmer Thavrak activist Hun Vannak was also hit repeatedly by a BHQ officer while being pushed into the back of a truck during his arrest.

“I refused to get into the [vehicle] and he punched me in the face three times and jumped to kick my head,” Vannak said after his release.

While authorities claimed on 16 August that the nine had entered a prohibited area in Phnom Tamao forest —which earlier this month saw approximately a quarter of its territory cleared of trees — journalists and others in recent weeks were freely able to report on, photograph and film the deforestation, replanting and other developments in the forest. These restrictions were sudden, arbitrary and infringed on press freedom.

In addition, the five journalists and four Khmer Thavrak activists, including Vannak, Sokun Tola, Chhem Sreykea and Chhoeun Daravy, were only released from detention on Tuesday evening after authorities required them to sign a “contract”. The contract stated that the journalists flew a drone without permission from authorities, despite no known existing regulations on using drones in that area. We view this as coercion, harassment and intimidation.

Independent journalists’ right to report news freely in Cambodia must be protected, especially when reporting on matters of the public interest such as the recent massive deforestation of Phnom Tamao forest. Cambodia’s 1995 Press Law prohibits pre-publication censorship like what was exhibited on 16 August, when authorities told journalists they were not allowed to photograph or film in the forest without prior approval, and when officers confiscated their equipment, including phones, cameras and a drone equipped with a camera.

Similarly, individuals and activists have the right to freely document and monitor environmental destruction and rights abuses, and to express their opinions publicly, a right protected by Cambodia’s Constitution and international human rights law.

We stand in solidarity with our colleagues working in the independent news media and as human rights defenders against state violence, arbitrary detention, harassment and intimidation. We call on the Cambodian authorities to uphold the Press Law, Constitution and all national and international laws which ensure the rights of freedom of expression, and of all journalists and human rights defenders to document and publicise actions by the state, and to serve society.

The violence and detentions of five VOD journalists and four activists from Khmer Thavrak on 16 August 2022 came just days after the Phnom Tamao forest underwent massive deforestation, losing around 500 hectares of forest at the roughly 2,000-hectare site in about one week. Prime Minister Hun Sen ordered the forest to be replanted on 7 August, cancelling concessions given by his government to several businessmen, including Leng Navatra and Khun Sea. The reversal came after a series of VOD articles featuring photos and drone footage of the rapid deforestation, other news articles and drone footage of the clearing, and public outrage on social media over the forest’s destruction.

The five VOD journalists detained on Tuesday were following up on their earlier reporting on the forest clearing, including conducting interviews and photographing and filming using a drone.

The Khmer Thavrak activists were detained after one group member was live-streaming on Facebook from Phnom Tamao, and the group had submitted a petition about the forest to the Takeo Provincial Department of Agriculture, Forestry and Fisheries. Authorities had reportedly started marking forest land, drawing questions from local residents and triggering a visit by Khmer Thavrak.

Prime Minister Hun Sen announced late Tuesday that his bodyguard unit was now responsible for removing felled timber, preparing the land and replanting trees in Phnom Tamao, after his government earlier authorised the privatisation and clearing of parts of the forest. Hun Sen also instructed the Ministry of Agriculture to reestablish Phnom Tamao as a protected forest area.

This joint statement is endorsed by:

Why not remove the cap on lending interest rate?

Why not remove the cap on lending interest rate?