On 9 August, the Philippines’ Office of the Ombudsman rejected the bribery complaints against prisoner of conscience and former Senator Leila de Lima, citing inconsistencies in witnesses’ testimonies. This dismissal – which comes months after several witnesses retracted their allegations against Leila in relation to her drug-related charges – adds to growing proof of concerted efforts to persecute her and fabricate evidence against her. We call on the government to urgently and impartially review her remaining charges, with a view to dropping these and ensuring her immediate release. 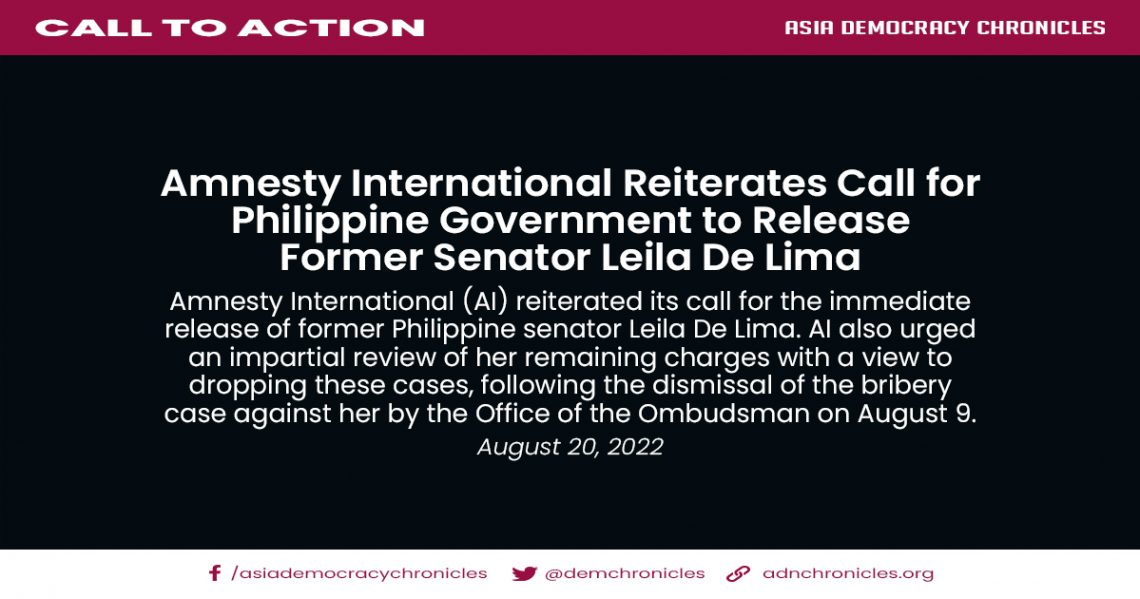 On 9 August, the Philippines’ Office of the Ombudsman rejected the bribery complaints against prisoner of conscience and former Senator Leila de Lima, citing inconsistencies in witnesses’ testimonies. This dismissal – which comes months after several witnesses retracted their allegations against Leila in relation to her drug-related charges – adds to growing proof of concerted efforts to persecute her and fabricate evidence against her. We call on the government to urgently and impartially review her remaining charges, with a view to dropping these and ensuring her immediate release.

TAKE ACTION: WRITE AN APPEAL IN YOUR OWN WORDS OR USE THIS MODEL LETTER

Following the 9 August 2022 dismissal of the bribery complaints against prisoner of conscience and former senator Leila de Lima by the Office of the Ombudsman, I write to urge your office to impartially and expeditiously review the two remaining charges against her, with a view to dropping these and ensuring her immediate and unconditional release. With the earlier retractions by several witnesses of their allegations against her, this dismissal further strengthens the view that the charges she continues to face are false and politically motivated. I call on you to finally put an end to this gross injustice against Leila.

I welcomed your statement in May 2022 that you were willing to review the drug-related charges against Leila, and that it is “possible” to drop these charges after several witnesses recanted their testimonies Following these retractions, the Ombudsman has now highlighted inconsistencies in witnesses’ testimonies alleging that she received money from a self-confessed drug trader in exchange for protection. While this dismissal of the bribery charges against her is a positive sign, it is also further proof of concerted efforts to fabricate evidence against Leila and persecute her.

The continued detention of Leila clearly violates her right to presumption of innocence and other fair trial guarantees. For over five years, she has been a victim of vicious attacks and political persecution for her human rights work. She should not have been detained in the first place, but her immediate release is the least that the Philippine government could do to correct this grave injustice and demonstrate that it is serious about restoring respect for human rights under the new administration.

I, therefore, call on your office to:

1. Drop all charges against Leila now and ensure her immediate and unconditional release;

2. Conduct thorough, independent and impartial investigations into those responsible for her  arbitrary detention and ensure full accountability for the years of human rights violations she has had to endure; and

3. Promptly and thoroughly investigate allegations by witnesses that they were coerced by senior officials to commit perjury, while ensuring their safety and security in light of the gravity of such allegations and the possible involvement of high-level officials.

Prisoner of conscience and former Senator Leila de Lima, who has been detained at the headquarters of the
Philippine National Police (PNP) since her arrest on 24 February 2017, was one of the staunchest critics of the
human rights violations under the administration of President Duterte. In the last five years since Leila’s arrest,
Amnesty International has repeatedly said that the charges against her were fabricated, and that the supposed
testimony by witnesses against her was manufactured.

In its dismissal, on 9 August 2022 of the 2018 direct and indirect bribery complaints against Leila and her former
aide Ronnie Dayan – filed by a special team within the Philippines’ Office of the Ombudsman – the Ombudsman
itself highlighted inconsistencies in witnesses’ testimonies on how the alleged bribe money was delivered to Leila,
including the tranches of delivery and whether or not she personally received the money. The complaints – which are separate from the drug-related charges for which Leila is on trial and in detention for five years now – stem from the allegation that she and Dayan received money from former state witness and self-proclaimed drug trader Kerwin Espinosa, in exchange for the protection of his illegal activities, Prior to this, in April 2022, Espinosa recanted his previous testimony where he claimed that he gave a total of P8 million (about USD $152,000) in drug payoffs to Leila when she was Justice Secretary, through Dayan. At a 2016 Senate hearing, Espinosa alleged that Dayan called him in 2015 to solicit money as campaign funds for Leila, in exchange for protection given his own involvement in the illegal drug trade.

Rafael Ragos, a former acting chief of the Bureau of Corrections, also recanted his statements against Leila in April 2022 and said he was forced to “manufacture lies” by former Justice Secretary Vitaliano Aguirre and other senior officials. Ragos previously testified that in 2012, he delivered money from prisoners in New Bilibid Prison (NBP) to Leila’s residence on two occasions, while she was Secretary of Justice, for her bid to become Senator. Ragos was previously an accused alongside Leila and Dayan, but the charges against him were dropped after he agreed to act as a witness against her. Aguirre has since denied Ragos’s accusation.

On 13 May 2022, Dayan likewise recanted his testimony in 2016 that he collected drug money from Espinosa for
his then employer Leila when she was still the Justice secretary. A co-respondent in one of the two remaining cases against her, Dayan said former Oriental Mindoro Representative Rey Umali, who passed away in January 2021, coerced him to testify against Leila during the 2016 Congressional inquiries into the illegal drug trading in NBP. Before the start of the Marcos administration, Justice Secretary Jesus Crispin Remulla said that the dropping of the charges against Leila is possible, adding that retractions by witnesses are a “red flag” that valid concerns exist regarding the judicial process for Leila.

In July 2022, the Philippine National Bureau of Investigation (NBI) filed murder complaints against 22 police officers for the deaths of eight high-profile drug convicts inside the New Bilibid Prison from May to June 2020. Those who died included Jaybee Sebastian, a key witness in the charges against Leila. The NBI said the inmates were murdered, contrary to the Bureau of Corrections records that they died from Covid-19.

Leila’s arrest in 2017 came after she attempted to investigate abuses committed in the context of the so-called
“war on drugs”, which has resulted in the extrajudicial execution of thousands of suspected drug offenders and
other human rights violations, in what amount to crimes against humanity. As in the case of Leila, there has largely been no justice or accountability for the victims of these abuses and their families.

PREFERRED LANGUAGE TO ADDRESS TARGET: [English, Filipino]
You can also write in your own language.
PLEASE TAKE ACTION AS SOON AS POSSIBLE UNTIL: 13 October 2022
Please check with the Amnesty office in your country if you wish to send appeals after the deadline.