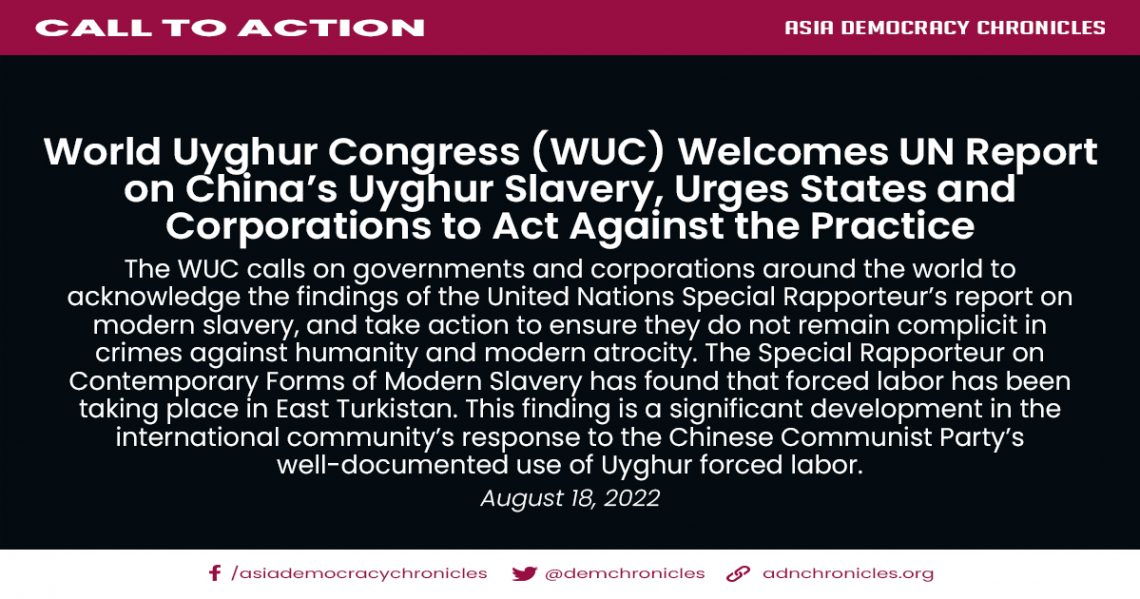 The World Uyghur Congress (WUC) welcomes the UN Special Rapporteur on Contemporary Forms of Modern Slavery’s report that “finds it reasonable to conclude” that forced labour has been taking place in East Turkistan. The report found that Uyghurs, Kazakhs and other Turkic groups have been subjected to repressive and abusive practices as part of Chinese state-mandated forced labour systems. The Special Rapporteur, Tomoya Obokata, further found that “the nature and extent of powers exercised” meant that “some instances may amount to enslavement as a crime against humanity.”

“The Special Rapporteur has concluded what those of us in the Uyghur advocacy movement have been saying for years,” WUC President Dolkun Isa said. “Forced labour programmes have been weaponised a tool of genocide by the Chinese Communist Party – and yet corporations around the world continue to turn a profit from atrocity, and governments refuse to legislate to put a stop to it. This report’s findings must be a wakeup call to those that have so far refused to take action on the proliferation of Uyghur forced labour made goods in global supply chains.”

This is a significant development in the international community’s response to the Chinese Communist Party’s well-documented use of Uyghur forced labour. Those implicated cannot feign ignorance when the world’s largest and most prolific intergovernmental organisation, the UN, has laid bare the extremities of the modern slavery in East Turkistan. The WUC calls on governments and corporations around the world to acknowledge the findings of the Special Rapporteur’s report, and take action to ensure they do not remain complicit in crimes against humanity and modern atrocity.

The Special Rapporteur’s findings today offer a glimpse of the human rights violations being perpetrated in East Turkistan. The WUC, once again, urges the UN High Commissioner for Human Rights, Michelle Bachelet, to release her full report into the human rights situation in the region immediately.#

Bhutan’s merchandise export falls by about 4.5 percent to Nu 8.62B