Hong Kong: RSF is Concerned by the Appointment of Another “Political Commissar” as the Head of Public Broadcaster RTHK

Reporters Without Borders (RSF) is concerned by the appointment of Eddie Cheung as the head of Radio Television Hong Kong (RTHK), the territory’s former representative to the European Union, who in his previous position was involved in a smear campaign against international media. 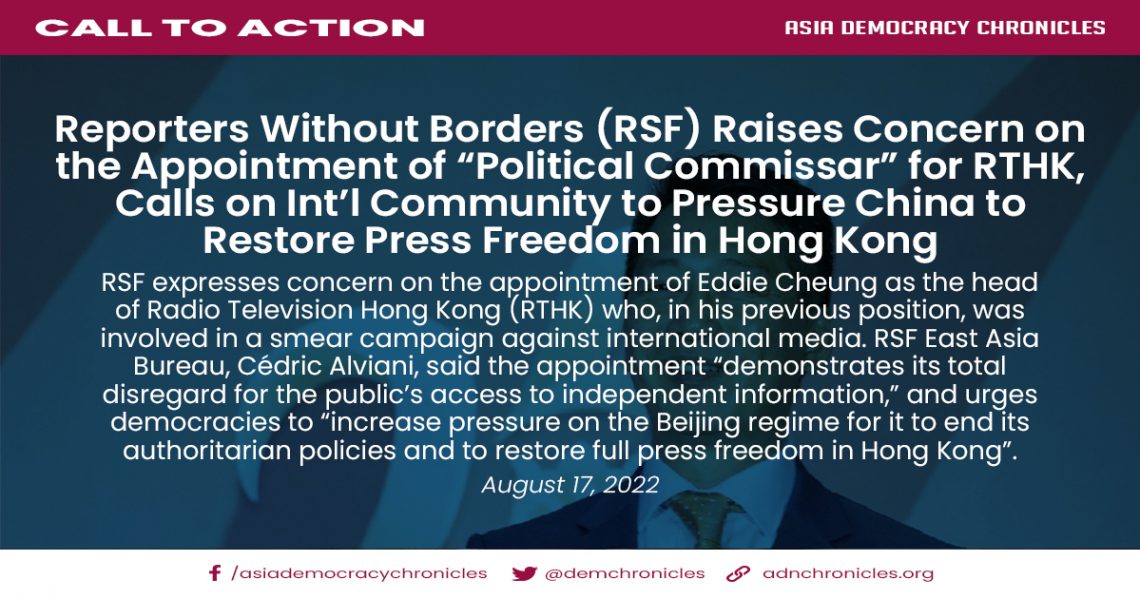 In July 2022, the Hong Kong government announced the departure of Radio Television Hong Kong (RTHK) Director of Broadcasting Patrick Li, an accomplished “political commissar” who censored hundreds of hours of content. But for the group’s journalists, the relief was short-lived: one month later, the government appointed Eddie Cheung, another bureaucrat without media experience and notorious, like his predecessor, for his unwavering pro-Beijing commitment.

Since 2019, Cheung has served as the Special Representative for Hong Kong Economic and Trade Affairs to the European Union, and according to RSF’s count, has signed at least 58 public letters in which he accused major European media outlets of “unfounded allegations” on Hong Kong policies.

“By appointing at the head of RTHK a bureaucrat who involved in a smear campaign against international media, the Hong Kong government once again demonstrates its total disregard for the public’s access to independent information”, says the head of RSF East Asia Bureau, Cédric Alviani, who urges democracies to “increase pressure on the Beijing regime for it to end its authoritarian policies and to restore full press freedom in Hong Kong”.

RTHK, previously renowned for its fearless investigations that did not spare the local government, has in recent years been the target of harassment and censorship. After the  appointment of Patrick Li, on 1st March 2021, numerous productions were pulled off air and hundreds of episodes were deleted from RTHK’s archives and social media.

In a report titled The Great Leap Backwards of Journalism in China, RSF revealed the system of censorship and information control established by the Chinese regime in Mainland China and Hong Kong and the global threat it poses to press freedom and democracy.

Hong Kong, once a bastion of press freedom, has plummeted from 80th last year to 148th in the 2022 RSF World Press Freedom Index. The People’s Republic of China, for its part, ranks 175th out of 180 countries and territories evaluated. #