Journalist Do Cong Duong Dies in Prison in Vietnam 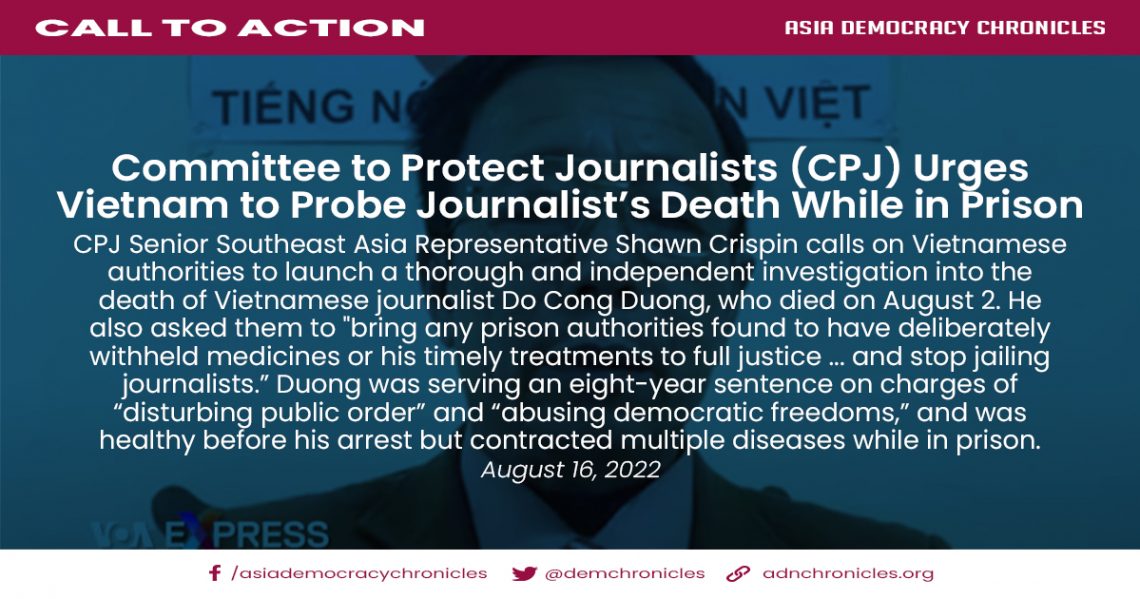 Bangkok, August 12, 2022 — In response to news reports that Vietnamese journalist Do Cong Duong, who was imprisoned on anti-state charges, died on August 2, the Committee to Protect Journalists issued the following statement:

Duong was healthy before his arrest but contracted multiple diseases while in prison, and authorities declined timely access to medical treatment, despite repeated requests from family, according to news reports. The journalist’s cause of death has not been released.

Duong was serving an eight-year sentence on charges of “disturbing public order” and “abusing democratic freedoms” in the Nghe An province Detention Center No. 6, according to a post by The 88 Project, an advocacy group that monitors the status of Vietnamese political prisoners.

He was detained on January 24, 2018, while filming and photographing state authorities evicting residents at the Tu Son commune in Bac Ninh province, according to news reports. Duong covered land rights and corruption on his “Tieng Dan TV” program, where he live-streamed video discussions on Facebook, according to The 88 Project.

CPJ emailed the Vietnamese Ministry of Public Security for comment on Duong’s death but did not receive any replies. CPJ was unable to find contact information for his family members.

Vietnam was the world’s fourth worst jailer of journalists, with at least 23 members of the press, including Duong, behind bars for their work at the time of CPJ’s 2021 prison census. #

Fed-up with waiting for authorities to act, Taman Melawis residents dig into own savings to secure homes from heavy rains