Instead of breaking the spirit of those against Myanmar’s junta, the sudden execution of four political prisoners seems to have strengthened the resolve of members of the country’s resistance movement to fight on.

f Myanmar’s military junta expected that executing four activists would instill fear among the people of the Southeast Asian nation and make them more pliant, it seems to have been proven wrong. In fact, the online Irrawaddy newspaper even calls the executions, which took place in late July, “yet another mistake” by junta leader Senior General Min Aung Hlaing.

The country’s armed ethnic groups denounced the executions almost immediately after the state-owned media confirmed on July 25, 2022 that they had been carried out. The ethnic armies also vowed to topple the junta. On the same day of the announcement, street protests broke out across Myanmar and many people changed their Facebook profile pictures to plain black as a sign of mourning and defiance.

For several days after, sporadic protests took place in Yangon and elsewhere, while police stations and buildings associated with the junta became targets for bombing. According to the People’s Defense Forces, it conducted revenge attacks on the junta forces and informants, killing some 20 junta personnel.

The military has since beefed up security, especially in Yangon. But many people are apparently hardpressed to contain their anger over the executions.

“It is unacceptable,” one young protester told Asia Democracy Chronicles. “It is against the law. They (Myanmar’s military) do whatever they want. They want to scare people, especially young people like us.”

“We are not afraid,” said the youth, who had joined one of the street protests organized shortly after the executions were announced. “We will continue to resist them. We will not back off. We will fight harder.”

The executions were the first to take place in Myanmar after more than three decades. But there are now worries that more executions will follow.

According to The Chindwin online publication, 41 prisoners have been separated from the rest in death row and moved to a different cell that can hold as much as 100 people. By the count of the Assistance Association for Political Prisoners (AAPP), at least 119 people — including the four who were recently executed — have been sentenced to death so far since the military coup in February 2021.  AAPP also said that as of  Aug. 4, 2022, 2,157 people have died due to “military crackdowns” against pro-democracy activists.

“They (the junta) want to show to the world that they have to carry out the execution because these people (supposedly) committed terrorism,” said Ko Harry, executive director of Assistance Association for Myanmar-based Independent Journalists (AAMIJ), a network of citizen journalists.  “It is hard to predict what they will do next. We don’t know how many more people they will kill. It is very dangerous.” 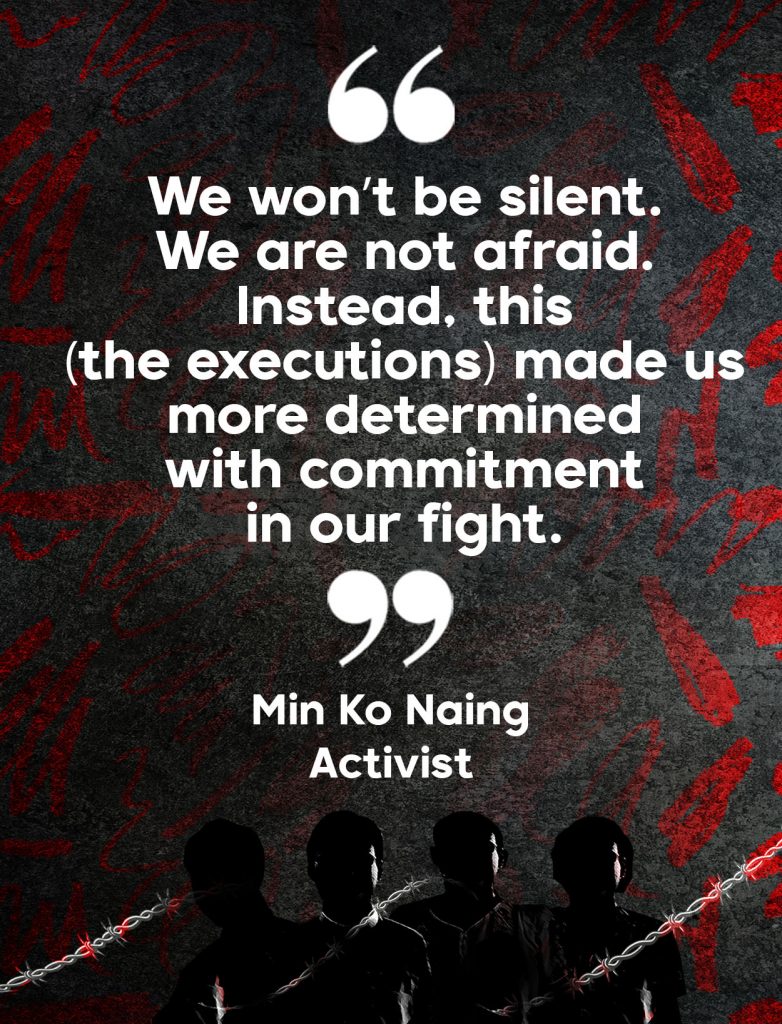 He said that the junta has been churning out laws, including the counter-terrorism act, aimed at those who oppose its rule.

Legal expert and political analyst U Aung Htoo meanwhile said that the four who were recently executed were not criminals but political activists who participated in the democracy movement.

“Execution is carried out in some countries only for extremely bad crimes nowadays,” U Aung Htoo told ADC. “Ko Jimmy and Ko Phyo Zeyar Thaw took part in politics. That is not a crime. The junta uses the legal system to commit murders. They just create fear to threaten people.”

But in a press conference held on July 26, the junta’s spokesperson Maj. Gen. Zaw Min Tun said that the four activists deserved to be hanged to death.

“The execution was conducted by the prison authority under the law,” he said. “We gave them all the rights as prisoners to defend their cases. But they were found guilty. They killed many innocent people and masterminded terrorism.”

“Relevant military tribunals charged the four activists under relevant sections of the Counter-terrorism Law and the Penal Code and handed down the death sentence to each of those four culprits,” the state-run Myanmar News Agency said. It added that the punishment had been conducted “in accordance with prison procedures.”

Yet, in a Facebook post, prominent Burmese activist Moe Thee Zone cited prison sources in asserting that the four men had been treated in a brutal manner during their last hours.

“Jimmy was still alive even though he had been hanging for 12 minutes,” wrote Moe Thee Zone in his post. “He was still breathing. They (prison authorities) took him from the gallows and beat him to death. They also dragged Ko Zeyar Thaw, who was not able to walk to the gallows.”

According to independent media outlet Myanmar Now,  Lt. Gen Soe Htut, who is the Home Affairs minister, supervised the executions.

Not one of the men’s families was able to retrieve the body or ashes of their loved one afterward.

The Irrawaddy has noted that prison procedures allow families of those executed to have their bodies back. “(Only) if relatives or friends of the executed prisoner do not ask for the corpse should prison authorities carry out the funeral,” it said.

The families were also not informed that the men were soon to be executed. But at least three of the political prisoners were able to see a family member days before they were hanged, albeit only through video conferencing.

Dr. Khin Win May, the mother of Phyo Zeyar Thaw, told the BBC Burmese Service that he had asked her to bring him a dictionary once she is able to visit him physically.

“I didn’t know that he will be hanged,” she said. “They (prison authorities) probably didn’t want us to know because they thought we will be sad if we knew about it. But I’m proud of my son. He even gave his life. If possible, I want his corpse and build a mausoleum for him to honor him as a martyr.”

Another well-known activist, Min Ko Naing, has urged democracy supporters in Myanmar to stand firm and has committed to fight on.

“As our revolution fight is getting intense, the other side will show brutality to scare us,” he said in a video he posted on Facebook. “We will show our countrymen and the world that we won’t be silent. We are not afraid. Instead, this (the executions) made us more determined with commitment in our fight.”

A friend of Ko Jimmy, Min Ko Naing also urged people to contribute to the democracy movement in whatever way they can, including boycotting products of businesses linked to the junta, taking part in protests, documenting anti-regime activities, donating to the armed resistance against the regime — even banging pots, pans, and honking car horns to show their opposition to the junta.

At least three armed ethnic groups — the Myanmar National Democratic Alliance Army (also known as Kokang Army), Ta’aung National Liberated Army, and Arakan Army based in northern Burma — have warned the junta that the executions would only intensify the civil war.

“The junta has to take responsibility for its actions,” the three groups said in a joint statement released on July 29.

Other armed groups such as Karen National Union (KNU), Karenni National Progressive Party (KNPP), Chin National Front (CNF), and All Burma Students’ Democratic Front (ABSDF) also released a statement along with the exiled National Unity Government (NUG), condemning the executions as terrorism and vowing to fight against the military by all means possible.

KNU spokesperson Padoh Saw Taw Nee also said that the execution of the four activists was just one of the many atrocities committed by the military. He said that all of these only make the anti-junta groups more committed to fighting against the dictatorship.

“We tried to engage (with the military) constructively,” said Saw Taw Nee. “But it doesn’t work. It is clearer now. So, we will work together with young people and gear up the armed resistance. We should apply both armed resistance and diplomatic pressure on the military junta.”

“Election is the only way to make themselves become the legitimate government,” he continued. “We will not let them make the election happen. We can’t only talk. We will act. We will firmly oppose its rule.”

From black to red

In an emergency speech on July 28, NUG Acting President Duwa Lashi La called on the international community to provide weapons, technological assistance, and financial aid to the armed resistance forces.

NUG Human Rights Minister U Aung Myo Min, for his part, called the executions as crimes against humanity and “murders in prison.”

“We will inform international communities that the military council committed just another form of crime,” he said. “The current effort by the international community is not enough. We will tell them that more concrete and effective actions should be taken against the regime. Condemning the junta is not enough. We need to give all kinds of pressure on the military council to stop committing such crimes immediately.”

Ko Jimmy’s wife Nilar Thein said that foreign diplomats have contacted her and told her that they are working on what they can do for the Burmese democracy movement.

Echoing other activists in calling the executions as “murders,” she said, “The military council has shown that they don’t care (about) anyone. They will do whatever they want. … (But) they will bear responsibility for what they did.”

Nilar Thein also said that instead of black, people should change their Facebook profile pictures into red, indicating bravery.

“We all must be brave,” said the 88 Generation activist who was herself once a political prisoner. “I want all to move forward and keep in mind that it is our last fight to completely topple the dictators. We will definitely win this fight. We should not feel sad, cry, and stop. We must fight harder to eliminate the dictatorship.” ●

Journalist Do Cong Duong Dies in Prison in Vietnam