Established foreign caregivers said their contributions to Taiwan are being diminished by being paid NT$3,000 less than those with new contracts

byTaipei Times
in Statements
Reading Time: 3 mins read
A A
0 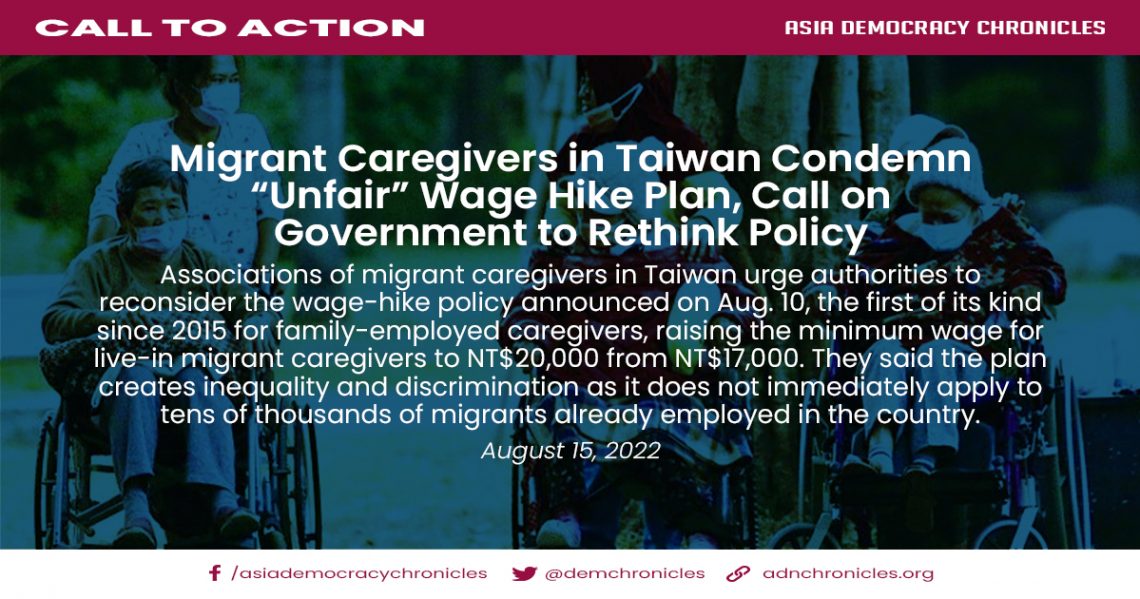 A new wage-hike policy does not immediately apply to tens of thousands of migrants already employed in the country and would lead to inequality, live-in migrant caregivers and domestic helpers in Taiwan have said, criticizing a policy the government introduced on Wednesday.

The wage increase announced on Wednesday, the first of its kind since 2015 for family-employed caregivers, raises the minimum wage for live-in migrant caregivers to NT$20,000 from NT$17,000.

The new minimum wage remains NT$5,250 lower than the standard minimum wage, as live-in caregivers are not covered by the Labor Standards Act (勞動基準法), a sticking point among many foreign workers affected by the policy.

However, a particular concern is that the change only applies to newly arrived migrant workers and to terms of new contracts, but does not affect workers with existing contracts.

Indonesian caregiver Fajar, president of the Indonesian workers’ solidarity organization Ganas Community, said that the Ministry of Labor did not learn from its previous handling of a minimum wage increase in 2015 that also only applied to new contracts, and raised the same objections.

“I’m not surprised something like this happened again. The ministry should have learned from previous incidents where there was much dissatisfaction from workers who had been in Taiwan for a long time with no increase in salary,” Fajar said.

It is not easy or practical for migrant workers to change employers to benefit from the change, she said.

Even if the ministry advised or encouraged employers to raise wages, it would not be mandatory, and most would not follow such direction, Fajar said.

Expecting workers to negotiate a raise with their employers, either through their manpower agency or on their own, would be “very unfair because if the employer does not agree, there will be conflict.”

One of the workers who is not eligible for the raise is Pingtung-based Indonesian domestic helper Ema, who said that people such as her work tirelessly for their employers, but are given “empty hope” in return.

“A very unreasonable policy. We who are still working here are considered to have no contribution,” Ema said.

She had asked her employer for a raise earlier this year because of inflation and other issues, but said she was told she would be paid according to the law.

Marie Yang, an advocate for migrant workers in Taiwan’s Filipino community, said she has received many complaints about the new policy.

“The old workers [those who have been in Taiwan for a while] felt disappointed because they are doing the same job, so why are new hires getting a higher salary? This is unfair,” Yang said.

“The government should start giving it a thought — seriously. The wage disparity is causing division and discrimination among the workers,” she said.

Beverly Gabredo, a Filipino caregiver who has worked for eight years for the same Taichung employer, said she was disappointed with the inequality the new wage creates, because newly contracted workers will earn more than many experienced workers.

“I think this law is unfair, because we are doing the same job as the new hires,” Gabredo said. “NT$3,000 is a lot of money that could help our families back home.”

Paul Su (蘇裕國), head of the Workforce Development Agency’s Cross-Border Workforce Management Division at the labor ministry, said the policy is not being applied across the board because the validity of existing contracts needs to be respected.

“We had to take into consideration the cost to employers and the rights of workers,” Su said.

The ministry estimated that of the 170,000 live-in migrant caregivers and domestic helpers with work permits in Taiwan, about 96,000 — new workers and those winding down existing contracts — will be eligible for the new minimum wage within four months, he said.

However, if employers of migrant caregivers on existing contracts agree to raise salaries, they can apply to the ministry by Dec. 31 for a monthly subsidy of NT$1,500 for up to four months, he added. #

Preparing to prepare for monkeypox

Preparing to prepare for monkeypox