The World Uyghur Congress joins 55 organisations in a letter to US Treasury Secretary Yellen and Secretary of State Blinken urging the US government to immediately impose Magnitsky sanctions on the Chinese government officials implicated by the Xinjiang Police Files. 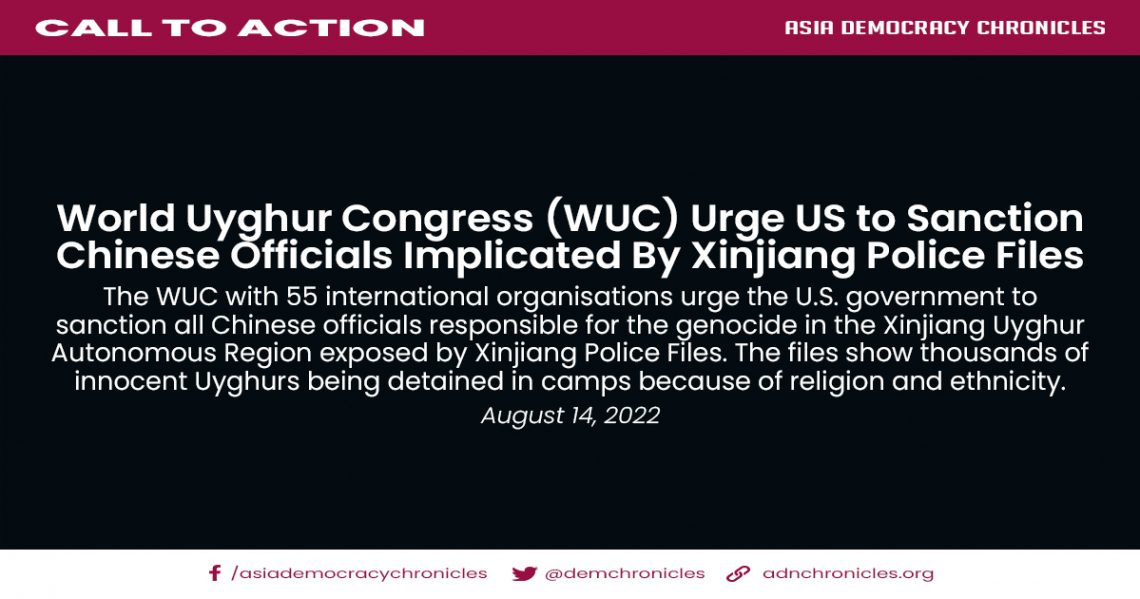 The World Uyghur Congress joins 55 organisations in a letter to US Treasury Secretary Yellen and Secretary of State Blinken urging the US government to immediately impose Magnitsky sanctions on the Chinese government officials implicated by the Xinjiang Police Files.

We, the 56 undersigned organizations dedicated to human rights in China and to the plight of persecuted ethno-religious groups in the Uyghur Region, urge you to sanction all Chinese officials responsible for the genocide in the Xinjiang Uyghur Autonomous Region (XUAR), also known as East Turkistan. Such sanctions are required by law under Section 6 Iof the Uyghur Human Rights Policy Act of 2020 (P.L.116-145).

On May 24, the Victims of Communism Memorial Foundation released the Xinjiang Police Files containing thousands of images of Uyghurs detained by XUAR authorities, detailed information about the security and operations of the internment camps, and incriminating speeches of Chinese Communist Party officials. The unprecedented materials were obtained from the largest and most significant leak of internal documents from Xinjiang police networks, consisting of tens of thousands of documents. The files were authenticated and analyzed by Dr. Adrian Zenz and a consortium of major global media outlets including the BBC, USA Today, Der Spiegel, Le Monde, and El Pais.

For the first time, the Xinjiang Police Files showed the world the faces of thousands of innocent Uyghurs, including women and children as young as 15 years old, who are being detained in brutal conditions because of their religion and ethnicity. The extensive photograph material, with over 7,000 images of camp activity, including police drills, weapons including machine guns and large clubs, 2,800+ images of detainees, proved that China’s so-called vocational training centers are in fact prisons. The files contained unusually candid speeches reflecting the intent of leading officials, including demands to treat persons from ethnic groups like dangerous criminals, to prevent any camp escapes, and to readily open fire to stop escapees and to secure the camps. The files show that Beijing considers “over two million” Uyghurs to be impacted by “extremist” religious thought, and how they are targeted for internment for ordinary, nonviolent behavior and cultural or religious expression.

The new evidence contained in the Xinjiang Police Files incriminates multiple Chinese government officials at the highest levels of the central government including:

The files contain constant references to General Secretary Xi himself, and shows his close interest and guiding role in the governance of Xinjiang. To date, only one central government official, former XUAR Party Secretary Chen Quanguo—who was appointed to the Politburo in 2017—has been sanctioned by the United States for their implication in the Xinjiang atrocity. The United States officially determined in 2021 that Beijing has committed genocide against the predominantly Muslim Uyghurs and other ethnic and religious groups in Xinjiang. Legislative bodies and leaders of several other governments including in Canada, the UK, the Netherlands, Belgium, France, Lithuania, the Czech Republic, Ireland, and Germany have made similar determinations. In March 2021, the United States, Canada, the United Kingdom, and the European Union imposed coordinated sanctions on Beijing officials responsible for the atrocity. These designations marked a significant step forward in terms of holding accountable the perpetrators of atrocities against the Uyghurs and other Turkic and Muslim-majority peoples. However, given the extensive evidence revealed by the Xinjiang Police Files, the United States must without further delay sanction the officials that the documents demonstrate to be responsible. We also note that the impact of such sanctions would be bolstered if coordinated and implemented in conjunction with U.S. allies.

We strongly urge appropriate sanctions against the Chinese officials implicated by the Xinjiang Police Files in the atrocity crimes against Uyghurs and other Muslim Turkic groups. In June 2022, the European Parliament passed by an overwhelming majority a resolution which urged “Member States and the Vice-President of the Commission/High Representative of the Union for Foreign Affairs and Security Policy to swiftly adopt additional sanctions targeting high-ranking Chinese officials, such as Chen Quanguo, Zhao Kezhi, Guo Shengkun and Hu Lianhe, as well as others identified in the Xinjiang police files, and other individuals and entities, who are involved in the systematic human rights violations in the Xinjiang Uyghur Autonomous Region.” The European Commission has proposed an import ban on all goods produced by forced labor including manufactured goods coming from the Uyghur Region.

As stated in the Biden Administration’s 2022 Strategy to Anticipate, Prevent, and Respond to Atrocities, atrocity prevention and the promotion of respect for human rights are central to U.S. national security. China will continue its atrocious abuse of human rights in Xinjiang until the free world pushes back. We must show those officials responsible for this atrocity that neither they nor their assets are welcome in the United States until these abuses cease. By imposing stringent sanctions under the Global Magnitsky Act, the United States can send a powerful message that the world will not stand by as Beijing commits atrocities in violation of the Genocide Convention of 1948.

New Report Reveals Unauthorised and Unsafe Use of Chlorpyrifos and Other Hazardous Pesticides in India, demands stringent action