Taiwanese pro-independence news outlet, Formosa Television (FTV) News, has been subject to cyber-attacks and disruptions from suspected Chinese hackers from August 6. The International Federation of Journalists (IFJ) condemns these attacks and calls for press freedom to be respected in Taiwan. 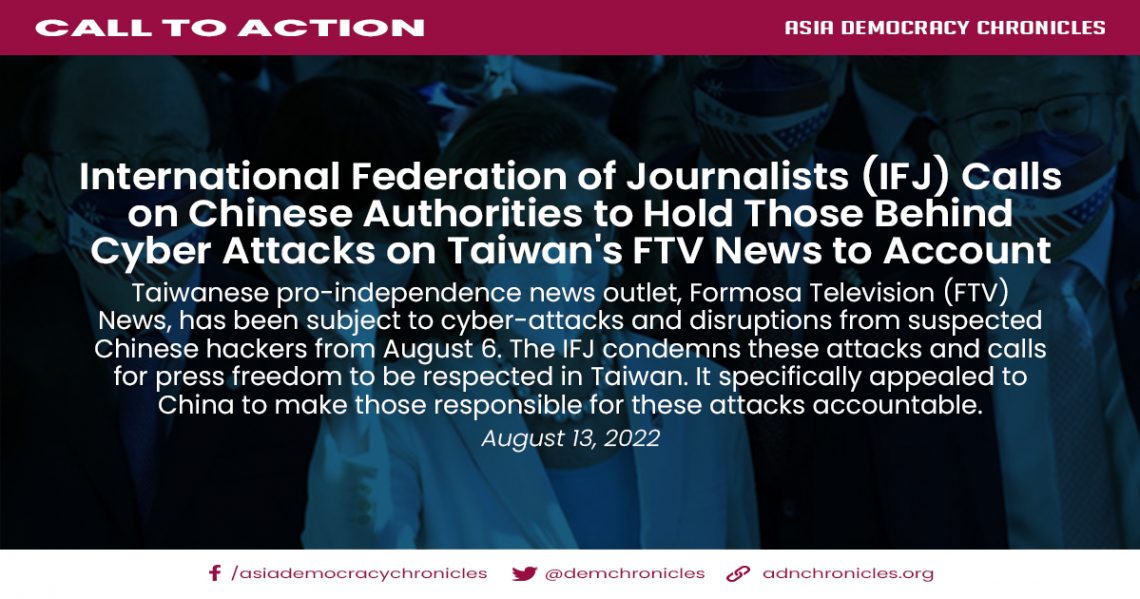 In the first incident on August 6, Chinese activist hackers displayed a series of messages expressing support for the unification of Taiwan with the People’s Republic of China. They replaced screens with a map of mainland China and Taiwan accompanied by the words, “China, not one bit less.”

Shortly after the attack, which lasted three minutes, FTV News confirmed that its YouTube broadcast had been hacked, although the television channel had not been affected.

From August 6 to August 10, FTV News was also subject to intermittent Direct Denial of Service (DDOS) attacks. A network spokesperson stated that FTV “have been handling cyberattacks that have happened recently to ensure the safety of our broadcast.”

The week prior, Taiwan’s 7/11 convenience stores were the subject of a cyber-attack, with in-store screens displaying the words “Warmonger Pelosi, get out of Taiwan!”. Taiwanese authorities are also reporting an unprecedented attack on government websites and infrastructure in the wake of United States House of Representatives Speaker Nancy Pelosi’s visit to Taiwan on August 4.

In the past week, there has also been a growing number of Chinese disinformation campaigns targeting Taiwan, which depict the US as an unreliable international partner, in an attempt to undermine relations between the US and Taiwan.

Nancy Pelosi was the highest-ranking US official to visit Taiwan in the last 25 years. On this visit, she expressed continuing political and security support for Taiwan, presented a message of cooperation and met with pro-democracy and human rights activists.

This diplomatic visit to Taiwan has triggered a significant backlash from China’s PRC government, with the Australian Broadcasting Company reporting the US ambassador in Beijing had been summoned in protest. Beijing has cut collaboration with Washington on several fronts, including combatting the ongoing climate crisis and has been performing significant military and naval drills around Taiwan.

The IFJ said: “Media organisations must be able to carry out their work without censorship or interference. The IFJ calls on the authorities in China to respect the right to a free press and to hold those responsible for the cyber-attacks on FTV News to account. The IFJ also urges the Taiwan government to further enhance its transparency to assist both citizens and news media in securing timely and accurate information and combatting misinformation.” #