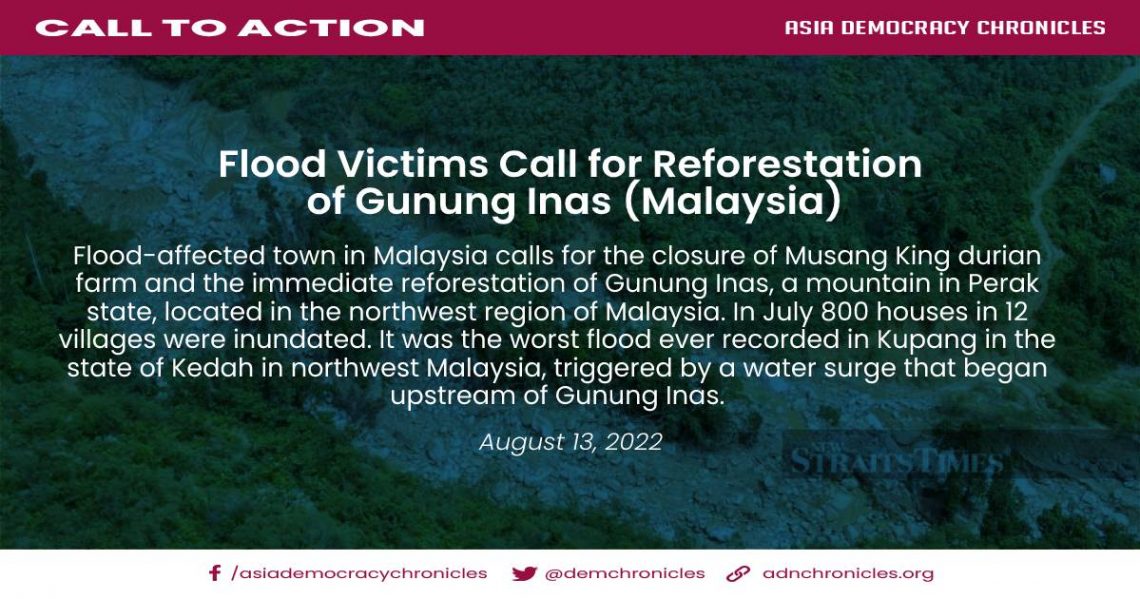 BALING: “You place a hen and its chicks on this floor and then you splash them with a drum of water. They will be washed away just like that, isn’t it?”

“Then you place the same hen and its chicks on the grass out there and splash them with the same amount of water from the drum.

“They will not be washed away like what has happened to them on the cemented floor because the soil and the grass will absorb and decelerate the strong currents. It is that simple!” said Abdul Wahab Samah, 64, before he broke into laughter.

The senior villager of Kampung Padang Empang, located adjacent to Kampung Iboi, the ground zero of July 4 floods disaster in the Kupang sub-district here may sound like he was joking, but he had a point there.

Abdul Wahab may not be a trained scientist or an environmentalist but he understands well how mother nature works, having been living at the foothill of the majestic Gunung Inas all his life.

He used the simple analogy to sum up the Sungai Kupang Debris Flood Geological Disaster Study Report announced by a special team formed to investigate the Baling flood tragedy.

“When absolute logging activities happened, the slopes were left bare. What do you think will happen when there is heavy rainfall?

“Of course it will create mud floods because the trees were no longer there to absorb and decelerate the strong currents, gushing down from the mountain.

“This is what we have been telling the authorities for over a decade ago, but it fell on deaf ears,” he said, lamenting the authorities’ inaction over the villagers’ objection against the Gunung Inas logging and forest farming activities since 2008.

On Friday, the Energy and Natural Resources Ministry secretary-general Datuk Rosli Isa was reported as saying that cascading geological processes – heavy rain, landslides, debris flows and floods as well as mud floods – had been identified as the main cause of the worst floods in Baling history.

He said the extreme rainfall was then followed by the formation of debris flows, debris floods and mud floods.

The task force had also discovered that the erosion that occurred in the secondary forest due to the conversion of land use to forest plantation since 2010 had also raised the erosion rate in hilly areas, resulting in siltation which caused the river to become shallow.

As such, Abdul Wahab said the findings were merely cementing the villagers’ criticism over the extensive logging in Gunung Inas.

Meanwhile, Kampung Iboi Village Development and Security Committee secretary Nor Mohamad Che Husain said the villagers felt that the special team should have carried out extensive probes on the logging and forest farming activities on Gunung Inas, especially the Musang King durian farm.

The floods victims have claimed that the burst reservoirs on a Musang King durian farm in Gunung Inas had caused the floods.

“We hope the authorities will conduct thorough investigation into the violation of forestry regulations following the total logging and Musang King farm activities.

“These findings were not up to our expectation, perhaps their focus were just on the geological aspect of the floods disaster, but not on other areas,” he said.

However, he said, the villagers wanted an immediate action from the state government and relevant authorities based on these findings.

“We still stand firm on our call for the Musang King to be shut down and the reforestation of Gunung Inas to be done immediately.

“The villagers’ are still traumatised by the tragedy and we are gravely worried that the incident may recur anytime soon if no swift mitigations are taken,” he said.

In the July 4 incident, more than 800 houses in 12 villages were inundated. It was the worst flood ever recorded in Kupang, triggered by a water surge that began upstream of Gunung Inas.

A woman, her 14-year-old son and her pregnant daughter-in-law were killed when their house in Kampung Iboi was swept away during the floods. #