Indigenous people, especially females, are vulnerable to several forms of violence in addition to being affected by land-related issues, a non-governmental organisation has alleged on the occasion of International Day of the World Indigenous Peoples. 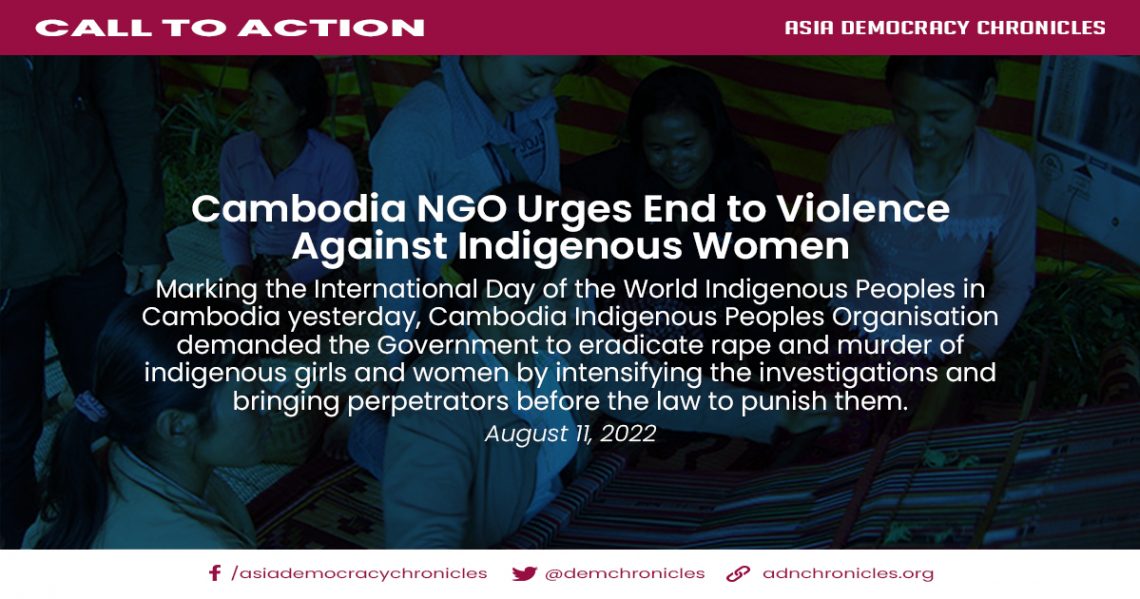 While marking the International Day of the World Indigenous Peoples in Cambodia yesterday, Cambodia Indigenous Peoples Organisation demanded the Government to eradicate rape and murder of indigenous girls and women by intensifying the investigations and bringing perpetrators before the law to punish them.

The NGO also presented reports on violence against indigenous women in three provinces in the event held under the theme ‘The Role of Indigenous Women in the Preservation and Transfer of Traditional Knowledge’.

Keo Savoeun, deputy governor of Stung Streng province and a female representative of the indigenous people, said, “Women’s decision-making power is necessary in dealing with trafficking of women and children, and to resolve land issues and manage natural resources. Elimination of discrimination against women is widely highlighted and the indigenous women have the same rights as men.”

However, indigenous women are seen as still facing violence and rape and that requires the attention of all the stakeholders concerned, from family to authorities in power, she added.

Bon Rachana, executive director of Women Rights Group Klahan, presented a research report showing that there has been an increase in cases of violence and rapes in indigenous communities since 2016.

According to the report published in 2022, out of 19 violence reported against indigenous women in their communities 18 cases were of domestic violence. Some of them lost their lives due to a lack of mental health support.

The victims of rape in their community are between 11 and 53 years old. The perpetrators of child and female rape are mostly relatives, neighbours and outsiders.

According to the report, “The root causes of violence and rape of children and women are the result of alcohol abuse and early marriage. Low levels of education are also a major cause.”

These are issues that indigenous peoples face at their local level, which requires governments and relevant institutions to work together to eliminate violence, intimidation and rape.

Sar Sineth, deputy director of Legal Protection Department at the Ministry of Women’s Affairs, said that the Ministry focuses on addressing issues of indigenous peoples based on the Neary Rattanak V strategy.

“Our strategy focuses on providing legal protection to the indigenous people. So, if indigenous people are discriminated against or involved in violence against children and women, we guarantee to provide them with legal assistance.”

“In addition, there is National Plan for the Prevention of Violence against Women and Girls to help them with,” she said. #

Those made jobless during pandemic among new groups of homeless people: Study