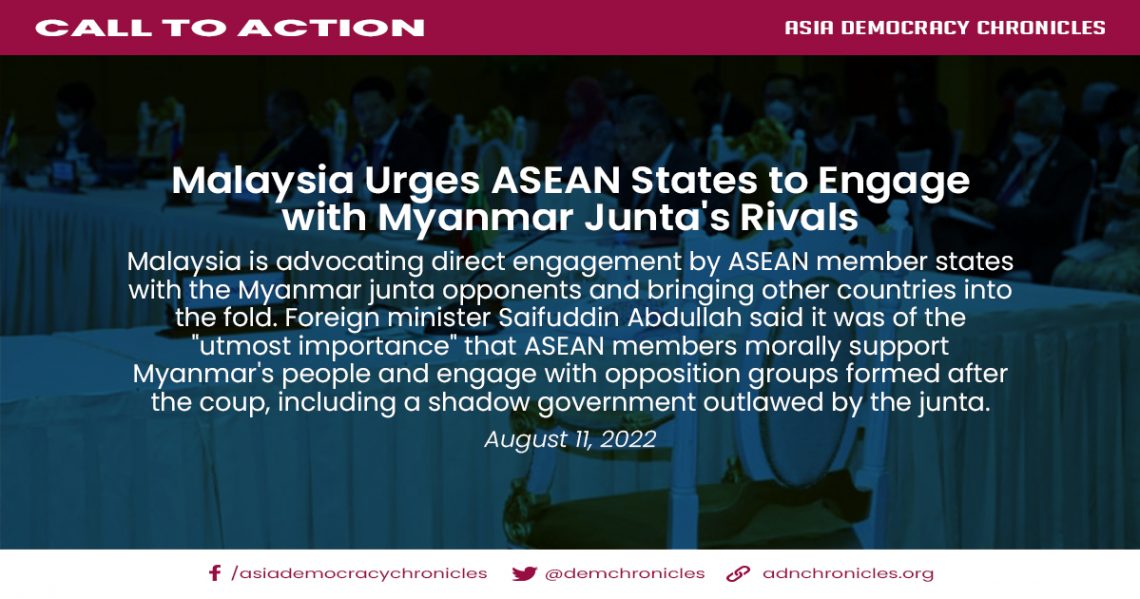 BANGKOK: Malaysia wants a clear endgame in Myanmar’s faltering peace process and is advocating direct engagement by Association of Southeast Asian Nations (ASEAN) states with the junta’s opponents, and bringing other countries into the fold, its foreign minister said on Wednesday (Aug 10).

Saifuddin Abdullah, whose candid remarks about the troubled peace process have angered the junta, also said that the ASEAN special Myanmar envoy should have a tenure longer than a year to be more effective.

Myanmar has been trapped in a spiral of violence since the military seized power last year and ended a decade of tentative democracy, triggering a backlash of protests, strikes and armed resistance that the generals have met with deadly force.

ASEAN countries, which have a code of non-interference in each member state’s affairs, are losing patience with the junta over its failure to follow a plan that includes multi-party dialogue, humanitarian aid access and a cessation of hostilities.

During a visit to Thailand, Saifuddin said that it was of the “utmost importance” that ASEAN members morally support Myanmar’s people and engage with opposition groups formed after the coup, including a shadow government outlawed by the junta.

“Now it is one-sided, we are only engaging the junta,” he told reporters.

Myanmar’s military has repeatedly urged ASEAN members not to contact groups that it calls “terrorists”.

The military has been deluged by international condemnation after it recently executed four political activists with ties to a resistance movement. It has defended the executions as lawful and necessary.

Saifuddin said that ASEAN foreign ministers discussed last week the possibility of seeking support from third party states to help with the ASEAN-led peace process, which is the only diplomatic process in play.

“Some of us brought it to the table that if ASEAN cannot do it alone then we will probably have to engage some of our ASEAN dialogue partners,” he said, without naming any countries. #