Tightening state controls and the pandemic are emptying the coffers of rights groups across Asia.

Chhay Krivan (not his real name) can still vividly recall how Cambodian authorities went about shutting down the human-rights organization that he worked for five years ago.

”The police officers, on orders from the local political leaders, destroyed our equipment before padlocking the premises with giant iron chains,” he said. “Then (they) forced us to line up for questioning, like we were criminals who broke the law.”

This was in 2017, when Prime Minister Hun Sen first ordered the closure of the Cambodian Center for Human Rights (CCHR), then the country’s leading human rights organization, alleging that it was foreign-funded and supported by Western countries and groups.

“After putting pressure on CCHR, the government also harassed and closed down all the other rights-based organizations, including ours,” said Chhay Krivan, who recalled that the government padlocked at least six organizations simultaneously during that time.

Since then he and his colleagues have attempted several times to revive their rights organization. But their efforts have gone nowhere because of the government’s restrictive laws directed toward non-government organizations (NGOs) and civil society organizations (CSOs) working on democracy and rights.

“We can reorganize but resources will be a question, especially from organizations outside Cambodia,” Chhay Krivan said. “This compounds our problem (aside from) state controls.”

It’s a problem that is confronting the rights CSOs and NGOs elsewhere in Asia, however. Indeed, the situation has gotten worse in the last two years as the COVID-19 pandemic not only gave many governments an excuse to clamp down on freedoms and rights, it also led to rights funding being diverted to medical and humanitarian emergencies.

More controls and a pandemic

Promoting human rights is fundamental and it comes naturally in a democracy, said Soo Suh, program manager of ADC’s parent organization Asia Democracy Network (ADN). But she noted that the onset of the pandemic caused funders to shift abruptly toward COVID-affected programs, and organizations not doing relief were the most affected.

“Many of our partners had to close shop,” said Suh of ADN, which has over 300 national and 10 regional members. “They would have been helpful in getting their governments to get supplies and people on the ground.”

Rosalia Sciortino, founder and executive director of the Bangkok-based SEA Junction, a center for Southeast Asian cultural learning and interaction, noted that the challenge for CSOs worsened as donors and funders invested in more urgent programs, and their commitments to NGOs remained unfulfilled. 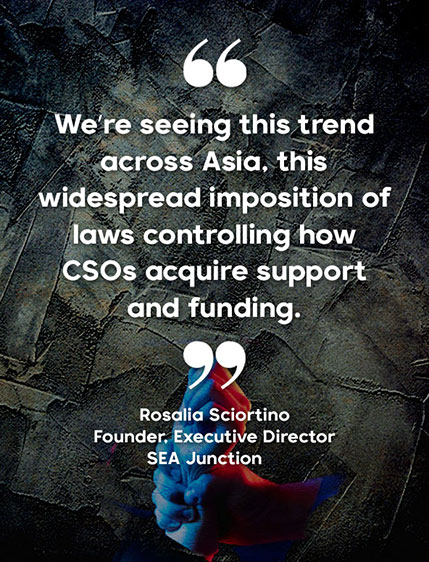 She also said that simultaneously, “we’re seeing this trend across Asia, this widespread imposition of laws controlling how CSOs acquire support and funding while at the same time reviewing past procedures and agreements that allow foreign donors and international NGOs (INGOs) to operate in their countries.”

In many countries, such laws were imposed even before the pandemic — as Sciortino herself pointed out in a 2018 paper on growing state control over civic space due to declining democracies. One example is Cambodia, where state constraints on organizations have emanated from the enforcement of the 2015 Law on Associations and NGOs (LANGO), which requires organizations to submit their extensive financial and administrative information to the government.

According to Ry Sovanna, policy, legal, and advocacy manager of the Cooperation Committee for Cambodia (CCC), funding for CSOs there have declined because of this law. He said that the law is challenging the civic space and democratic development in Cambodia and holds direct implications for the CSOs’ ability to comply and to act in advocating for human rights and promote transparency and accountability.

“There are increasing legal requirements and compliance with taxation, accounting, auditing, and reporting standards,” he added. “Donor-funding requirements are becoming increasingly more complex as donors and development partners want to see increasing value for their invested funds.”

As it is, he said, local NGOs have especially been affected, considering that they have a weaker capacity than INGOs to identify appropriate donors, communicate with them in English, and build trusting relationships.

Click to enlarge the graph.
Graph 1. A year-on-year comparison of official humanitarian needs and foreign funding in Asian NGOs reveals a significant disparity, particularly after 2020. According to estimates from the United Nations Office for the Coordination of Humanitarian Affairs, without intervention, this gap will only widen as the region faces more natural and political upheavals.
(Sources: Global Humanitarian Overview 2022, Doing Good Index 2022)

Turning off the foreign spigot

The situation in Cambodia under LANGO is similar to the Lao People’s Democratic Republic, said Sciortino in an online interview with ADC. Since 2017 in Laos, she said, a new law has required CSOs, foundations, and non-profit organizations to first obtain approval from the Ministry of Foreign Affairs before receiving funds from foreign entities for their operations.

“In Indonesia,” Sciortino also said, “the government is discussing the possibility of a law that will determine what kind of NGOs should be allowed to operate.”

She said that foreign funding for the rights of lesbian, gay, bisexual, and transgender (LGBT) persons in Indonesia has already gone down. LGBT rights grounds have also gone underground in the Muslim-majority country following objections by politicians and Islamist groups against the “Being LGBTI in Asia” initiative led by the United Nations Development Programme.

Scanning the Enabling Environment for Civil Society in Asia

Hover over the map to view country scores.
Graph 2. For CSOs to survive, they must be financially viable and operate within a robust economy. They must also have a supportive legal environment that provides ease of registration and fair application of laws on taxation, procurement, and regulation, among others. A five-year comparison (2017-2021) of changes in Asia’s enabling environment for CSOs reveals little to no progress. Alarmingly, working conditions for CSOs in Afghanistan, Cambodia, Sri Lanka, Nepal, and Burma have worsened. According to a recent factsheet from the CSO Sustainability Index, the Philippines, Bangladesh, Cambodia, Sri Lanka, and Thailand have experienced a downward trend since the pandemic. This graph shows how countries scored within a range of 0.2 to 0.5 (lowest to highest) to indicate CSO sustainability.
(Source: CSO Sustainability Index)

Meanwhile, in India, “the CSOs have faced numerous changes in regulatory framework during the last two years, and that includes taxation, foreign-funding restriction, and registration,” said Harsh Jaitli, chief executive officer of Voluntary Action Network India. “Currently, most of us are waiting to get our registration renewal from the government.”

India’s Foreign Contribution and Regulation Act of 2010 requires CSOs to register before accepting any foreign contributions, as well as to file tax returns that include charitable activities whether or not they received foreign funds. This law was amended to include the prohibition of sub-granting. After this amendment, the Ministry of Home Affairs in January 2021 further tightened the oversight of foreign funds received by NGOs and required banks to treat donations from any foreign source as foreign contributions.

Sciortino said that the effects of funders shifting or stopping support are now felt across Asia,  especially as the pandemic continues to be a humanitarian crisis. “Governments should look at civil society initiatives to fill in the gaps in their social protection services, such as the case of the community pantries that citizens put up in the Philippines and Thailand at the height of lockdowns,” she said.

Sciortino said that one solution may be diversification of funding: working with one funder and strategy but also having grants in areas not done by local NGOs. She cited as an example the shift from a disaster agenda to gender and safe spaces, but still taking into account prevention of disaster and displacement.

Changes in the Enabling Environment for Civil Society in Asia

Graph 3. Since the COVID-19 pandemic began, CSOs in Asia have received 6 percent less foreign funding on average. This is most visible in Sri Lanka, Thailand, and Pakistan. CSOs in these countries have had to go through a longer processing time since 2020 (with an average of 30 days added) to obtain the same number of clearances required of them. Also noteworthy is the overall decline in CSO participation in policy consultations across all countries, except for China and Japan.
(Source: Doing Good Index 2022)

Suh, for her part, suggested that if CSOs play it right, they can work on issues such as gender, which is a lot less political than human rights. Then again, complications continue to multiply in countries where leaders have emerged with new powers and who have undermined democracy and rights.

Sciortino said that the Philippines, which has one of the continent’s most active civil societies, has been an exception, with laws and constitutional provisions that protect CSOs and affirm their work. This began under the Corporation Law in 1906 that continued for decades. In fact, after the fall of the Ferdinand Marcos dictatorship, the 1987 Philippine constitution that upholds the societal contributions of CSOs was formulated.

But the Southeast Asian country that is now headed by the namesake son of the late dictator experienced a different struggle under the just-ended administration of Rodrigo Duterte. During Duterte’s term, the practice of red-tagging, or labeling human rights defenders and NGO workers as terrorists or communists, became rampant.

For sure, though, many funders are still willing to help — if only governments would let them. Said European Union (EU) Ambassador to the Philippines Luc Veron: “Generally speaking, there has been no shift in the funding landscape. In the last decade, the EU increased its support to CSOs as partners and actors in their own right.”

Veron said that the European Commission adopted in December 2021 the Global Europe Civil Society Organisations Programme worth EUR 1.5 billion for the period 2021-2027 for funding support to CSOs outside of the EU, “as independent actors of governance and development in their own right and their engagement to contribute to inclusive and participatory democratic processes and better development outcomes.”

The program will provide targeted support, strengthen capacities, and increase CSO participation in policy dialogue in partner countries, and contribute to an enabling environment for their work.

The ambassador said that the EU has adopted an “Action Plan on Human Rights and Democracy that addresses the threats to civil society space and a rights-based approach to development that encompasses all human rights and gives a crucial role to civil society.”

With existing and emerging authoritarian governments in the region, Veron said, “it is important for CSOs to continue to strengthen and to empower themselves, to participate in dialogues with multi-development sectors, and to sustain help and collaboration in fostering accountability and transparency.”

But that’s easier said than done these days. Chhay Krivan, the Cambodian human-rights worker, lamented that authoritarian governments — old, new, and emerging — have similar targets of destroying the function of civil society as the watchdog of government

“Our work was to protect and look after the rights of ordinary Cambodians, especially those who don’t have a voice,” he also said. “What was there to be mad about?” ●

National Development Corporation says it has launched 692 projects in Afghanistan

National Development Corporation says it has launched 692 projects in Afghanistan

Uncertainty over BKP’s participation in 2023 election