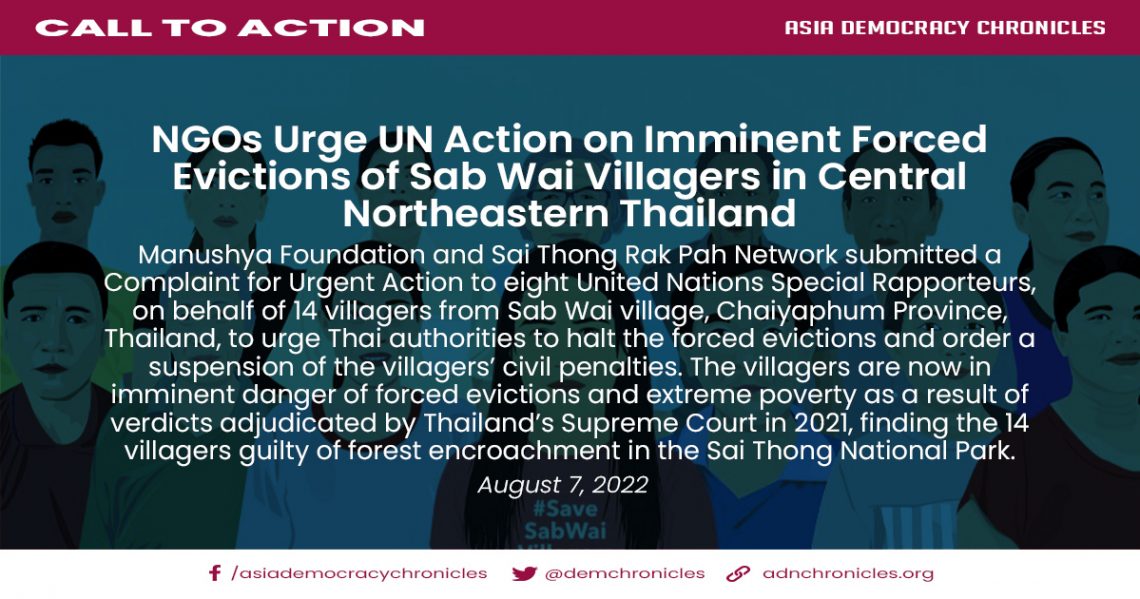 5 August 2022, Bangkok – On 4 August 2022, Manushya Foundation and Sai Thong Rak Pah Network submitted a Complaint for Urgent Action to 8 United Nations (UN) Special Rapporteurs, including the UN Special Rapporteur on extreme poverty and human rights and the UN Special Rapporteur on the promotion and protection of human rights in the context of climate change. The complaint has been filed on behalf of 14 villagers from Sab Wai village, Chaiyaphum Province, Thailand, who were criminalized under Thailand’s false climate solutions and are now in imminent danger of forced eviction and extreme poverty. The situation follows verdicts adjudicated by Thailand’s Supreme Court in 2021, finding the 14 villagers guilty of forest encroachment in the Sai Thong National Park.[1]

In Danger of Homelessness & Extreme Poverty. Forced evictions of the 14 impoverished villagers and their families would breach a number of internationally protected human rights that Thailand has the obligation to respect, protect and fulfill, including the villagers’ right to housing, right to food, right to work, right to security of the person, right to the peaceful enjoyment of possessions, among others. As of now, the Thai government has not provided any appropriate alternative relocation site, and any adequate compensation, further violating international human rights standards relating to forced evictions.

“Our community has lived in the Sai Thong National Park for decades, long before its declaration as a protected area. I grew up in the forest and learnt how to respect it: our way of farming is sustainable and even though the [Thai] government blames us for destroying the forest, we actually help to protect it.” said Nittaya Muangklang, woman human rights defender and Sab Wai community leader who has been tirelessly advocating for the villagers’ right to remain living on their lands and has faced threats and reprisals as a result.[2] “We clearly did not encroach on the national park, and we’ll continue our fight for justice to live with the forest. As poor farmers, we are actually eligible for government’s exemption, but instead we’ve been unfairly cast as criminals” she added.

Manushya Foundation and the Sai Thong Rak Pah Network’s UN Complaint highlights and denounces the imminent forced evictions and recent reprisals against the Sab Wai villagers, and brings attention to the future negative impacts of the evictions on the community including women, children, and the elderly. Beside the loss of food security and disposable income, losing access to arable land would also heighten the community’s vulnerability to climate change impacts.

Need for a #JustTransition. Emilie Pradichit, Founder & Executive Director of Manushya Foundation, further explained: “The Sab Wai villagers are Equal Human Beings who must be heard and recognized as Guardians of the Forest. Their farming focused on sturdy crops such as cassava not only protects the forest from destruction but also ensures resilience against climate change impacts that are going to be felt by local communities all over Thailand. That’s why Thailand must sincerely shift to a Just, Inclusive, Green and Feminist Transition which ensures that community voices are heard and central in the planning and implementation phases of all climate mitigation measures.”

Regardless of its adverse impacts on the most marginalized communities, the Thai government, however, pursues a climate change mitigation pathway relying on forest sinks,[3] aiming at 40% of the total country area to be reforested before 2030.[4] The strategy would be crucial in reaching the new deadlines by which Thailand should achieve carbon neutrality by 2050 and net-zero greenhouse gas emissions by 2065, as announced by the Thai Prime Minister Prayut Chan-o-cha at last year’s COP26.

“Instead of reforming its energy policy to effectively move away from fossil fuels to renewable and clean energy solutions, the Thai government is criminalizing forest-dependent communities and indigenous peoples in the name of reforestation. Our UN Complaint shows that this is a false climate solution that lags behind Thailand’s human rights obligations and climate action commitments.” continued Emilie Pradichit. “The Sab Wai villagers, similarly to communities from all over Thailand, become scapegoats of policies that sacrifice people rather than holding corporations, the real culprits of climate change, accountable,” she concluded.

Stop Forced Evictions & Respect International Human Rights Standards. Manushya Foundation and the Sai Thong Rak Pah Network urge Thai authorities to halt the forced evictions and order a suspension of the villagers’ civil penalties. Under circumstances when evictions are unavoidable, due international human rights standards must be upheld. Manushya Foundation also reminds the Thai government of its commitments taken at its Third Universal Periodic Review in 2021[5] as well as the Glasgow Leaders’ Declaration on Forests and Land Use endorsed by Thailand in April 2022.[6] #

Sri Lanka crisis: India leads aid efforts but US ‘could do more’ as strategic interests converge